THE DIVISION of Europe into eastern and western countries, something that Europe has already had to overcome once, concerns President Andrej Kiska, who deems the current rhetoric of history dangerous and not to be underestimated, the TASR newswire reported on November 5. 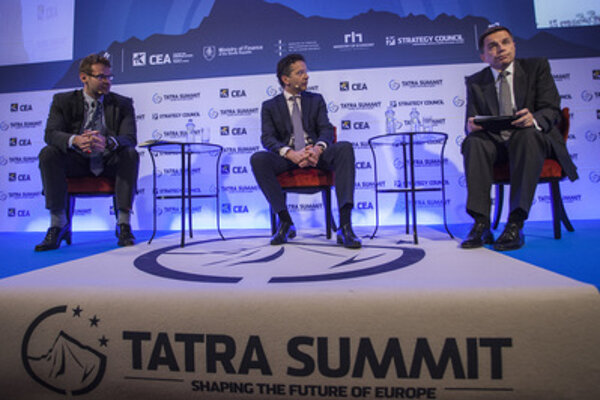 Conflicts within the EU and the current migration crisis were hot topics during the second day of the international Tatra Summit 2015 conference which is taking place in Bratislava November 4 – 6. This is the fourth such conference organised by the Centre for European Affairs; and it is an economic version of the GLOBSEC security conference.

“Sincerely said, we’re creating an impression of mild panic, not only to our own citizens but also to the rest of the world when it comes to the European Union’s very existence,” said Kiska in his speech, as quoted by TASR.

The migration crisis is far bigger than the problems Greece has experienced over the past few years, said Eurogroup president Jeroen Dijsselbloem at a press conference during the summit.

“I’m convinced that a European solution is the only solution possible, said Dijsselbloem, as quoted by TASR. “We have to show solidarity. A certain burden will be carried by the countries to which refugees flee. The rest of the Union should share the remaining expenditures.”

Great Britain's position in the EU was also discussed. The recommendation that British Prime Minister David Cameron presents after negotiations in Brussels, will be pivotal for the decision of British voters on whether to stay in or leave the European Union, said British Minister of State for Europe David Lidington

“The aim is to facilitate reforms that would benefit the whole of Europe but at the same time will help the British to feel more comfortable within the EU,” Lidington said, as quoted by TASR. “If Europe doesn’t become more competitive, democratic and flexible than it is now, the economic, social and political tensions will get worse.”

Furthermore, a specific proposal for a joint programme for the presidency of the Council of the European Union has been drawn up at the Tatra Summit by the trio of countries - the Netherlands, Slovakia and Malta that are due to assume the presidency as of next year

The main aim is to reach agreement on matters to be dealt with during the 18 months of the joint presidency held first by the Netherlands, followed by Slovakia and then Malta. Three pivotal topics should be included - Energy Union, a single digital market and a capital markets union.

“We’ve come to an agreement that as of November 15 we would like to have it [the programme] fine-tuned so that we can communicate it to other member states and send it to the Council for approval,” said Foreign and European Affairs State Secretary Ivan Korčok, as quoted by TASR, who is also proxy for the Slovak presidency of the Council.

On its last day, the summit will focus on private investments, innovations and the EU’s strategy for growth.