ŠTEFÁNIA Lorándová saved hundreds of lives during the holocaust forging documents for Jews in Hungary who could then escape from the country. Ultimately she ended up in a concentration camp. Far-right party People’s Party Our Slovakia filed a criminal complaint on October 29 for publishing her story. 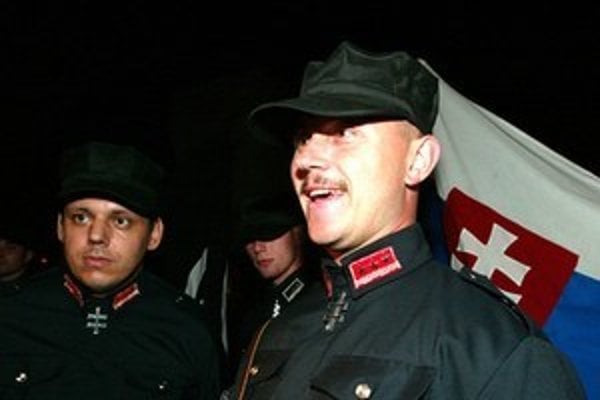 In the past, Marian Kotleba used to wear a uniform that greatly resembled the uniform of the Hlinka Guard, a wartime Fascist organization in Slovakia. (Source: Sme)
Font size:A-|A+41

NGO Post Bellum which documents the memories of witnesses of the important historical phenomenons of the 20th century published her story as part of their exhibition commemorating 70th anniversary of the end World War II in Banská Bystrica. The party filed the complaint, claiming that her story promotes violence and suppression of human rights.

“We were surprised and I think that this is their way how they promote themselves,” Post Bellum head Lenka Kopřivová told The Slovak Spectator.

Some days earlier the party’s leader and Banská Bystrica Self-Governing Region (BBSK) governor Marian Kotleba approached secondary schools in the region with the request to re-schedule cultural events and discussions to the afternoon, extra-curricular hours. Instead, he recommended them to organise beauty pageants.

This was done in order to prevent the events of the Stop Extremism! project to take place at schools. Kotleba first scrapped the project of granted state donation and later – when they were to take place anyway – they should be replaced by beauty contests, according to Marian Pecko, the art director of the Puppet Theatre at the Crossorads which runs the project.

Štefánia Lorándová was a member of Hashomer, the Jewish defence organization originated by Zionists, during the Second World War. Its members were joining the fight against Nazism and helping Jews flee from Nazi countries.

In its criminal complaint People’s Party Our Slovakia refers to a United Nations Security Council resolution from 1975 where it “determine[d] that Zionism is a form of racism and racial discrimination”.

What the party did not mention is that it was politically motivated resolution which was later cancelled in 1991, reads the Post Bellum statement.

It is, however, encouraging that the party refers to a UN resolution against any form of racial discrimination, according to Post Bellum.

“The basic idea of this document is that all people, no matter what their race or nationality, are equal,” read the organisation’s statement. “We call on People’s Party Our Slovakia to honour and follow this general principle.”

The party is wrong when it says that Zionism is an ideology suppressing human rights, according to Katarína Hradská, a historian with the Slovak Academy of Sciences. Zionism was a modern Jewish nationalism preaching the need to create a Jewish state. Its followers were educating themselves, studying Hebrew or Yiddish and improving their physical condition, in order to help them adapt to demanding conditions in their new homeland.

“Zionism, its ideas and practical pursuit of them was not connected with violation of human rights and freedoms in any way,” Hradská told the Slovak Spectator.

Argumentation of Slovak ultra-nationalists criticising Israeli nationalism is hypocritical and factually inaccurate. The filing of a criminal complaint is an expression of anti-Semitism. Far-right parties hide it with an alleged fight against Zionism to avoid being called anti-Semitists, according to political scientist specialising in extremism Tomáš Nociar.

“Such statements can be considered as signs of real ideological background of some party’s main representatives,” Nociar told The Slovak Spectator. “They try to gather political support with issues like an anti-Roma agenda or criticism of traditional politicians, but at the same time they show hard core of activists that they don’t forget traditional issues of far-right extremism such as biological racism, anti-Semitism and anti-democratic sentiment.”

Valentína Kaliská is the head of the students’ board at Grammar School of Andrej Sládkovič in Banská Bystrica. Currently, the board is tasked with organising a beauty contest at the school, but students are not very enthusiastic about that and feel that they were forced to do it, according to Kaliská who called the contest a “primitive event”.

“I don’t like that we are indirectly forced to organise this event,” Kaliská told the Sme daily. “We are preparing it because we were forced to, but time will show how this will end.”

Students approached by The Slovak Spectator and Sme see a connection between contests and the dispute of BBSK with the Puppet Theatre at the Crossroads. Even writer Jana Juráňová who was the first one to point out this issue considers Kotleba’s steps to be a reaction to the theatre organising anti-extremists events at schools.

A puppet theatre, received a grant of €6,985 from the Foreign Affairs Ministry for a project entitled Stop to Extremism concerning the problems of extremism, xenophobia and racism in society. The authors wanted to address secondary school students from lower income municipalities in the region and prepared a play and a course together with Amnesty International.

Kotleba, however, refused to sign-off on the allocation, complaining about the presence of Amnesty International and the way the project wanted to present the issue. Under current rules, all grant agreements must be signed by regional governments if they own the theatres.

Subsequently the theatre received €1,629 via a public collection and asked for a subsidy from the Orange Foundation. In addition, members of the BBSK regional parliament donated about €7,000 to the theatre. The theatre is using the money to implement the project at schools despite Kotleba’s protests.

BBSK’s recommendation to organise a beauty pageant came only a few days after Kotleba’s office requested schools to re-schedule cultural events and discussions which is just another way to fight against theatre. The pageant therefore functions as a distraction from this serious issue, critics say.

BBSK refused such interpretation. The regional beauty pageant was planned long before Kotleba refused to sign the funds for Theatre at the Crossorads’s project Stop Extremism, according to BBSK spokesperson Michaela Piliarová.

“School directors were complaining that events and discussions running at schools disrupt the education process at schools,” Piliarová said.

This argument is strange because directors have the power to decide when and what events will be organised during the school hours. When they do not want to have an extensive number of those events they simply will not allow them, according to Vladimír Burjan, editor-in-chief of Dobrá Škola (Good School) magazine.

“I consider it to be inappropriate intervention of BBSK to schools’ education process,” Burjan said. “This is not in the schools' founder's [BBSK] competences.”

Also Pecko considers those steps as inappropriate saying that since Kotleba started to put pressure on schools, they have been withdrawing from agreements with the theatre.

“I don’t want to comment on the behaviour of those schools, but it seems to me that it is fear of the region’s head behind it,” Pecko said.

Altogether 35 of 60 secondary schools in the Banská Bystrica region positively responded to the BBSK office call to organise beauty pageants. The contest is for girls who are 15-years-old and older and who do not smoke, while it should not be just a regular beauty pageant.

“In this way we wanted to motivate young girls in our region to become young ladies who know how to mannerly express themselves and at the same time know how present their abilities and talents,” Piliarová told The Slovak Spectator.

The contests will be held at schools and winners will make it to regional finals personally attended by Kotleba.

“It seems like it is pre-election campaign of Marian Kotleba,” Pecko said.

The image of beauty pageants is constantly worsening, according to Vladimír Burjan, editor-in-chief of Dobrá Škola (Good School) magazine.

“Such competitions should not be at schools,” Burjan said. “There are dozens of better competitions for students than this one.”

In general such actions have no added value and just displaying young girls to be admired by the public is sexist. Some children may be hurt by failure, according to Katarína Holbová, school psychologist at a vocational school in Nové Mesto nad Váhom.

“There are children who will be sad that they did not succeed and there will be ones who forget about it after one day,” Holbová told The Slovak Spectator. “It depends on their age and personality.”

On the other hand, similar beauty pageants are organised at secondary schools every year. It is the first time, however, that they have a regional final round, according to Grammar School of Andrej Kmeť Director Renata Mikulášová.

“However, it's true that also our student board has mixed feelings about that because students see it as a directive from above,” Mikulášová told The Slovak Spectator. “We have not discussed the issue more than was necessary.”