Bathing with the enemy?

LOOKING at the picture of a neat and prosperous spa in Vyhne, one would be saddened to learn that it no longer exists. 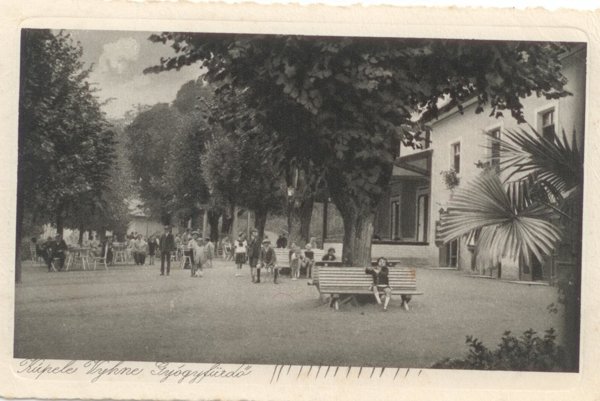 This postcard dates back to 1938, but this spa is mentioned already in the 13th century – which is quite an imposing age, even in a Slovak context. Rumours have it that miners were the first to discover healing springs while hollowing an underground road. There might be a great deal of truth in this legend, as Vyhne is located directly in the mining region of Hauerland where this industry was flourishing as early as the Middle Ages.

In the 14th – 16th centuries, the rich Rössel family of the nearby town Banská Štiavnica owned the spa. By then, a relatively large house of bricks stood there. Afterwards, it was owned by the town of Banská Štiavnica, until 1917. By that time, it had become a sought after Central European spa.

During the Middle Ages, people bathed here in two pools – one was designated for the nobility, and the other for commoners. From a modern point of view, this seems snobbish and unkind, but at that time it was normal. Guests like the Hungarian palatine Archduke Joseph with his wife, or the rebelling nobleman Joseph II. Rákóczi, would never bathe in the same pool as their subjects. Even the two of them would never enter the same pool, as the palatine represented royal power while Rákóczi was an anti-Hapsburg rebel.

On the other hand, we can perceive the ancient reality positively too – the ever and ever repeated image of the Middle Ages as a boring and humdrum Dark Age is being busted by bathing spa guests.

After the Czechoslovak Republic was founded in 1918, Vyhne lost its Hungarian guests; the owners thus re-focused on Jewish clients. In the former Turistický dom (Tourist’s House) Hotel, a kosher kitchen was established, and a new stylish dining room , the Sect Pavilion, was built. Jews also came to Vyhne during World War II; unfortunately the spa had been turned into a work camp.

The war front crossing the area was fatal for Vyhne – the whole complex caught on fire. As the burnt area remained unwatched, everything was gradually stolen; the remains of construction materials were later used to build a local brewery. The rest was levelled with a bulldozer.

This is the sad end of a spa used by people for more than 700 years. Nevertheless, local hotels have tapped into tradition and offer spa services in their own wellness facilities with the thermal water.