Industrial production up in September

AFTER the slight drop in August, industrial production increased again in September, especially due to the restored production in the automotive sector. 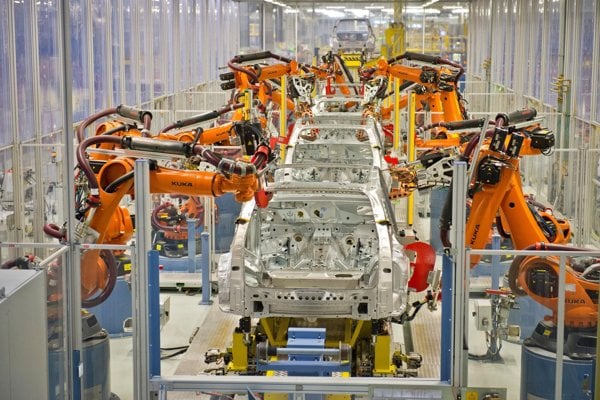 The industrial production index (IPI) rose by 7.2 percent year-on-year in September. The development was affected by a growth recorded in manufacturing by 8.2 percent y/y, electricity, gas, steam and air-conditioning supply by 1.8 percent y/y and by a decline in mining and quarrying by 12.3 percent y/y, according to data received from the Statistics Office.

“This means that the industry, after a short stint operating in the red in August, restored its relatively dynamic annual growth,” Ľubomír Koršňák, analyst with UniCredit Bank Czech Republic and Slovakia, wrote in a memo.

Growth in September was surprising as it was originally anticipated that the industrial production would only increase by 5 percent, according to Tatra Banka analyst Boris Fojtík.

However, the increase, was not the same in all sectors. More than 80 percent of the annual growth results from restored production within the automotive industry, which grew by more than 20 percent y/y, according to Koršňák.

“It seems that the problems in the developing markets (especially Russia and China) can still be compensated by increasing European demand,” he continued, “moreover, the figures probably reflect the effect of launching new investment plans into operation at the biggest Slovak automotive plant. It is worth mentioning however that the emission crisis which emerged in late September has not yet impacted upon the automotive industry in Slovakia.”

The sentiment indicator predicts that the scandal will not affect Slovak producers even during October and that they expect further growth in production, the analyst added.

Except for the automotive sector, relatively strong growth was also reported by the metallurgy sector (8.9 percent y/y) and rubber and plastics producers (7.8 percent y/y), which are both linked to the automotive industry. Conversely, the electrotechnical industry reported a drop in September, Koršňák said.

As for the forthcoming months, Fojtík expects that industrial production will continue to increase, oscillating between 5 and 6 percent.