THE ROBERT Fico cabinet has proposed a general government budget for 2016 with an ambitious deficit shrinking to 1.93 percent of GDP. 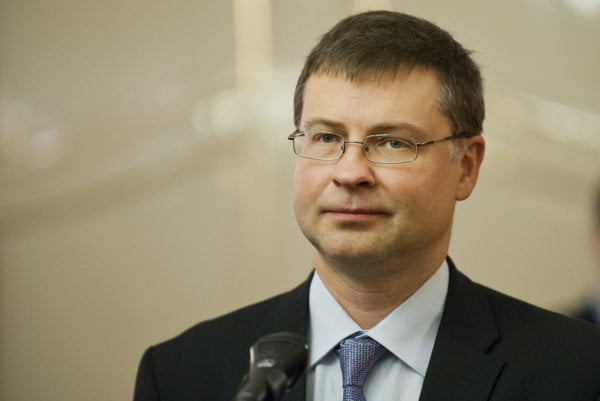 The parliament is set to begin debating it, along with several measures from the so-called second social package, on November 18. But the European Commission, in its later forecast, while noticing continuation of Slovakia’s economic recovery, perceives measures already adopted as well as those planned within social packages as the main budgetary risks.

Finance Minister Peter Kažimír admitted that the budget has some characteristics of an election budget as Slovakia will hold parliamentary elections on March 5.

“To a significant degree, this budget will be carried out by the government that will arise from the next parliamentary election,” said Kažimír on November 3 as cited by the TASR newswire. “A lot will depend on how the newly formed government embraces these goals.”

The state budget deficit for 2016 is projected at €1.97 billion (down from €2.984 billion projected in 2015) with revenues of €14.027 billion and expenditures of €15.997 billion. The budget is based on macroeconomic projections that the country’s economy will grow at 3.1 percent, the unemployment rate will fall to 10.6 percent and the inflation rate will be 0.9 percent in 2016. The plan is to continue consolidation of public finances moving toward a balanced budget in 2018.

Apart from the budget, legislators are also expected to greenlight a natural gas cash rebate for which the cabinet has allocated €48 million as well as reduction of value added tax on selected basic food, from 20 to 10 percent, costing the state treasury about €77 million. Other measures from the €200 million second social package include assistance to less developed regions, increase of benefits for families, a subsidy towards heating insulation of people’s homes and further investments aimed at increasing energy efficiency.

Social packages are a risk

The European Commission in its Autumn Forecast 2015 released on November 5 points to booming investment, supported by intensified drawing on residual EU funding available under the 2007-2013 programming period, as driving growth in Slovakia’s economy this year. It projects real GDP to grow by 3.2 percent in 2015, by 2.9 percent in 2016 and then 3.3 percent in 2017.

“Although investment growth will tail off after the exceptional boost from the last programming period, it will largely be offset by stronger private consumption and net exports,” the forecast reads. “The latter are anticipated to contribute positively to GDP growth from 2016 and to strengthen in 2017. The labour market situation is expected to further improve over the coming years, in line with the growing economy. Inflation is expected to remain negative this year, dragged down by falling energy prices, but it should turn positive and gradually accelerate over the forecast horizon.”

European Commission Vice-President for the Euro and Social Dialogue Valdis Dombrovskis said when commenting on the forecast in Bratislava that Slovakia’s economy ranks among the fastest-growing not only in the eurozone but in the EU; but more focus needs to be directed at modernising public administration and improving the drawing of EU funds.

According to Dombrovskis, the budget shortfall in Slovakia has been shrinking constantly, hence the EC expects no problems in the future in this regard. That said, the Latvian commissioner singled out several areas that would benefit from enhancements, such as the streamlining of public administration, more effective public procurements, the healthcare sector, bolstered regional development and improvements to the utilisation of EU funds.

“It’s good news for Slovakia that the European Commission sees Slovakia as being on the path to preserving growth. The (growth of) 3+ percent for this year is among the EU’s and eurozone’s highest,” he added.

Similar to the Slovak Finance Ministry, the EC does not include in its forecasts the effects likely to be brought by the planned investment by Jaguar Land Rover.

For 2016, the EC forecast includes reimbursements to households due to lower gas prices (part of the first social package) and measures adopted under the second social package, including the reduction of the VAT rate on basic foodstuffs from 20 percent to 10 percent and subsidies for home insulation and school field trips. The EC has calculated these measures should amount to some 0.3 percent of GDP.

For 2016 the EC forecasts the general government deficit at 2.4 percent, which is by almost 0.5 percentage points more that the Slovak Finance Ministry in its draft budget.

“The already announced third social package, which is to be detailed in December, represents the main risk to the forecast in 2016,” the EC writes in its paper.

The package with the price tag of €400 million should contain, for example, Christmas pensions for 1.5 million pensioners.

“Other negative risks stem from up-front costs for the planned PPP project of the Bratislava ring. Assuming no changes in policies, the deficit in 2017 is projected to decline to 2.0 percent of GDP, reflecting the acceleration in economic activity,” the forecast reads.