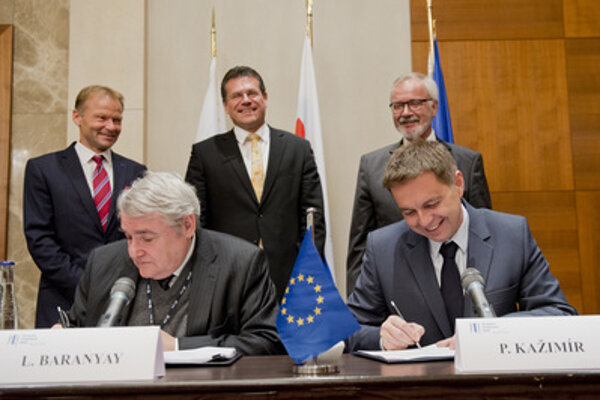 “The physical presence of such a large bank in Slovakia means that we’re a step closer to being able to succeed with our projects,” said Kažimír, according to whom the EIB plays an important role in the financing schemes concerning everything Europe needs.

The office will ensure our physical presence in Slovakia and market accessibility.

At the ceremony, Kažimír and EIB Vice-President László Baranyay signed a €350 million loan from the EIB to co-finance priority projects cleared for financing from the EU funds in the programme period of 2014-2020. This is the fourth loan in the sphere of co-financing of projects supported by EU funds. The EIB has already provided loans of €95 million in 2004, €1.3 billion in 2010 and €600 million in June 2015.

The EIB represents an EU financial institution, whose stakeholders consist of member states. It provides long-term financing for important investments, with loan commitments towards the EIB in Slovakia equalling approximately €6.6 billion since 1993, when the bank started to operate loan activities in the country. Currently the bank has offices in 20 member states and 19 countries outside the EU.