IT IS mostly doubt, fear and chaos that jeopardise freedom, democracy and European security, according to President Andrej Kiska. 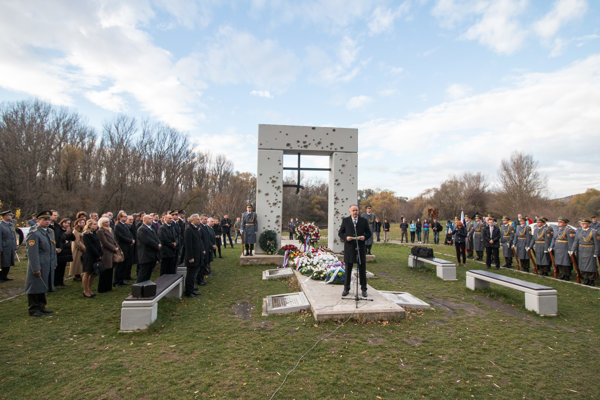 He said so at the Gate of Freedom Memorial in Devín (near Bratislava) during a memorial service dedicated to victims of the communist regime, commemorating the 26th anniversary of the Velvet Revolution. The site in Devín is where scores were shot or drowned trying to swim across the Morava River to get to Austria during the four decades of communist regime.

“Either by the weapons of terrorists and fanatics or political short-sightedness, radicalism and extremism, doubts, fear and chaos serve to undermine European unity and thus weaken Europe from within,” Kiska continued, as quoted by the TASR newswire.

Kiska harboured the conviction that Europe will find ways to bolster its security, provided its member states remain united in their approach.

“However, this will only be accomplished if we remain aware of what we're protecting today ... our freedom and democracy,” Kiska added, as quoted by TASR. “What’s put to test today is European solidarity with each other and the sense of European unity.”

The recent terrorist attacks in Paris inspired a great wave of European solidarity and determination on the one hand; but on the other, gave rise to doubts, extremism and political radicalism, according to Kiska.

The president also recalled that at times when people had to emigrate for freedom before 1989, society was demoralised by the level of distrust prevailing among people.

“The state propaganda brought about a climate of fear and a lack of trust,” Kiska said. “The encouragement of ignorance and dissemination of lies. Therefore, if we talk about our security today and how our people live in Slovakia and how safe and secure they feel, let's always talk first and foremost about security protecting values of freedom and democracy for people in Europe. Our security means the protection of values and principles for which people cut the fence [Iron Curtain] back in 1989. The protection of values that have kept us together ever since.”

Meanwhile, Prime Minister Robert Fico invited 19 university students from seven schools to the ceremonial lunch on the occasion of the Fight for Freedom and Democracy Day and International Students Day which falls on November 17. He  said that students today should maintain the ability of critical thinking, as it will help them create a picture of what happened pre- and post-1989 and also make sense of current political events shrouded in a vast array of conflicting information.

“I’ve always had criticism heaped against me for my statement that not everything in the pre-1989 era was bad,” Fico said, as quoted by TASR.

Many people worked diligently and honestly during the socialist regime, a trend worthy of respect and following up, according to Fico.

“They created wealth that later the independent Slovak Republic was founded upon,” said Fico, as quoted by TASR, adding that, however, there were also aspects of the regime, that “were bad and need to be condemned”.

Following the fall of socialism, a viable political system was built in Slovakia, based on multiple political parties, said Fico.

“Some could object that it’s a bit too viable, but we’re part of Europe now and such traditions here are proper,” claimed Fico, adding that Slovakia is perceived as one of the countries with the best levels of freedom of the press.