November trees in a revolutionary forest

If Slovakia rejects refugees in wake of recent attacks, the message of November 17 has truly been lost. 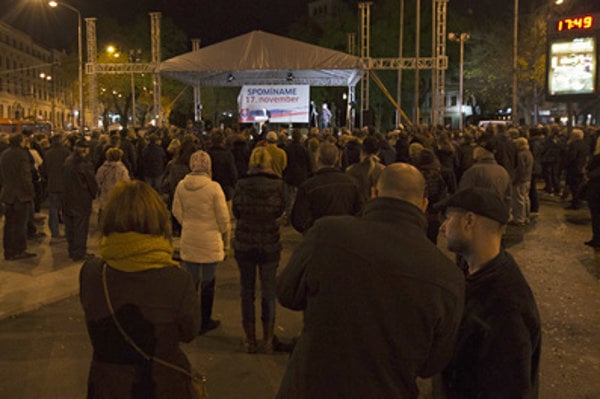 Seen from North America, the events of 1989 that ended Communism and the grip of Soviet Russia in central and eastern Europe seemed like an early Christmas present: welcome and joyous, but not entirely unexpected. During America’s massive military buildup under Ronald Reagan in the 1980s, and Reagan’s incessant browbeating of Moscow from the moral high ground (“Mr Gorbachev, tear down this wall!”), cracks had begun to appear in the foundations of international socialism. Perestroika and glasnost were not the slogans of a confident regime, after all, but of a frantic Kremlin trying to revive an exhausted patient before he expired.

Up close, however, there was less sense of inevitability. Czechoslovakia celebrated heroes who had ended 40 years of tyranny, from the students in Prague and the hundreds of thousands who followed them into the streets, to leaders like Havel, Kňažko, Čarnogurský and Dubček. It was enough, perhaps, to elect them, and what had been promised would be delivered.

That this did not – could not – happen is by now clear to us all. Our heroes were too flawed, their prescriptions too timid, our own expectations too giddy. Slovaks not only had no idea what was in store for them, they had no inkling of the historical process that had swept them up – a gradual, achingly painful evolution towards greater prosperity and liberty around the world. Again and again they huddled around leaders who promised greater security, equality and prosperity – Mečiar, Dzurinda, Fico – while real threats like greed, corruption and tribalism flourished unchecked. Again and again they entrusted the management of public affairs to charlatans, ignoring the facts but hoping for the best – and were disappointed.

Now, again, we have reached a revolutionary moment. Like Slovaks 26 years ago, millions of Africans and Arabs are demanding freedom from poverty, war and tyranny – not that of Communism, but of radical Islam. They too have turned to Europe to deliver it. And once again, we are not seeing the forest for the trees. We find ourselves huddled around a leader who issues fatuous promises to protect us from violence by keeping Muslim refugees from our soil, and by conflating moderate Islam with the murderous gangsters who seek to destroy Western civilization.

By now, surely, we know the truth: that justice, security and prosperity are universal human aspirations, and cannot be successfully delivered in Slovakia if they are denied in Syria. That our own 1989 revolution was not the culmination of a uniquely Slovak story, but merely another point of light on a slowly brightening globe. That, and not Fico’s Fortress Slovakia, is the true meaning of November 17.