Reconstruction of the Bratislava Castle will swallow further millions

SHORTLY before the next general election, the second phase of the reconstruction of the Bratislava Castle is expected to be concluded. However, it is not quite clear what happened to the unique archaeological findings – as they are hidden behind a fence – and the expenses will be several millions higher. 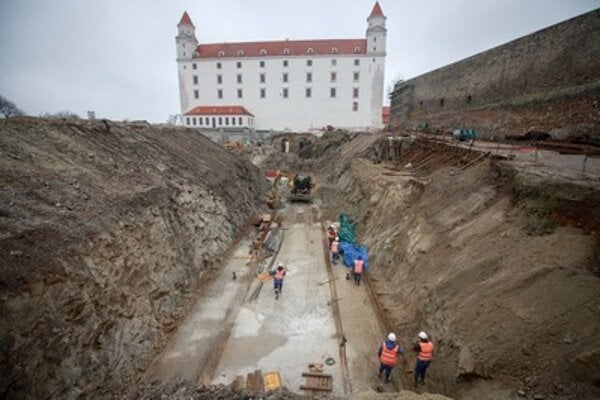 “With the Slovak National Museum, we are preparing to open the reconstructed findings of Roman paving under the courtyard by the beginning of 2016,” Martin Dorčák of the Parliamentary Office told the Sme daily. The castle roof exhibitions are operated by the Slovak National Museum, but the Slovak Parliament operates the premises as well.  Other areas – the garden, underground garages and part of the Winter Riding School – should be approved and opened to the public prematurely, too. “The main reason is the possible use of spaces before the time when Slovakia becomes the presiding country of the Council of Europe,” Dorčák added, hinting to the July date.

The original order for reconstruction was around one billion Slovak crowns (about €30 million), with the Váhostav company owned by tycoon Juraj Široký, alleged to have close ties to the ruling Smer party, being the main contractor. Later, it increased to €100 million; after the rightist coalition took over in 2010, repairs were made only for €61 million, while other parts were supposed to be reconstructed for €26.1 million. However, the project’s price increased after the monuments and historical artifacts were unearthed.

The deadline for completing the works – shortly before the March 5 election – is no coincidence, archaeologist Tatiana Štefanovičová told Sme. “This is a part of the election campaign, and they are doing everything they can to make the deadline,” she said.

The Castle reconstruction should be ultimately finished by August 2017; the deadline has been postponed due to monument protection and preservation, as well as their changed presentation to the public, according to the Parliamentary Office. The adjustments shall cost two to three million euros.

Speaker of Parliament Peter Pellegrini will open a new tender, and not allocate the order directly to Váhostav which has been reconstructing it until now.

Many experts opine that the Celtic-Roman findings have been destroyed forever beyond repair, due to insensitive interventions. Part of the findings will be covered with earth during the work on garages, part was moved elsewhere, part exhibited. However, it is not possible to check what has happened to them because they have been fenced off. Not even the public pressure has changed much of the original plan to build the underground garages, as far as activists and civic associations were able to get information, according to Sme.