Poppy heads should grow and develop 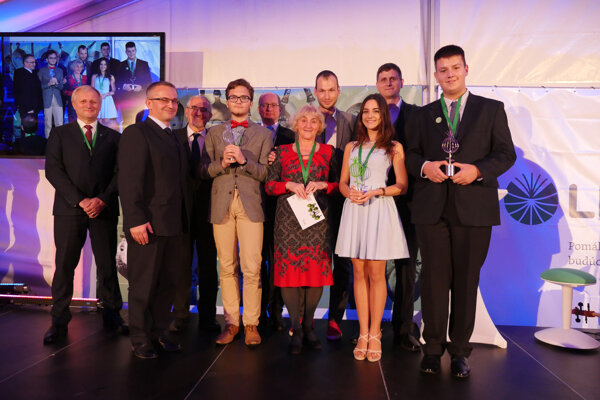 A RELATIVE of Ondrej Vrábel (14) from Senica suffers from cerebral palsy. When spending time with her, Ondrej realised that ordinary games are chaotic and inappropriate for people with such a diagnosis. To help Dáška tell the time, speak better and recognise letters, he developed so-called Pinf Games, which are unique in the world and are now used in various centres and families. He also translated the games into English and stared a crowdfunding campaign.

“It was hard from the beginning,” Vrábel told The Slovak Spectator.

He tried to introduce the games at specialised websites, but the response was negative as it was too simple for them. This caused him to stop the project for a while.

“But I started again because I saw it helped Dáška,” Vrábel continued. “And my teacher told me to promote it, make a website… And this is how it started.”

Vrábel is one of three young people who received the Leaf Awards (also called Poppy Heads) on November 14. The aim is to search for young people aged 10-16, support their growth potential and help them develop into mature people who will want to help Slovakia to progress, according to Miroslav Kocúr, the manager of the project.

The Leaf association, which organised the awards, registered applications from 103 young people, from which it then picked six stories of how young people helped their environment.

“We were pleasantly surprised by the interest, but mostly the quality,” Branislav Jakabovič of Leaf told The Slovak Spectator. “It is unbelievable what they can do in such age.”

President Andrej Kiska, under whose auspices the Leaf Awards took place, praised the fact that the event is about young people and their education, but also the form of support which Leaf can give them to continue developing.

“If we combine the talent of our young people with the will to help them develop this talent, then Slovakia will move in the right direction,” Kiska said.

Inspirations for the others

The three winning projects were picked by a six-member jury, composed of sociologist and president’s advisor Martin Bútora, rector of the Slovak University of Technology in Bratislava Robert Redhammer, vice-president of the Automotive Industry Association in Slovakia Jaroslav Holeček, one of the founders of the first private grammar school in Bratislava Mária Smreková, partner at LRJ Capital fund Peter Irikovský, and student of King’s College London Kristína Uličná.

The prize also went to 15-year-old Dominika Geregová from Banská Bystrica for her Children to Children project. She runs an interactive workshop where pupils of the local primary school create various handmade things which are then sold on the internet. The money is then used to help oncologic children.

The whole idea developed when she had to prepare a year-end project at her school. She created a website where she was offering her handmade products to people. She started thinking about how to use the money she gets from sales. Then one of her friends took her to the oncology ward at the local hospital and she decided that this is what she wants to do.

Moreover, Geregová also helps by motivating other, healthy children to lend a hand. They also create handmade things together which they then sell on the internet.

“This project helps both sides,” Geregová told The Slovak Spectator. “The [healthy] children realise that there are also other children in the world who need help. And the [ill] children are pleased that somebody visits them.”

Another laureate is Jozef Tanzer, a 16-year-old from Bratislava, who has achieved great results in several projects of community character which he links with digital activities. He is a member of various voluntary student groups, like ID SPACE Team, the Pre Stredoškolákov website, or At Coffee with Possibilities project. He co-founded and coordinates the QuakeResq device, to detect and diagnose earthquakes. He also contributes to developing a mobile application.

The motivation to start new projects came when he and his friends won the Social Impact Award.

“This started us up, as we were doing something which had sense and we were trying to achieve something,” Tanzer told The Slovak Spectator.

The winners will now receive individual support. This means that Leaf will try to find ways to support the projects so they can develop further, Jakabovič explained.

Some participants have, however, already seen the growing support to their projects. Geregová, for example, made new contacts and people started offering their assistance, for example with creating a new version of her website.

Also Vrábel hopes that the participation in the Leaf Awards will help to develop his Pinf Games projects and spread information about them further, for example to special schools.

Three other nominees who were not awarded praise the promotion of their projects, and agree they are not disappointed.

Tomáš Miškov (16), who now studies in Krakow, is currently working on an online competition where the participants will solve logic tasks to develop a positive addiction. He also helps with organising the TEDx Youth event. He is determined to continue with the project with logic games and find other ways of support.

“It is something which I like and I will continue in it,” Miškov told The Slovak Spectator.