Law of the year adopted 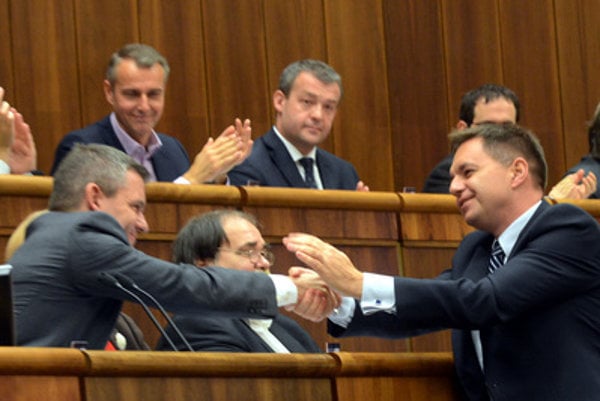 SLOVAKIA has a budget for the election year of 2016, as the parliament, dominated by deputies of the Smer ruling party, passed the law of the year after a two-day discussion.

“This budget expresses stability of the development of our economy,” said Finance Minister Peter Kažimír as cited in the ministry’s press release, adding that Slovakia’s economy is faring well which also international institutions assess positively.

The minister recalled that also the European Commission, according to which the budget is in line with rules of the Stability and Growth Pact, has evaluated the budget positively. Only five countries out of 16 of those assessed have received this evaluation. Apart from Slovakia they include Germany, the Netherlands, Luxembourg and Estonia.

The general government deficit is projected to reach the level of 1.93 percent of gross domestic product (GDP) in 2016 and should gradually decrease over the next few years with 2018 being the year of achieving a balanced budget. In absolute terms, the deficit is to reach €1.557 billion in 2016; the budget also presumes a decrease of public debt to 52.1 percent of GDP.

The parliament approved the state budget for 2016-2018 on November 20 with 80 votes out of 135 present members of parliament, while 42 were against and 13 abstained from the vote.

According to Kažimír, there is still a dispute whether there are enough sources in some sectors, for example, health care and education.

The Health Ministry assures that there will be money for wages of medical workers. This year health-care wage costs caused problems for hospitals and thus the state allocated an additional €81 million to the health-care sector. In total the sector should receive €4.65 billion from public resources in 2016.

“It will be allocated by an independent regulation,” said Peter Bubla, spokesperson of the Health Ministry as cited by the TASR newswire, adding that the increase in the minimum wage will be covered too.

Along with medical workers also teachers and other workers in the education sector keep asking for better remuneration. But the Education Ministry’s budget for 2016 will shrink by €266 million to €1.23 billion due to lower funding from the European Union including state money for co-financing which will decrease by €312 million to about €137 million.

On the other hand, the Defence Ministry will have more money at its disposal when its budget will increase by 10.5 percent or €84 million compared with 2015 to almost €881 million. Total defence expenditures will increase too, to almost €890 million. This accounts for 1.10 percent of GDP while in 2015 it was 1.03 percent. Based on the agreement with NATO, member countries should invest 2 percent of GDP into defence.

Part of the adopted budget is the introduction of natural gas rebates to households. This is one of measures of the second social package by Robert Fico cabinet. Fico said in June that those who use natural gas only for cooking would receive €10, while other gas consuming households would get from €14 to €165.

The opposition criticises the adopted budget. The Christian Democratic Movement (KDH) perceives the budgets as an expression of selfishness while, according to Miloš Moravčík, KDH vice-chairman, in the budget the government has forgotten about employees, students, active seniors and the self-employed as their standards of living are harmed the most by high income and payroll taxes.

Jozef Mihál, deputy for the Freedom and Solidarity (SaS) party pointed out that during four years of the Fico government, taxes and levies increased significantly but these increases have not brought more to people who need it. He calculated that taxes on the self-employed increased by 26 percent during those four years but on the other hand parents’ benefits and benefits for children increased by only 4 percent.

Already before parliament adopted the state budget, the Council for Budgetary Responsibility as well as the European Commission had pointed to many risks embodied in its draft, while among them are the already approved social packages. The EC has calculated that gas rebates, VAT reduction on selected foods and others measures from the social packages should amount to some 0.3 percent of GDP.