SLOVAK nurses dissatisfied with how the Health Ministry has dealt with complaints about pay and working conditions started to hand in their resignations on November 25. 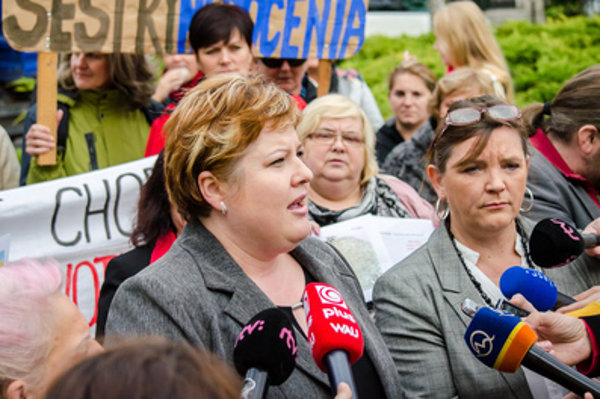 Over 200 nurses from Žilina Hospital submitted their notices on that date, with more nurses from hospitals around Slovakia expected to follow suit shortly, Nurse and Midwives Labour Union head Monika Kavecká informed the TASR newswire.

“We’ve decided on this extreme measure because nobody listens to us...” Kavecká said. “Žilina has begun today, some 200 nurses and midwives submitted their resignations this morning as they just couldn’t wait any longer.”

The resignations form a protest against the game that the government has been playing with the nurses for three years, the head of the Slovak Chamber of Nurses and Midwives (SKSaPA) Iveta Lazorová asserted. She went on to describe the bill on the salaries of health care professionals which was approved by parliament on November 25 as a farce. “We’re not at all pleased at having to take this measure, because we’re aware of what will ensue, and it won’t be easy, she continued. “However, we don’t know any other way of exerting pressure on those in power to properly address  the situation in the health-care sector.” She added that the protest is not only about salaries, but about improvements to the sector as a whole.

The representatives of the nurses and midwives said that more notices will be filed by the end of November with an eye to making sure that the two-month notice period begins to run from December 1. “The nurses will be unemployed as of February 2016,” said Lazorová, but added that they will actually leave their posts earlier due to the remainder of their holiday allowance and planned time off for prior overtime work. She noted that the nurses will not backtrack on their decision unless their demands are met. The process of leaving a job takes about two months. Earlier this year a similar situation occurred at Žilina Hospital and on that occasion the resignation notices of doctors and nurses were able to be rescinded.

Under a bill approved by parliament, health-care workers both in state and private hospitals will see their salaries increased as of January. The rise will apply to over 20 health care professions including nurses, medical laboratory technicians and orderlies, but not to doctors – who have already seen their salaries increased under a different piece of legislation.

The nurses and other medical workers have a total of five demands: a proper level of funding for health care facilities and a bill not only applicable to hospital staff but also to personnel in doctor’s offices, spas and social service facilities. They also insist that maternity leave and time spent unemployed be counted towards the period of their specialised experience, as well as on hiring extra nurses and midwives to hospitals, and on factoring the number of years one has worked in the sector into the calculation of the pay-rise.

The departures of some 1,200 doctors from hospitals rocked Slovakia in late 2011, and prompted the authorities to declare a state of emergency in dozens of hospitals. Parliament later amended pertinent legislation to the effect that health-care workers who endanger the health and lives of people during a state of emergency may be liable to punishment.

The nurses who have filed mass resignations are probably not entirely convinced of the line of reasoning of their representatives, Health Minister Viliam Čislák said. He added that this is evidenced by an agreement on solidarity that the outgoing nurses are reportedly signing alongside their notices. Under the agreement, any nurse who withdraws her resignation will be required to pay the nurses’ trade union €3,300 within seven days. The Minister added that he cannot fathom why the nurses’ trade union would commit the nurses to such an action if they find the bill on their salaries to be poor; and he handed out the agreement to journalists. The document also reads that the penalty will go towards a fund to make up for the loss incurred by those who will have made good on the agreement. Čislák said that the agreement would cost €200 million rather than the €55 million envisaged in the bill approved in parliament. He went on to call the agreement a compromise, adding that he hopes the nurses who have faith in him outnumber those who don't.

Doctors’ unions have expressed solidarity with the nurses, TASR wrote.

Nurses have more to lose than doctors, the head of the Health Policy Institute (HPI) think-tank Tomáš Szalay said, as quoted by TASR. He opined that the crisis will not shake society in the same way as the doctors’ protests did back in 2011. However, he added that he cannot estimate how many nurses would file their resignations although he foresees the number as “a fraction of those handed in by doctors”, and the protest as not amounting to a nation-wide across-the-table action. Szalay sees nurses as more vulnerable than doctors and having more to lose, as they are often the bread-winners in their families and are less mobile and flexible than doctors, while also less willing to work abroad. They have less savings, too, according to Szalay, and thus they cannot afford to stay jobless for longer. His expectation is that several nurses will withdraw their resignations. The analyst also warned that hospitals may not accept all of them back, and that this may be a convenient way of getting rid of unwanted employees. Moreover, the public will, in general, not quite understand the basis of the nurses’ protest, or what they are striving for. However, he deemed the new law to be bad, specifically the central regulation of salaries.