Faculties have ever fewer students and postgrads

THE NUMBER of students, including postgraduate ones, at Slovak universities and colleges has been declining, according to a study of the Academic Ranking and Rating Agency, ARRA. 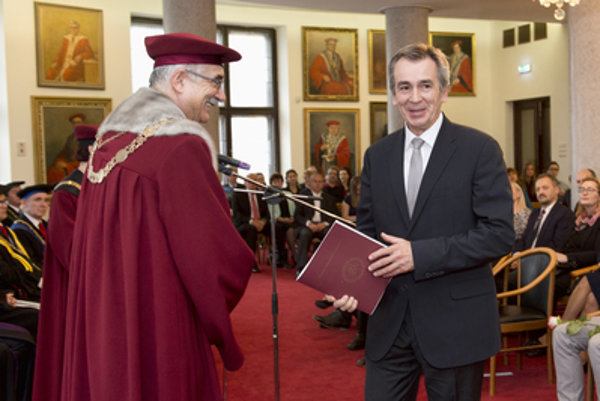 For the 11th consecutive time, ARRA has evaluated the quality of tuition, scientific activities, and also the interest of students in studying at Slovak universities and colleges. “While in 2008, Slovak third-level schools were attended by 215,000 students, the number was almost 5,000 lower in 2014, ARRA analyst Miroslav Medveď told the TASR newswire. He added, however, that the main reason is the demographic factor.

“The number of young people aged 19 – who are the primary applicants for study – has been falling steadily,” the analyst explained. The smallest decline in interest has been recorded in medical, agricultural and artistic studies – less than seven percent. At the opposite end are the humanities, natural sciences and law faculties where the slump in interest year-on-year has been ten to twenty percent, according to Medveď.

Interestingly enough, the number of foreign students has increased – tripled in the last ten years – and they currently represent about five percent of the total number of students. However, the number of Slovaks studying in the neighbouring Czech Republic has increased, too – to the current figure of 23,000.

The ARRA study points to the fact that the number of postgraduate students has also been declining steadily. “The overall number of postgraduate students has fallen by about one quarter since 2011; in absolute numbers, this means that we have 3,000 postgrads fewer which is less than in 2003,” Medveď stated on November 25. He attributes the decline to the change in the financing of this course of study, but he also points out that the number of such students at those faculties which are marked by active research and scientific works has started to decline – which could seriously impact Slovak research and development potential in the future, according to the analyst.

In the study, 112 faculties have been evaluated: 104 public ones and eight private ones – in 11 groups of study branches and 20 indicators, Ivan Ostrovský of ARRA said for the SITA newswire. This school year, only 83 percent of the planned number of accepted applicants actually applied, and therefore the universities, with just a few exceptions, resigned from the idea of selecting their students. The original 72-percent success rate increased to 87-percent, and truly competitive selection remains at only a few faculties.