SCULPTORS who work on the Tatra Ice Cathedral at Hrebienok in the High Tatras will finish by the end of this week. For about two weeks, they have been working on the biggest local attraction of the winter season, the TASR newswire wrote. 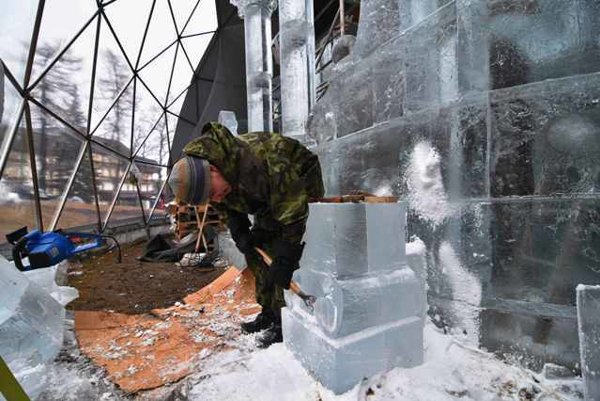 This year, the main architect is Slovak Adam Bakoš from Spišská Nová Ves who designed it in the baroque style, making it completely different from previous years.

Last year, the main altar was 6.5 metres tall, he said, but this was true only for the towers. In 2015, the whole construction is be 6.5 metres tall, with baroque sculptures: in the middle, a patron of forests is to stand holding an eagle, while on the sides are sculptures to remind one of a promenade, and angels are on top of the upper portal, which is typical for baroque. If there is some ice left afterwards, we would like to put small angels also on the side walls of the cathedral, Bakoš said for TASR.

Seven carvers are working on the construction: two from the Czech Republic, one from Poland and four from Slovakia. Everyday, six more men help them, especially with handling numerous ice cubes, each of which weighs about 110 kilograms. 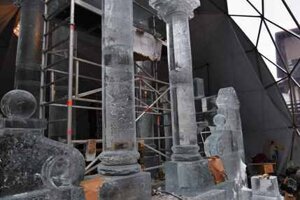 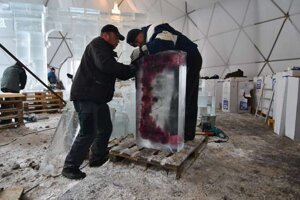 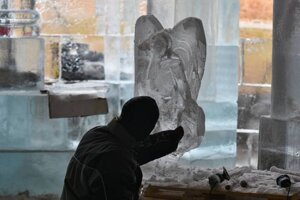 The inside of the dome that protects the ice works from the weather is cooled, thanks to which carvers were able to work even in relatively warm weather, when temperatures rose to 15°C. All details had to be done precisely, even though the art material sometimes did not freeze well. Things go better when the weather is cooler, Bakoš opined – the individual parts will connect better when frozen.

The main sculptor added that the construction of the main portal was one of the hardest parts, as it is placed on columns 6.5 metres tall. His inspiration was several baroque buildings worldwide, he said. Bakoš hopes that the whole construction will last at least until April.