RegioJet to retreat from prime route 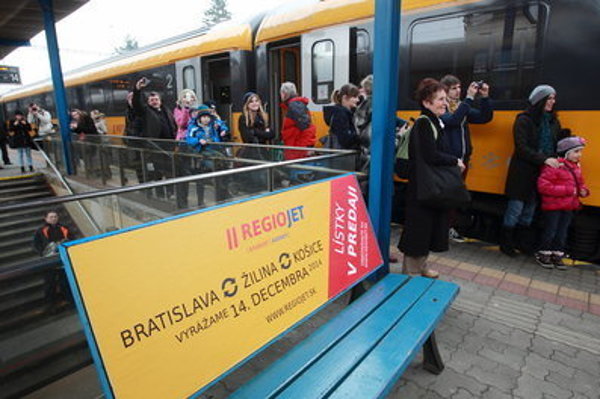 The latter rejected RegioJet’s claims, arguing that it is not attempting to push RegioJet out of the market and countering that it is RegioJet that has sparked a price war.

“I decided that we’re leaving for sure,” Radim Jančura, CEO of RegioJet, announced on November 23. “Transport [Construction and Regional Development] Minister Ján Počiatek has not done anything about below-cost fares on the loss-making InterCity (IC) trains of ZSSK, through which it is purposefully trying to eject us from the market.”

In Slovakia most rail passenger transport is subsidised by the state, which contributes to the so-called transport in the public interest scheme.

ZSSK operates under this regime for most of its routes while RegioJet draws subsidies for just its Bratislava-Dunajská Streda route. Apart from this they both run commercial, IC, trains. On the Bratislava-Košice prime line, ZSSK competes with its IC trains with RegioJet. The latter launched its trains on this route last December with a price of €9, far below the price offered by ZSSK. In response ZSSK reduced its fares.

Now Jančura accuses ZSSK of cross-financing IC trains with money intended for subsidised connections and of abusing its dominant position in passenger rail transport, arguing that it operates IC trains at below cost. In October Jančura asked Počiatek, whose ministry also controls ZSSK, to solve the situation around ZSSK’s IC trains, proposing its cancellation and threatening that if not, it would leave. As the ministry has not responded to its call, RegioJet decided to cease operating this line.

It originally wanted to halt operation of its trains as of mid December when the national train schedule will change, but now it wants, in order not to complicate Christmas holiday plans of its passengers, to halt the transport sometime during the first quarter of 2016.

“We will have to set a deadline by which we would leave in a way that would be fair to passengers and employees,” said Jančura, as cited by the TASR newswire, promising that it will not be before the end of this year.

As of December 13 it will only cancel the current overnight train and keep three trains per day, while it will not introduce additional previously announced daytime trains. It plans to employ two-thirds of some 120 people working on the Bratislava-Košice line on the Prague-Košice route, a connection that the firm plans to strengthen.

“The fact that Mr Jančura has announced his intention already some time ago at a conference of the Freedom and Solidarity (SaS) political party and that he has chosen the Transport Ministry as the cause of its failure, clearly proves that this is a politically motivated decision,” said ministry spokesman Martin Kóňa.

Some market watchers also point out that the RegioJet departure from the line is planned to take place close to the parliamentary elections scheduled for March 5 and that this way the company may create pressure on Prime Minister Robert Fico’s government to take action in order not to make its voters angry.

RegioJet’s announcement comes amid a competition for operation of the subsidised Bratislava-Banská Bystrica route for the next 10 years. Envelopes with offers will be opened at the beginning of 2016.

RegioJet started the Bratislava-Košice line with a fare of €9, when at the time ZSSK offered the cheapest tickets for ICs at about €20, but later RegioJet increased the fare on the most popular times. Now it claims that the line is loss-making.

“We will lose about €4 million on this route this year,” said Jančura, as cited by TASR, adding that thus it does not make sense to operate this route any longer as the state can subsidise ZSSK in the long term.

Jančura believes that ZSSK’s IC trains on the Bratislava-Košice line are loss-making, arguing that they were loss making already when RegioJet entered this route and since this time ZSSK has reduced fares.

ZSSK has rejected RegioJet’s claims, claiming that its ICs are not cross-financed with state subsidies and that the trains contracted by the state are financed separately.

Desana Mertinková, editor-in-chief of the Železničná Revue magazine about rail transport, sees free trains for children, students and seniors as the biggest obstacle to non-discriminatory competition on Slovak railways. RegioJet’s trains between Bratislava and Košice are full, but the carrier originally counted on a higher number of carriages and passengers and thus also higher sales. But it cannot reach this because almost half of the nation is entitled to free rail transport, Mertinková said, as cited by SITA.

The Fico cabinet introduced the free rail transport for selected groups of citizens on subsidised trains last November as one of measures from the so-called social security package. This means that children, students and pensioners cannot travel free on ZSSK’s ICs as well as RegioJet’s trains on the Bratislava-Košice route, but they can take ZSSK’s express trains on this route.

RegioJet already filed a complaint in 2014 with the Slovak Anti-Monopoly Office (PMÚ), but it has not decided on the matter yet. As the private carrier expects that the proceeding will take months or even years, it will file a damages claim caused by abuse of the dominant position by predatory pricing with the aim of pushed them out of the market. The damages should be set by an expert opinion, but RegioJet estimates them at some tens of millions of euros.

It will be passengers who will lose on the departure of RegioJet the most, while increases in prices and decreases or stagnation in quality of transport might be the consequence.

“Certainly it will be a pity for travellers when there is no competition on this route,” Rastislav Cenký, the director of the Institute for Transport and Economy, as cited by SITA. “It is good when passengers have an alternative selection and RegioJet has shown since its arrival that services in rail transport can be done in a different way. It has forced ZSSK to behave more forward towards clients and increase the quality of travelling.”