AN EXTRAORDINARY government session on November 27 has approved a package of anti-terrorism legislation as a response to the current security situation in Europe. 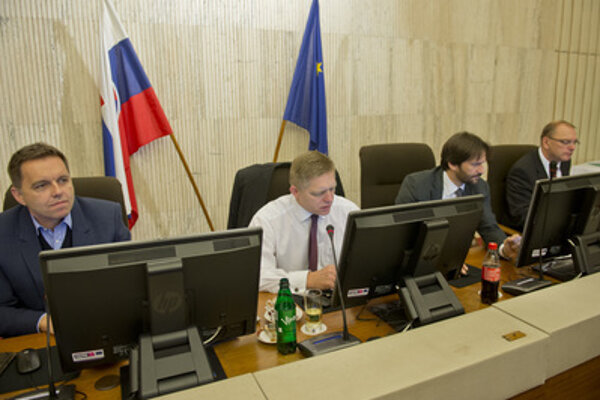 The package contains over 15 amendments, described as essential for a more effective fight against terrorist threats and will be debated via a fast-track procedure. MPs had two days to draw up the specific wording of paragraphs to be approved by the cabinet. Parliament will debate the amendments this week.

The most fundamental changes have been made to the Constitution, the Criminal Code and 13 more laws. For example, the period of detention if a person is suspected of terrorism shall be extended ­– from five days to ten days – as well as the powers of the Specialised Criminal Court and the Special Prosecutor’s Office. They should be able to make decisions on remanding a person suspected of terrorism in custody without charge. Legislative changes should also concern the police, army and intelligence services. Police officers should have more power to detain suspected persons and search vehicles. The Slovak Armed Forces should be able to take part in missions related to fighting terrorism. The Slovak Intelligence Service and Military Intelligence should both have their powers extended as well, the TASR newswire wrote.

Jail sentences for those convicted of conspiracy to commit a terrorist act are to be extended, as well. On the whole, however, the Justice Ministry has said that prison terms vis-a-vis terrorism are otherwise adequate in Slovakia, as they are among the most stringent in the EU – either between 20-25 years or up to life for some crimes.

Courts will be able to remand into custody a person who is charged with a crime related to terrorism without stipulating a reason for doing so, Fico said, adding that those suspected of terrorism may in justified cases be placed in custody for as many as five years. The police will have the authority to detain a person suspected of being in any way affiliated with plans to commit a terrorist act for up to 48 hours.

The proposed measures also give more powers to the intelligence services which will be able to trade with weapons, drugs or chemicals, and change documents in companies, the Sme daily wrote. The Slovak Information Service (SIS) will be also able to take down websites supporting terrorists or extremists, but only with the court's approval.

In view of the new anti-terrorism package of measures, the Interior Ministry will ask for an increased number of officers in the riot police as well as in the Special Designation Unit (UOU) - Lynx Comande, head of the ministry’s press department Ivan Netík told TASR. Following the terrorist attacks in Paris on November 13, special security measures have been in place in Slovakia. The number of police patrols has been increased from 450 to 1,200, with around 2,400 police officers involved. The increases [in the number of riot police and UOU officers] should take place within two years, Netík added.

“Migration is linked with terrorism,” Fico said in the media, explaining the package of measures. “As a result, we need to presume that the risk of attacks is ever higher. It’s incumbent on us to respond to the threats and to the EU’s failure by taking our own action. We are making sovereign decisions. That’s not just us though, nearly every country is adopting stringent measures.”

Europe is, admittedly, in a serious situation; the government’s legislation, however, creates a clash between human rights and security, according to Christian Democratic Movement (KDH) MP Pavol Hrušovský. “My experience is that whenever security is in danger, restrictions on human rights and prioritising security is called for. At any rate, I’d rather this dramatic situation not be misused towards political marketing. We shouldn’t use the migration crisis to cover up problems in Slovakia, such as corruption and cronyism,” he said. Hrušovský pointed to the risks that the package of laws entails, in that it boosts the scope of authority of law enforcement bodies. With that in mind he suggested that some oversight mechanisms also need to be introduced, such as the setting up of an independent commission.

Fico said he was not worried about the risk of the legislation of being misused. “Should we treat a bicycle thief in the same way as we treat a terrorist who’ll plant a bomb on a bus and kill 50 people? ... A different regime should be in place for such people,” said the premier.

The two MPs currently members of the extra-parliamentary Sieť (Network) party will endorse the anti-terrorist measures in that they provide effective internal and external security but it will not endorse it insofar as it serves to build a police state, Sieť chairman Radoslav Procházka said on TA3 TV news channel’s Sunday discussion show In Politics. He said he is displeased, for example, at the proposal whereby websites could be shut down on suspicion of political extremism.

Head of extra-parliamentary Slovak National Party (SNS) [which was Fico’s ruling Smer party’s coalition partner during the first term] chairman Andrej Danko said that security measures are indeed justified. “... The uncoordinated inflow of migrants is Europe’s most serious problem. Security measures are justified, but they need to be done with reason,” said Danko.

To achieve the constitutional changes concerning the anti-terrorist measures, the cabinet will need the votes of the opposition in parliament, according to TASR.