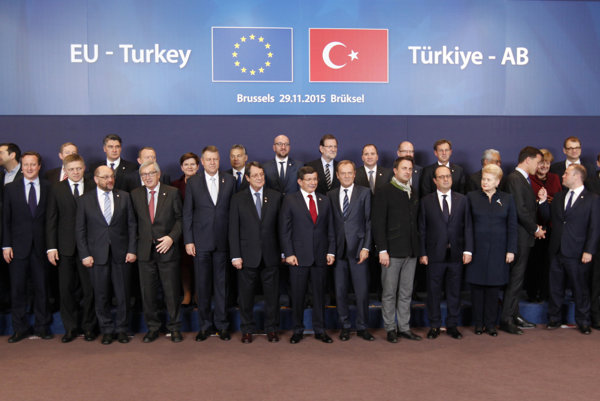 He hopes the time is coming when Greece will be expelled from the Schengen area, as it has no business being there, he also said, as quoted by the TASR newswire. When asked as to whether this is being discussed at the EU level, the PM said that, unofficially, everybody is convinced about it. “We just cannot put up with a member country that has openly given up on safeguarding the Schengen area borders. Schengen is of no use then,” he said. At any rate, the summit on Sunday is not the best place to address the issue, he added.

“The Prime Minister of Slovakia, possibly because he comes from a country that has neither sea nor islands, cannot correctly evaluate all of the parameters and peculiarities of guarding maritime borders, all the more so when these borders are being flooded with thousands of needy people who are escaping the hell of war,” responded Greece’s Foreign Ministry spokesperson Konstantinos Koutras.

The ministry also extended an open invitation to Fico, “before he renews his search for a scapegoat, to visit one of the Aegean islands to examine the situation on the ground, be briefed by the competent authorities, and form a personal opinion on this issue”.

Speaking at a session of the Slovak parliament’s European affairs committee, Fico said that Ankara has approached this situation as a major opportunity, expecting funding and visa concessions from the EU. “A reasonable visa liberalisation process can be endorsed, but not before Turkey meets the requirements, such as implementing an action plan to contain migrants in its territory and fully carrying out the readmission agreement,” the premier added.

The European Commission has also proposed a special fund for Turkey worth €3 billion that deals with assistance for Syrian refugees. Slovakia’s share of this fund is €13 million – on top of the €21 million that the Slovak Government has earmarked towards addressing the migration crisis.

With respect to Turkey’s EU accession process, the Slovak premier said that while it may benefit from some extra “dynamics”, he does not expect it to advance considerably.

It is important that European leaders come to understand that some issues, e.g. events in Iran and Syria, simply cannot be resolved without Russia’s involvement. “Russia plays a major role in military operations, and I’m hopeful that coordination of activities between Russia, France and the United States will bear fruit,” the Slovak Pm said. “I’d be unhappy to see the incident above disrupt the fragile consensus on the engagement of the top global players in coming to grips with the situation in Syria,” he concluded.