Christian families from Iraq are coming to Nitra Region

Twenty-five families of Assyrian Christians from Iraq are to be integrated into several villages of the Nitra Region during the following years. 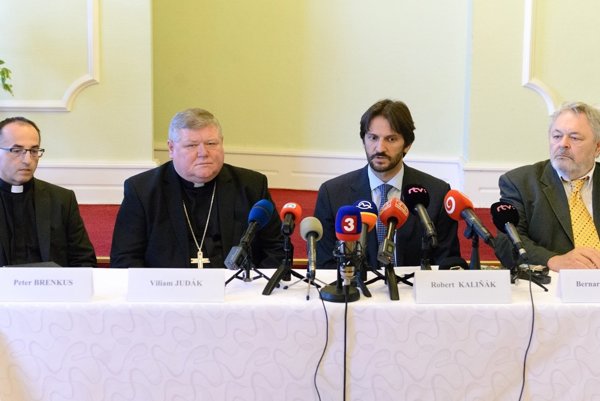 Slovak Interior Minister Robert Kaliňák specified that in total 149 people who do not represent any security risk for Slovakia should arrive. They are expected to arrive by a charter flight in following days, the TASR newswire reported.

“An exact date cannot be set due to various, subjective as well as objective, reasons,” said Kaliňák.

The integration process of the Assyrian families will start in an asylum camp in Humenné in eastern Slovakia, from where they will be gradually moved to final accommodation facilities in the Nitra diocese.

“The ability to integrate varies from person to person,” said Kaliňák, adding that the integration process would last eight months to two years while this time is needed in order these people are able to integrate as full-fledged members into society.

Apart from security checks, the migrants will undergo health checks and educational and acclimatisation phases.

The integration of the families will be financed from the state budget and sponsor gifts.

Apart from the Nitra diocese, the civic association Pokoj a Dobro will also provide assistance to them.

It was volunteers who offered space for further accommodation of families while part of the facility is in the church’s ownership.

“We want to ensure that they do not lose their Christian identity and are able to find their new home in Slovakia,” said Viliam Judák, the Nitra bishop, adding that in their case it is absurd to speak about a security risk. “It is they who are endangered.”

The families come from a community speaking the Aramaic language, i.e. the original language of Jesus Christ. They were chosen, as Kaliňák specified for the SITA newswire, from more than 1,000 families interested in integration.

“There are among them artists, doctors, programmers; all professions that have use in Slovakia,” said Kaliňák.

Peter Brenkus from the civic association specified that children up to 15 years make up about one third of the Assyrian refugees. About 30 people are in the age up to 25 years and eight people are more than 60 years old. The rest are people in middle age.

Brenkus specified that the project of the integration of the families into local communities will last three years during which many volunteers will help and 12 jobs will also be created. During these three years the migrants will get assistance in the form of language education, social assistance, and labour and social consultancy. They expect that many families will be integrated earlier and will only need assistance for a shorter period of time. After the project is over, they might stay in most facilities, if interested, but they will be able to obtain their own housing too.

The concentration of people to be integrated will be not high so that they will be pushed to interact with locals. Simultaneously, the families will not be far from each other in order to keep contact.

Kaliňák did not specify in which villages the Assyrian families will be accommodated.

But mayors of villages in which the migrants should be placed criticise the process of placing migrants into villages, saying that it has been decided without their knowledge.

They talk about launching petitions or initiating the local referenda. The mayors of several villages told the Sme daily that they will convene the special sessions of the local councils to discuss the situation.

The Interior Ministry however considers such response to be useless panic.