THREE major opposition parties, Most-Híd, the Christian Democratic Movement (KDH) and Sieť, failed to reach an agreement on cooperation ahead of the March 2016 general election. 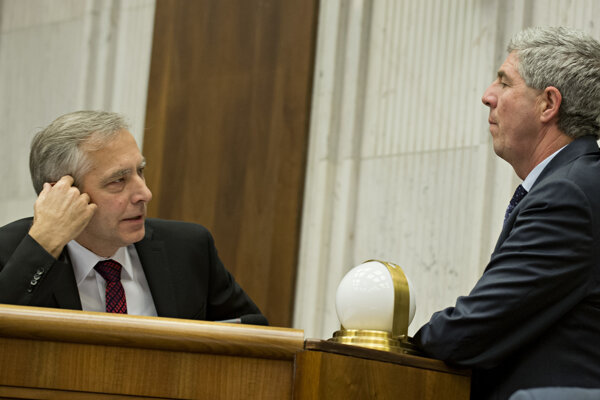 They will mobilise their voters separately, the TASR newswire reported.

Most-Híd Chair Béla Bugár and KDH head Ján Figeľ admitted that they had expected more from the talks.

“We’re concerned with seeing cooperation of the three parties that could provide a basis for a future stable government and would also motivate voters to go to the polls... Our alternative hasn’t gone through due to [Sieť leader Radoslav] Procházka, who has his own vision,” said Bugár, as quoted by TASR.

Figeľ was unwilling to disclose the stumbling block of the talks.

“I had expected more from the meeting, but this hasn’t changed anything on the determination of KDH and its affiliated parties to achieve political change in Slovakia,” Figeľ said, as quoted by TASR. “We’re preordained for such cooperation.”

He added that there are no plans for further similar meetings any time soon.

Meanwhile, Procházka described the meeting as meaningful and constructive.

“The goal wasn’t to reach an agreement, but talk about our attitudes tête-à-tête... Our goal is to have a united command [for the right wing], with a united programme and clear drive,” said Procházka, as quoted by TASR.

According to political analyst Ján Baránek, there should be an opposition three-party coalition with 150 candidates on the slate as an alternative to Smer. There is, however, the question of who would lead such coalition.

“It is hard to imagine that Ján Figeľ would agree to Radoslav Procházka as a leader, which is indicated by preferences,” Baránek told the public-service broadcaster RTVS.

The latest MVK poll indicates that Sieť, KDH and Most-Híd would get only 64 seats in the parliament. If they wanted to form a government, they would have to invite another party to a coalition, RTVS reported.