Nurses to resign amid battle for more pay

NURSES have been fighting for higher salaries for several years, but unlike doctors they have yet to see their demands to be met. 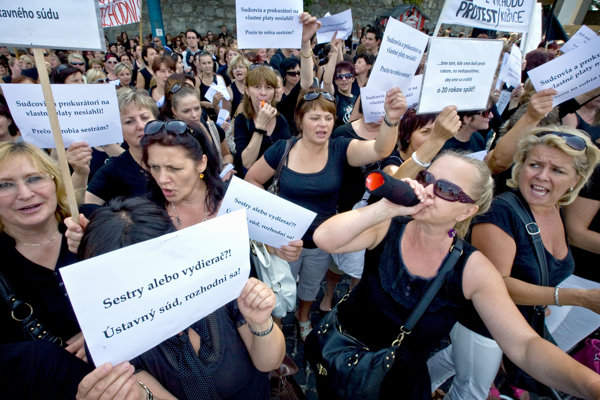 Nurses recently change tactics as they seek increased pay and instead of protesting in front of the parliament or raising tents in front of the Government’s Office, they have begun handing in their notices. Analysts remain sceptical about the success of the action.

Nearly 1,000 nurses handed in their notices before December 1, and the nurses’ representatives expect more to come. They are dissatisfied with how the Health Ministry has dealt with their demands regarding pay and working conditions. According to them, the ministry did not include their demands into the law on salary conditions of health-care employees adopted by the parliament in late November. Moreover, the new law may only worsen their situation, the nurses’ trade unions said.

Health Minister Viliam Čislák however rejects such claims and says that the salaries will actually increase. The effect of the new law will be seen only next February, when they will receive their January pay.

“If any of the health-care employee shows me that his or her salary is lower than now, I will resign as the health minister,” Čislák told the public-service broadcaster RTVS.

Also the heads of hospitals associated in the Association of State-Run Hospitals promised that the salaries of health-care employees will not fall.

Nurse and Midwives Labour Union head Monika Kavecká however does not understand such guarantees, saying that the nurses are fighting for the salary hike, as reported by the TASR newswire. 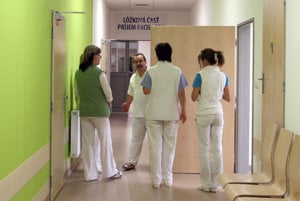 Though changes will increase the salaries of more 20 occupations working at hospitals, nurses that work in  doctor’s surgeries, spas and social service facilities are excluded. Nurses also demand that factors such as the number of years one has worked in the sector be included in the calculation of one’s pay, and to raise their basic salary every three years of practice, according to the Slovak Chamber of Nurses and Midwives (SKSaPA) statement.

To meet these demands, the Health Ministry would have to allocate about €200 million a year. The ministry however allocated only €55 million for this purpose, the Sme daily wrote.

“I would understand the nurses’ demands if they wanted fairer conditions for rewarding their job, but the demands of the trade unions would only deepen the unfair and ineffective remuneration as well as the operation of hospitals,” Dušan Zachar, analyst with the Institute for Economic and Social Reforms (INEKO) think tank, told The Slovak Spectator.

The salary conditions should be discussed directly with the hospitals’ management. It should be based on the results and quality of the work done, and not the number of years which may discriminate against younger health-care employees, Zachar added.

Čislák considers the whole protest to be politically motivated as Kavecká said she is considering running for a parliamentary seat come the general election in March 2016. Kavecká has confirmed these ambitions, but stressed that her decision only follows “the years-long ignoring of our demands”, as reported by TASR.

Kavecká then said on December 3 she will not run to stop suspicions of political motivation of the protests.

The protests of nurses have been supported by several associations, including the Medical Trade Unions Association (LOZ) which reminded that also doctors saw their salary demands to be met only after they started handing in notices in 2011.

“LOZ understands that nurses were driven into a corner and do not have other possibilities than mass notices,” LOZ head Peter Visolajský said, adding that this is the fight for not only better salary conditions of nurses, but also better quality of health care.

The analysts however do not think that the protest of nurses will have as big effect as the protest of doctors back in December 2011 when one third of them submitted their notices. The protest resulted in declaring the state of emergency and military doctors, also from the Czech Republic, were called to help in affected hospitals, Sme reported.

Of about 19,000 nurses working in the health sector, only one-fifth have already submitted their notices, according to Sme.

“It is hard to say how this coercion of nurses will turn out,” Zachar said.

He considers the current situation of nurses less favourable than the doctors had in 2011 since there is a one-party government. Moreover, the parliament has recently adopted new law on minimum wages of health-care workers which will increase the salaries in smaller hospitals. Nurses also have weaker political lobbying and risk more with their notices than doctors, Zachar added.

“On the other hand, the approaching elections, absent leadership in health care and considerable populism of the ruling government increase the relative negotiating power of the protesters,” Zachar continued. “Thus certain concessions of the government or state hospitals’ management cannot be ruled out.”

Visolajský of LOZ added that the success of the whole protest will depend on the number of notices and also on the wards nurses work at, Sme wrote.

Following the 2011 protests, the Iveta Radičová government (2010-2012) adopted the new law, based on which the salaries of nurses increased to some €1,000 gross per month. The law was, however, stopped by the Constitutional Court in 2013. As a result, the salaries were not increased in regional, non-profit and private hospitals where nurses still earn €500-€600 gross. The law adopted by the parliament in late-November should increase the salaries in these facilities by €200, which is the reason why nurses working there do not submit notices, Sme wrote.

The only exception is the hospital in Bojnice.

This means that mostly nurses in university and faculty hospitals, which will see only minimum hike in their salaries, handed in their notices. Those who did so by the end of November will officially terminate their employment next February.

Čislák meanwhile admitted that nurses from key wards, including surgery, anaesthesiology and intensive care, want to resign. He however claims that every hospital where nurses have submitted their notices will be able to operate at least in an emergency regimen. The ministry and the affected hospitals need more time to draw up detailed measures to tackle the situation, but patients will not be at risk, he told the press on December 1.

SKSaPA head Iveta Lazorová however says that the situation is bad in hospitals and if one or two nurses were missing, it would be a problem to set a working schedule, as reported by Sme.

Čislák has meanwhile pointed to the fact that many nurses have signed the so-called ‘contract of solidarity’, which obliges those withdrawing their resignations to pay €3,300 to the nurses’ trade unions within a week.

Doctor and lawyer Peter Kováč described the sanction as problematic in terms of enforcement.

“The amount has obviously been set by the trade unions to be liquidating for individual nurses,” Kováč said, as quoted by TASR. “So, there’s a risk that the commitment can be considered as usury, and thereby it would be null and void.”

Kavecká however defends the sanction.

“It is a standard European method to give any minimum guarantees to those who do not betray [the trust],” Kavecká told TASR, adding that nurses were not forced to sign the agreement.

She also denied the claim of nurses withdrawing their notices. Conversely, she expects the number of notices to increase in following days. She went on to say that the hospitals’ managements are trying to persuade nurses not to leave their job, as reported by TASR.