Individual transport by passenger cars remains a challenge in Slovakia. 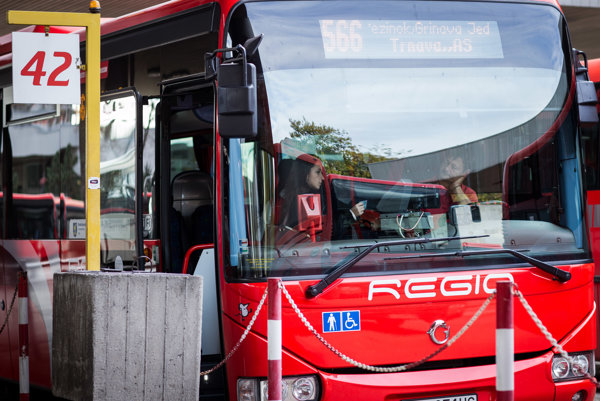 Free trains for almost one half of Slovakia’s population introduced last November have reduced numbers of passengers on long and short-haul bus transport with a bigger impacts on the former. However, the disproportionate number of people using their own cars remains a bigger problem, experts say.

“The development in the number of transported persons and impacts of the introduction of free trains have confirmed that bus transport is irreplaceable for people in regions and this is especially of its availability,” Peter Pobeha, president of the Bus Transport Association (ZAD) said on December 2.

Prime Minister Robert Fico's government introduced free trains for children, students and pensioners in November 2014 as one of measures of its so-called social measures. ZAD has calculated that due to this the number of passengers in unsubsidised long-distance bus transport decreased by almost 1 million or 13 percent year on year. In the regional bus transport subsidised by regional governments the number of passengers decreased by 6.5 million or 2.4 percent. This means that the annual decline in the regional public transport was comparable with years before the introduction of free trains while ZAD sees the higher usage of passenger cars and demographic development behind this decrease. In case of long-distance transport the decline is more significant.

Original estimates of bus companies after the introduction of free trains spoke about a decline of as much as 8 percent of the number of passengers in regional bus transport.

Pobeha specified that bus transporters have cancelled or reduced frequency of some bus lines in long-distance transport due to the decline in the number of passengers. But regional transport has not been reduced.

“Regional governments have realised that public transport must function as one whole,” Marek Modranský, ZAD secretary said as cited by the SITA newswire. “Bus transport has an irreplaceable function in regions.”

Based on a ZAD survey on 12,000 respondents, 87 percent use only bus transport and the remaining 13 percent trains.

“The price advantage [of free trains] makes sense only on longer distances, because people commonly commute to work or school on the distance of 25-30 kilometres,” said Modranský. “To change transportation means on such a short distance even with combination of travelling free [by train] on any part of the journey is time-consuming and inconvenient.”

This is also the reason, according to Modranský, why the drop in the number of passengers in regional transport was negligible.

“When it comes to accessibility, bus transport is ahead, as there are regular bus lines in almost every village in Slovakia,” said Modranský. “With a total of 2,927 villages in the country, 2,905 villages are being served by bus transport.”

Bus transporters do not expect any other outflow of passengers from buses to trains.

“Those, who wanted to go into trains have already left,” said Pobeha, as cited by the Pravda daily.

The passenger rail company ZSSK reports an about 20 percent increase in the number of passengers over the year since the launch of free trains.

The share of people travelling by public transport has been decreasing in Slovakia when the current share accounts for 30 percent compared to 70 percent using passenger cars. Ten years ago this ratio was 66 percent to 34 percent and 20 years ago it was 50 percent to 50 percent, according to ZAP.

Modranský compared the travelling habits of Slovaks with statistics of more developed countries, in which only 34 percent of people use passenger cars. More than 30 percent use public transport while 24 percent travel by bicycle. Between 12-13 percent of people walk to their destinations.

ZAP estimates that bus companies transport annually in Slovakia more than 230 million passengers with 4,300 buses on short-distance routes. This makes up 87 percent of all passengers in public transport.

In the future transporters see the space for an increase of passengers in public transport in cooperation with self-governing regions, municipalities as well as the state. They believe that restrictions in city parking, bus traffic lines or preferring public transport on cross-roads may help return people into buses.