HALIČ Castle looked this elegant more than hundred years ago, when its noble lords took care of of the castle and surroundings. In the front, we can see a well tended park that seems to have been planted only a short time ago. 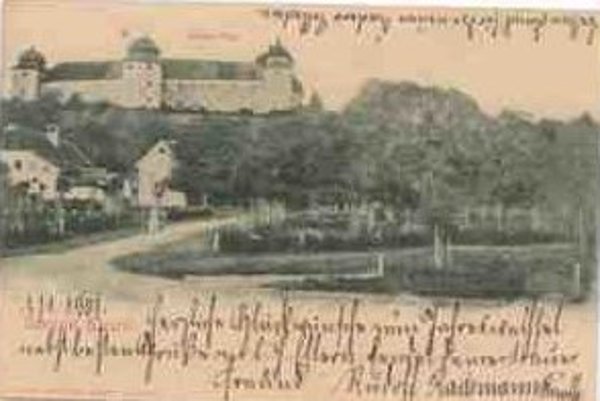 It is interesting that this postcard, which traveled from the Novohrad administrative region to the Moravian area, has the date January 1, 1901 on its side, i.e. the first day of the 20th century. Even more interesting is that it arrived to the addressee – as the post stamp proves – already on December 21, 1900. This probably means that the author did not want to miss the significant date and wrote it two or three days earlier; or perhaps some kind of weird time shift happened at the cusp between centuries.

The noble family Forgács, among the former Hungarian nobles who owned Halič Castle, has a nice coat of arms: a virgin with a golden crown on her head, half-moons and a star.

Blažej Forgács received the coat of arms in 1383 for his loyalty – he is symbolised by the half-moon, while the virgin represents Queen Maria of the Anjou family.

When Maria’s father, Louis I of Hungary (of the Anjou family), died in 1382, her mother Elizabeth Kotromanič of Bosnia took over the rule in the name of underage Maria. However, it was not acceptable to the Croatian nobility to have a woman on the throne, and so the Zagreb bishop addressed the relatives of the Anjou family, specifically Charles III of Naples (called Short), who gladly arrived and promised many privileges to the local nobles. He immediately became king de facto: he was soon crowned in Székesfehérvár, despite having promised Louis I not to contest the hereditary rights of his daughters.

However, Elizabeth did not give up and invited Charles to the castle in Buda where her loyal Blažej Forgács of Kozmálovce attacked and gravely injured him. Charles was wounded, while his entourage was driven out of the country. Thus, Elizabeth was celebrated anew in Buda as queen.

But the series of atrocities had only started. Elizabeth let Charles be poisoned (or strangled) a few days later. Six months after that, followers of the late Charles attacked the queens, travelling in the north of Croatia and protected by a relatively small retinue. Their protectors and friends, including Blažej Forgács, were killed and their heads sent to Charles’ widow in Naples as proof of revenge.

Both queens were imprisoned at the Bosijevo Castle and when Maria’s husband, Sigismund of Luxembourg, tried to free them, Maria witnessed Elizabeth being strangled. Sigismund failed to conquer the castle, and so Maria was prisoner for eight more months, until the Venice troupe released her. She never recovered from the suffering and died a mere four years later.

Ján Horváti, behind the murders of Forgács and Elizabeth, was later captured by Sigismund, tortured and hacked to pieces.

Such is the story behind the nice coat of arms of the Forgács.