THE ANNUAL congress of the ruling Smer party in Nitra on December 5, presided over by former parliamentary speaker Pavol Paška, among other points also presented the third package of social measures planned for the coming years, starting with 2017. 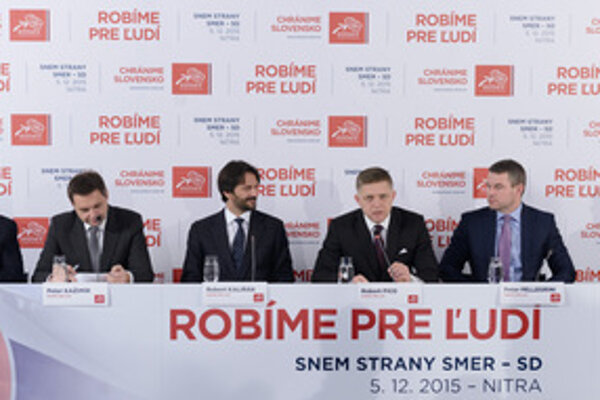 If Smer remains in power after the March 5 election, it will introduce a third social package that won't be worth €400 million as originally planned, but as much as €1 billion, Prime Minister Robert Fico announced. All necessary laws pertaining to the package will be approved in 2016, with individual measures to be introduced gradually as of 2017, said Fico.

The first measure will be creating 100,000 new jobs by 2020, while a particular focus will be put on creating jobs in agriculture and on employing those at a disadvantage. Another measure concerns reducing health-care deductions for people with low salaries. It should concern around 780,000 people and cost €90 million.

Smer also wants to create conditions for local authorities to construct 5,000 flats to rent that should serve as “starting flats for young people”. Meanwhile, teachers should receive flats for free. “We’re returning to a Slovak tradition,” Fico said, as quoted by the TASR newswire. “The state will construct around 2,000 new flats for rent for beginning teachers on the lowest salary degree. They'll only pay the overhead costs.” If Smer is in government, €50 million will be spent on reconstruction of dormitories for 10,000 students, while €50 million will be spent each year on doubling Christmas bonuses for the elderly. Those caring for disabled children and the elderly should see an income improvement of €1,000 per year.

After Smer in late 2014 introduced free rail transport for students and pensioners, it wants to make bus connections to train stations for free as well. “It will cost €30 million, but it won’t be introduced before a coordinated schedule is put in order – concerning the duplicity of trains and buses,” said the premier.

The final measure should concern bolstering security measures worth €100 million.

The third package will not affect the government’s efforts to reduce the public debt, while it should boost economic growth and employment, according to Fico. He was joined in this opinion by Finance Minister Peter Kažimír who said at the congress that Smer wants to fund its third social package worth €1 billion from better collection of taxes and the fight against tax evasion, while not hurting the state budget for 2016. The funding of the package is closely linked to the success of the very first measure - creation of 100,000 new jobs, the finance minister noted.

This is sheer populism, head of the INEKO economic think tank Peter Goliaš told the Sme daily. He considers the explanation of how to receive one billion euros extra very vague. “A better tax collection against what has been already planned in the budget is not sure,” he claims, adding that the government should rather focus on naming the measures thanks to which it will decrease the deficit in the future, instead of naming measures that will cause the deepening of the deficit.

As for the improved employment, especially of those for whom it is more difficult to be employed (like women after maternity leave, the physically disabled or long-time unemployed) head of the Employment Institute Michal Páleník sees it as unrealistic. If government really wanted to employ these groups, it would have to invest at least €10 billion, not just a few hundred million, he opined. “This is a group of people for whom systemic measures must be sought,” he explained for Sme.

Smer was founded by Fico in 1999 as a “third-way party”, with its constituting congress taking place on December 11, 1999 in Stupava near Bratislava.