THOSE who live without prejudices, regardless of ethnicity, religious faith or social status were awarded the Roma Spirit in 2015, for the seventh time already. 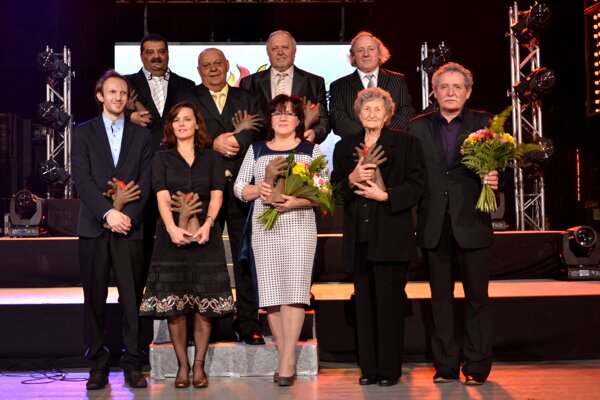 The Deed of the Year award went to Dušan and Štefan Klempárs from Markušovce, for saving the lives of two young men from a submerged car in the Hornád river, and to Ľuba Riapošová of the Association for Culture, Education and Communication, informed the SITA newswire.

The non-governmental organisation to receive the award is Equity civic association, for organising a summer camp for both Roma and non-Roma that contributes to mutual respect – “Black & White – Let Us Live Together!” Gypsy Television of Bratislava was awarded for news activities in the Media category. Mária Oláhová from Detva was awarded as the Personality for long-term work and contribution for the Roma community; while the Village and City category was won by the municipality of Vtáčkovce (in Košice-vicinity District) for projects improving the life of Roma community, and thus the life of whole village.

Winner of the Company, Firm and Employer category was the Elementary School in Muránska Dlhá Lúka in the Revúca District, for building and opening a school that changes the lives of both children and adults and contributes to mutual tolerance and eliminating of prejudices.

Winners were selected by two international juries, one for the Deed of the Year and one for other categories, which included positive role models of both Roma and non-Roma communities. The awards were handed out at a gala evening on November 15, in the Nová Scéna theatre in Bratislava; and the event was broadcast on November 21 on the public Slovak Radio and Television TV Channel RTVS 2. More detailed information can be found at the award’s website.

“The Roma Spirit spread its wings of humanity and solidarity and awarded those who, without prejudices, contributing to the world becoming a better place for all,” Riapošová noted.