ONE World, the festival of documentary movies focusing on social problems, human rights and related issues has finished in the Slovak capital and is now moving on to other regions. 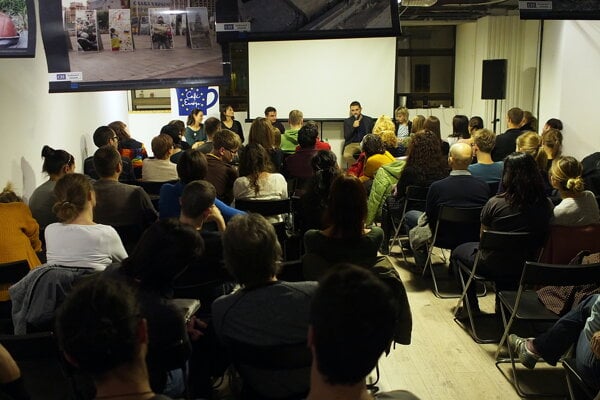 Cafe Europa debate on migrants was part of the One World festival (Source: jeden svet / One World)
Font size:A-|A+4

The one feature which sets the Bratislava edition of the festival apart is the organising of discussions – not only with moviemakers but also with analysts and people having practical experience with the topical themes.

Apart from the most pressing issues like war conflicts and the ensuing migration waves to Europe (or economic and political implications, like in the case of Russian-Ukrainian conflict), also other themes were opened, like natural disasters, environmental issues, climate change, or sustainable lifestyles. These latter ones were also reflected in the motto and the visual logo of this year’s edition – Let Us Have One! Meaning not just some drink, but rather pointing to the unequal distribution of water sources across the globe.

In 2013 the festival showed the Arab Spring and how it was developing among individual countries, but also touched on the movement that was still not perceived strongly in Europe – including Slovakia – the protests against a corrupt establishment in Ukraine. This year, alas, discussions still revolved mostly around these developments, alongside those on dietary habits, escaping the Holocaust, freedom of media in Slovakia, and some others.

The discussion on November 28, succeeding the sold-out film This is Exile – Diaries of Child Refugees, featured not just experts, but also people currently staying in Slovakia who have had practical experience of how it feels to be a refugee – including one who arrived to this country as minor.

The next day, the debate following a documentary presenting the work of Human Rights’ Watch fieldworkers, E-team, explored the course of conflict in Syria and explored the options among future developments. Unfortunately, none of the three participants: a Syrian researcher living in Budapest, Al Hakam Shaar, Oriental analyst Ján Lenčo and photographer/humanitarian worker and founder of  People in Peril, the civic association organising the film festival Andrej Bán, both Slovaks) – was too optimistic about possible solutions in the foreseeable future.

If there was any conclusion to be formed and drawn, then it was the unfortunate involvement of Russia in the Syrian conflict, the need for bigger involvement of the West in Syria, and the key necessity – to make the Islamic State, or Daesh, Enemy No 1. And, as Bán put it, “the need to sometimes make coalition worth a smaller bastard against the bigger bastard, and sometimes with the bigger bastard against the smaller bastard – whoever can be put in either of these positions”. They all agreed also on the biggest question that any military operation includes. What to do with Syrian president Basher al-Assad? 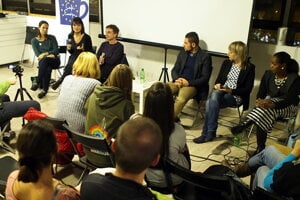 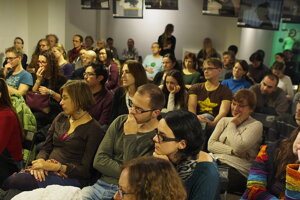 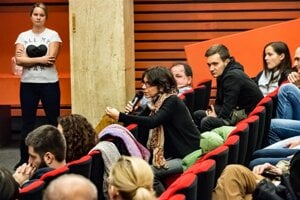 The Monday, November 30 discussion with the Russian (exiled in the Netherlands) director of Cargo 200 film Masha Novikova posed many questions as well, showing the Ukrainian conflict from the point of view of mothers and relatives of Russian young men who died in this conflict wearing their army’s uniforms, although officially they were there “on vacations”, fighting allegedly on their own. Cargo 200 is the symbol – since the Afghanistan war – for coffins bringing home the corpses of killed soldiers. “The conflict in Ukraine has no real reason, save for the pretence which has been used by someone to start it – by someone who benefits from it, and you can imagine yourself who that can be,” Novikova said at one point of the debate.

The films screened in Bratislava will now tour Slovakia and be shown in other cities and towns, from Malacky in western Slovakia, to Vranov nad Topľou in the very east. More information, also in English, can be found at www.jedensvet.sk.