ENVIRONMENT Minister Peter Žiga survived a no-confidence motion at an extraordinary session of the parliament on December 11. 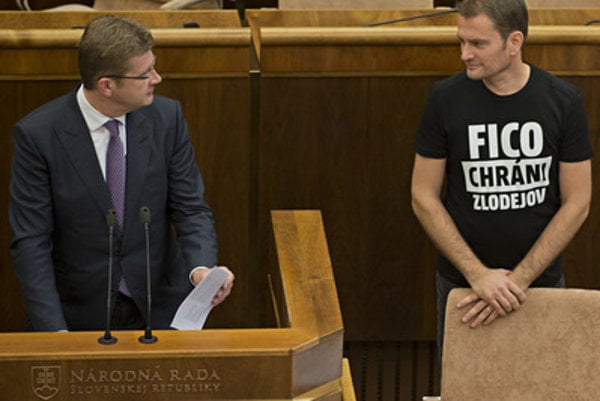 Only 37 out of 107 present lawmakers voted for his ouster over the ferry case on the Danube River. All Smer MPs present lent support to their party minister, with only opposition lawmakers voting for his dismissal.

The opposition claims that the tender was adjusted in favour of its eventual winner. It was, for example, necessary to deposit a guarantee of €1 million, even though the state-run National Highway Company (NDS) was demanding a guarantee of only €300,000 for the construction of a €900-million motorway tunnel.

Moreover, the tender winner is allegedly close to the ruling Smer party. A person who is a co-owner of the RHK REAL company along with Defence Minister Martin Glváč represented both stakeholders of Ponton City at the firm’s general meeting. Glváč has stated – as quoted by the TASR newswire –that he has not done business with anyone since 2006.

Žiga claimed that the state has not lost a single euro and no one has stolen anything. “The proposal to oust me and its justification only reflects on Igor Matovič [chairman of the Oridnary People and Independent Personalities, OĽaNO], who has business ties with financial group J&T. The motion contains lies, half-truths and fabrications,” he claimed. The minister rejected the notion that the public tender for operating the ferry was manipulated.

“The announcement was published in the bulletin on November 3, 2014, and a day later in the European bulletin,” he said. “That means four months before the beginning of the tender it was clear that a new ferry was to be procured. Four months is ample time to prepare for the tender. Furthermore, the tender documentation was published on February 20, 2015 and in the European bulletin on February 23, 2015.” Žiga also pointed to the fact that new legislation regulating public procurement processes has been in effect since January 2013 and that the million guarantee is used exactly to prevent various speculators from participating in tenders. Thus, he reacted to the opposition’s claims that even the requirement to pay a €1-million guarantee represents evidence of tender manipulation.

The environment minister also pointed out that he initiated a triple audit of the entire process. “There was a ministerial audit, then an inspection by the Public Procurements Office, and I also turned to the Supreme Audit Office. Both offices are headed by nominees of the current Opposition,” said Žiga, adding that the ministry audit found no deficiencies. The opposition responded to this statement with laughter and applause.

Police have launched an investigation into the €25 million contract for ferry transport across the Danube River, the Sme daily wrote on December 10. “The police are checking the approaches of Vodohospodárska výstavba and the Environment Ministry,” Police Presidium spokesperson Michal Slivka told Sme. “It is not possible to provide any further information in this stage of the investigation in order to avoid the destruction of evidence.”