The light from Bethlehem is in Slovakia

Slovak scouts will distribute the Peace Light from Bethlehem throughout Slovakia. 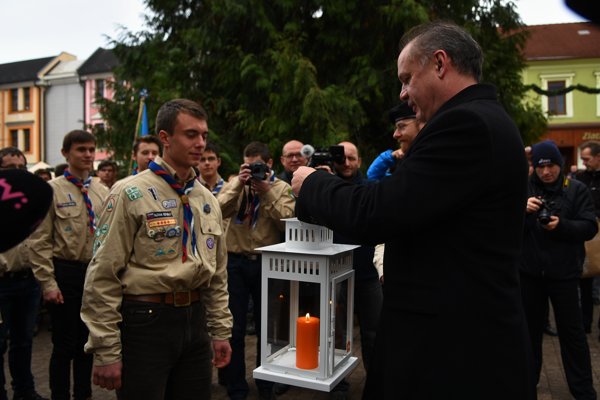 The scouts took over the Peace Light from Bethlehem from Austrian scouts during a ceremony in Vienna on December 12, Marián Suvák, the coordinator of the light from Bethlehem in Slovakia informed the SITA newswire. On Sunday, December 13 they passed it to Polish scouts in Zakopane and later that day to Slovak President Andrej Kiska. The short ceremony did not take place at the Presidential Palace in Bratislava as usual, but on the St Giles’ Square in Kiska’s hometown of Poprad (Prešov Region) instead.

“I’m happy that I’ve been able to receive this little light of peace from scouts in my native town,” said President Kiska as cited by the TASR newswire. “I’d be glad to see peace reaching all families in Slovakia through this light ... and it would be even more beautiful if peace reached the entire world, which is finding itself in such turmoil nowadays.”

If he were able to choose anyone in the world to present the Bethlehem light in person, Kiska said that it would be Pope Francis.

“He’s a man whose ideas, humility, charity and understanding are so needed in this hardened world ... These main messages of love and forgiving need to be observed throughout next year,” said Kiska.

Teams of Slovak scouts will travel by train across Slovakia on December 19 to distribute the light to 300 towns and villages as well as to distance places like Lomnický Štít, the second highest peak of the High Tatras, but also to hospitals, churches, hospices and other places to enhance to the Christmas atmosphere.

The modern history of the light from Bethlehem dates back to 1986 in Austria where it started as a part of a large charitable relief mission. That year a physically challenged child was sent to Bethlehem, the birthplace of Jesus, where they lit a candle from one of the oil lamps in the Church of the Nativity in Bethlehem, which have been burning continuously for over 1,000 years. After the child returned to Linz with the light, it was passed to other parts of Austria. After the fall of totalitarian regimes in 1989 this habit spread to Austria’s neighbouring countries including Slovakia, in which it is scouts who distribute the light further on to Poland as well as across Slovakia.

“The light bears a message of peace, love and unity and thus common universal values particular to people regardless of their belief or to which church they belong to or whether they are without any denomination,” said Suvák.