CONSTRUCTION of the new assembly hall at the Volkswagen Bratislava complex, where the Porsche Cayenne will be assembled, started on December 15. 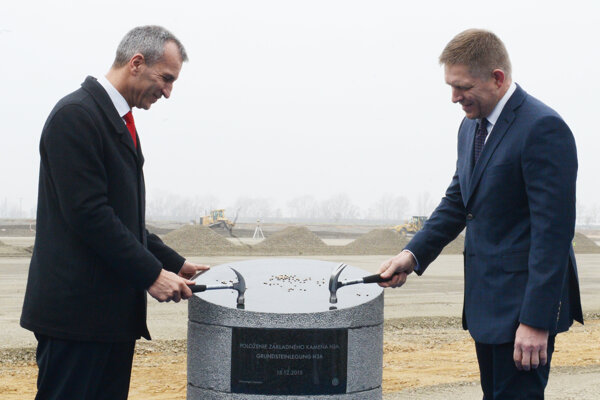 The carmaker will invest €300 million into constructing the plant and related infrastructure. After completion (scheduled for late 2017), 400 people will work there in one shift. The investment is already the third one to have been announced this year, after commencing construction of the Audi Q7 body shop and starting construction of the Porsche body shop.

“After commencing construction of the new Audi Q7 body shop and laying the foundation stone of the Porsche body shop, we present the third big investment this year,” said Albrecht Reimold, chair of the board of directors of Volkswagen Slovakia, as quoted in the press release. “This means for Slovakia, new jobs in the field of the most advanced technologies.”

Slovak PM Robert Fico called the investment another fuel to the good-running engine of the Slovak economy.

“The construction of the assembly plant for SUV vehicles isn’t the final project that Volkswagen wants to work on,” Fico said, as quoted by the TASR newswire. “Therefore, we expect that other carmakers in Slovakia will carry on down this road. We also expect big development of the sub-contractors network for the car industry.”

The size of the new assembly plant will be 90,000 square metres. It is located close to the already built assembly plant. During the construction, the plants will be connected via a bridge and a tunnel. There is also a plan to construct a new administration building, social spaces and a canteen for 250 people, as well as bus stop, car parking and new personnel gate.

Representatives of Bratislava Self-Governing Region also welcomed the commencement of the construction. The region would like to open a new dual academy, which would educate pupils to German standards and prepare them to meet the demands of such a big carmaker as Volkswagen is, said Governor Pavol Frešo.