Whereas the Slovak startup scene has been experiencing a boom and creating approximately 1,000 innovative companies each year, new investors and the government’s priorities in supporting young entrepreneurs’ activities have appeared. 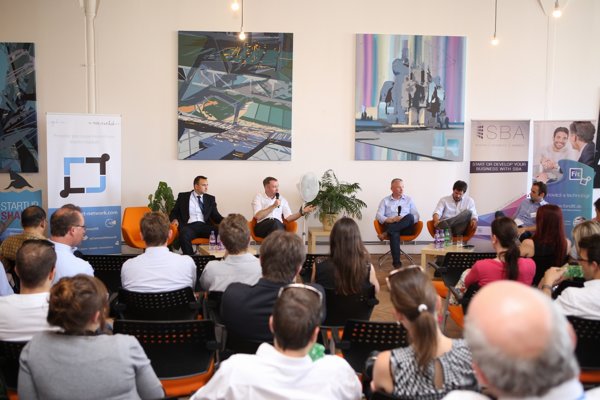 “Finally, the sector is operating with the right conditions for its development and also local media and the government have registered the trend of startups,” Ivan Štefunko, managing partner in venture and seed capital company Neulogy Ventures, told The Slovak Spectator.

“Moreover, universities do not impede the business activities of their students, support incubators arise and  accessible financing via venture capital has been allowed.”

The startup scene opened up more broadly about five to seven years ago with the introduction of well-established international initiatives like the BarCamp conference, the entrepreneur marathon Startup Weekend, meetings with the community at the Startup Grind and locally-grown Startup Awards competition.

Such activities lead to the fact that startups have become a trend with an enlarging community in Slovakia. However, compared to the startup ecosystems in Great Britain or Nordic countries it is still a rather messy and unorganised market, according to Marek Zámečník, co-founder of the international tech startup incubator RubixLab. 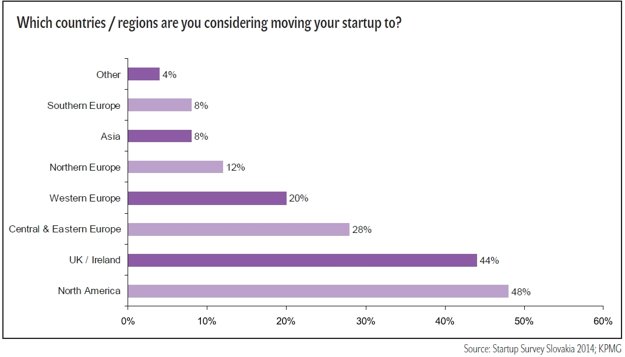 “In Slovakia, problems arise during the early phase of projects when people do not know where they can obtain initial information and integrate into communities of interested entrepreneurs,” Zámečník told The Slovak Spectator, adding that the situation was similar in western Europe a few years ago.

Well-applied companies in the market are mainly focused on the creation of Business to Business (B2B) software as it is the easiest form of startup. Zámečník stressed that the market with such ideas has begun to be slightly over-saturated with almost no innovation.

Economy Ministry of the Slovak Republic

State organisation for increasing the influx of foreign investment

“We had around 50 applicants in the incubator from Slovakia with up to 60 percent developing apps or software,” Zámečník said. “The market lacks more complex hardware innovation with R&D that an inventor cannot develop in a living room.”

In contrast, according to KPMG’s Startup Survey 2014, besides apps the most prominent Slovak sectors focused on by young entrepreneurs are hardware, equipment and e-commerce.

Business ambition and willingness to bear a greater risk favour young, educated people on the market. More than 79 percent of the startupers are between 25 and 34 and have university education or higher. However, first phase companies have been excessively relying on bootstrapping without an external investor. Private savings constitute 74 percent, angel capital 39 percent and venture capital only 15 percent of business financing in Slovakia, according to the survey.

Business as well as the access to specific forms of financing are supported by the Slovak Business Agency (SBA) as a common platform of public and private sector composed of representatives of the Economy Ministry, the Entrepreneurs Association of Slovakia (ZPS) and the Slovenský Živnostenský Zväz (SŽZ), an association representing self-employed trade and craft workers.

In mid-October 2015 the SBA conducted a conference called TechMatch Slovakia 2015 in Bratislava featuring discussions, mentoring and support of startups. The conference itself has become notoriously known for its inflated budget; afterwards US Market Access Center voiced its plans to invest $5 million into the Slovak startup ecosystem over the next 48 months. In addition, the Salesforce Ventures from Silicon Valley could support individual startups with the same amount next year. 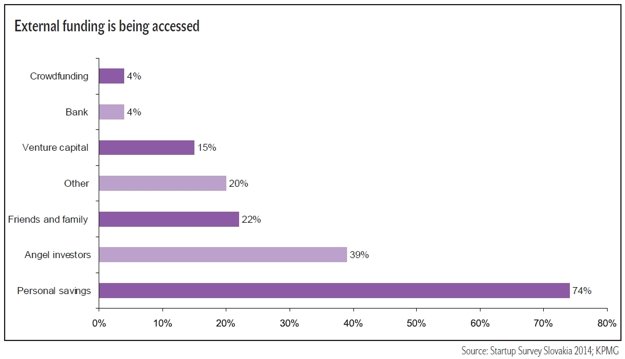 “Emerging Slovak companies would thus be granted access to partnership ecosystems, to major global partners and all of our customers,” said Neil Sands, vice-president of Salesforce Innovation, parent company of Salesforce Ventures, as cited by the TASR newswire.

One of the successful Slovak startups is Vestigen which develops equipment for diagnosis of health or life quality conditions. Since autumn of 2014, together with Google, it has been developing a module based on the sensor NephroSense for measuring the amount of glucose in the blood of diabetics and the proper functioning of the kidneys that could become a part of the forthcoming module smartphone Google ARA. In addition, future versions of the platform should analyse both the purity of water and soil quality.

“Our goal is to ship a platform that enables people to test liquids such as blood and water to prevent diseases,” Alexander Kriško, CEO of Vestigen, said during the Project ARA Developers Conference at the beginning of the year. “The technology is already here.”

The platform similar to the current glucose meter is based on a process using a disposable strip on which an ill person will put a drop of blood. After that, thanks to an electrochemical reaction, the device will measure the user’s current health.

Project ARA is customisable smartphone hardware that allows users to change the core fragments of a smartphone individually rather than replace the whole device. Google plans to launch the first smartphone under this project in 2016.

Vestigen is supported with necessary capital for the development of sensors by native Brazilian investor Grid Investments from 2013 that allowed the company to pass to a venture capital funding round. A startup that wants to be similarly successful must overcome all phases of financing such as angel, seed and venture capital. International statistics show that eight out of 10 startups fail within three years, according to SAPIE.

Funding of talented entrepreneurs to help them succeed globally

Co-working space based in a house in Patrónka district, Bratislava

Incubator based in the eastern metropolis Košice

Technological incubator on the ground of the University of Žilina

In the area of financing the Slovak ecosystem has slowly improved. Though promising ideas have been mainly funded by private savings, around 58 percent of startups have drawn finances from external sources, according to the KPMG study.

In terms of success, each company must turn into a scaleup. Scaleup is an enterprise with average annualised growth in employees or in turnover greater than 20 percent a year over a three-year period and with more than 10 employees at the beginning of the observation period, according to the Organisation for Economic Cooperation and Development.

Štefunko added that many of the scaleups and other startups obtain domination in the region by that point and lead to the ability to focus on other markets. Factors influencing success include being at the right place at the right time, with the right product and in particular a functional team, he said.

“If these conditions are met capital is no longer difficult to obtain,” Štefunko said.

However, investment from abroad depends on company know-how. Foreign investors come from more developed ecosystems and have more sophisticated requirements, according to Zámečník.

He added that each investor wants to buy and then sell the business with a profit, thus for a startup it is necessary to focus on the quality of the team, idea patents due to its usability and traction which means market acknowledgement.

“A startup must first obtain customers, afterwards it can take the business to an investor,” Zámečník said.

Recently, the Slovak government came with a plan to support innovative entrepreneurs amounting to more than €18 million until 2018 presented in the first document within the sphere called the Concept for Supporting Startups and Startup Ecosystem in the Slovak Republic.

The plan is based on better initial conditions for startups such as a simple joint-stock company unpretentious about input capital, three-year exemption from payment of the tax licence and exemption from paying the VAT-payer guarantee fees, visas for companies outside the EU and various grants or startup financial possibilities.

According to Štefunko, application of measures is related to the fact that the public sector has started to perceive positive support of innovative business. The current government has focused on supporting the startup field as the first in Slovak history, he said.

Zámečník pointed out that the government suggested changes due to similar steps in neighbouring countries.

“The model is left over from the western countries, but fortunately Slovak representatives had chosen the best picks from the original form,” Zámečník said.

Additionally, the government plans to open the National Business Centre as the interface between entrepreneurs, R&D and academic sphere from the first quarter of the next year. The centre should support around 800 new businesses including startup and spin-off until 2023, TASR wrote.

According to SAPIE, setting the right legislation and supporting the private sector to use and grow on is the main role of the government in this field.

“Slovakia is one of a few European countries where public-private partnerships work really well,” Dzurovčinová said.

The role of incubators

Current opportunities of public sector lie mainly with the cooperation with existing ecosystem players such as incubators, co-working centres and accelerators in which strong and vibrant community of young motivated entrepreneurs meet, according to SAPIE. 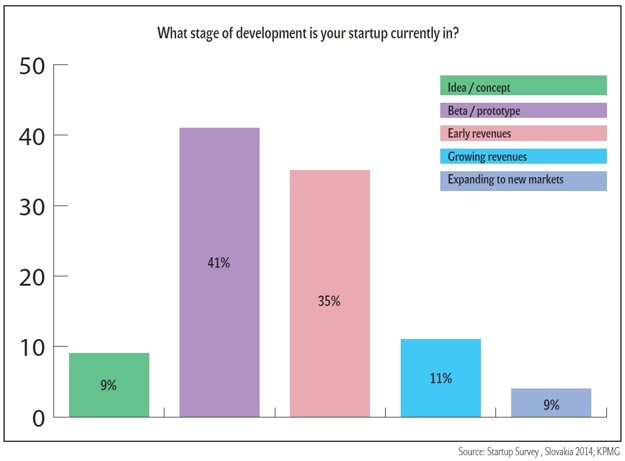 In recent years, entrepreneurial ecosystem has been driven primarily from Bratislava whereas it has been interconnected with major innovative cities like Vienna, Budapest or Brno and amplified by the Danube Valley project.

Well-known are co-working spaces working with local people in Bratislava such as Connect Co-working, Brainhouse, The Spot and Clusterhaus, but also other regional centres Eastcubator in Košice and co-working VTP in Žilina and globally active incubator RubixLab.

The role of co-working centres and incubators is based on co-financial support, providing space for startups and mentors, creation of business synergies and giving a variety of ancillary services with businesses like accounting, said Zámečník.

“Networking is also important for a new startup because other people from the field can advise other ways of its realisation,” Zámečnik said.

According to Dzurovčinová, also hanging out in one of the coffee-houses around Bratislava’s city centre can help to get the proper networking and information from the startup scene.

“In coffee-houses such as Foxford, Gorila Urban Space or Kontakt you can always meet an innovative crowd whose talent might make Slovakia world-famous one day,” Dzurovčinová said.

Startup which was established in 2013 has focused on the development of diagnostic sensors to analyse vital fluids and soil. Currently it has been working with Google to develop a module based on liquid sensor NephroSense for module smartphone ARA. Company’s activities are co-financed by the Brazilian investor Grid Investments.

Digital content monetisation and audience intelligence platform for publishers and media companies was established as a joint-cooperation of online advertising company Etarget and media consultant NextBig in 2011. After the initial success on the Slovak scene, the startup also established itself on other European markets. Later it bought an American rival Press+ thanks to which Piano Media has become the biggest provider of paid content in the world.

Local Startup Awards winner CulCharge began its activities with minimalistic charge and data USB cable for iPhone and Android devices on the crowdfunding server Indiegogo two years ago. The success that surpassed company’s expectations has launched them into further R&D in the form of a wearable 3-in-1 Powerbank recently supported by the mobile operator Slovak Telekom.