PHILANTHROPIC activities are gradually becoming a natural part of the corporate life of companies active in Slovakia. 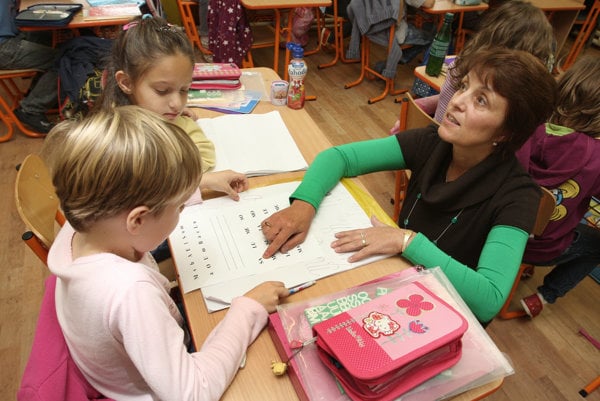 Not only is the interest of firms to support public interest projects increasing, but also invested funds are gradually returning to their pre-crisis levels, philanthropic organisations agree. Despite the positive trends, Slovakia still cannot be compared with its western European neighbours.

Among the most financed areas in Slovakia is education, whose dominance was shown by the so-called philanthropic map drawn by the Pontis Foundation a few years ago. The importance of this sector has been proven also by the recent survey carried out among individual donors and companies, which observe the unpleasant state of education in Slovakia, said Pavel Hrica of the Pontis Foundation.

“Most of the companies invest their funds or tax assignation as compensation measures which only substitute for what should be offered by the Slovak education sector,” Hrica told The Slovak Spectator, specifying that this includes school equipment or furniture.

Many companies also support the development of programmes at schools, like IT education, or the transformation process at schools, he added.

“In other words, we all know that our education system is in bad condition, but we currently only fill the gaps or carry out only small activities, but we do not try to solve the core of the problem,” Hrica stressed.

The need to support the education sector may even intensify in the coming years, especially thanks to changes made to support mechanisms and the possibility of getting tax reliefs, adds Marcel Dávid Zajac of the Centre for Philanthropy.

The focus areas of corporate philanthropy have not changed during the years. Since its beginnings in the 1990s, companies have allocated money mostly for community projects, as well as to the health and social sectors.

“The foundations and donors focus on areas which are often presented as the most problematic, the most urgent ones that receive the least money from society,” Zajac told The Slovak Spectator.

One of the exceptions is the SPP Foundation which invests big money into reconstruction of cultural and historical monuments. Though currently it belongs to the top areas where much money from this company goes, Zajac does not expect this will be true also in the future.

Another area to which companies may focus in the future is non-professional sports.

“This is necessary mostly because it becomes preventive against various dependencies and negative phenomena in society, like criminality,” Zajac said.

Zajac sees another important trend in philanthropy: the changing character of foundations. Many of them were founded by the companies mostly because they did not want to use the money they received via tax assignation immediately, but to distribute it during the whole year. However, this has changed over the years.

“The foundations have mechanisms to check the impact of the allocated money and the accomplishment of the mission they set in their programmes and objectives,” Zajac added.

Moreover, the foundations do not use only the assigned money, but also their own funds to support activities, according to Zajac.

Another important trend is also that the individuals from the corporate sphere change their attitude to philanthropy and establish their own foundations. One of the examples of such activities is the J&T Foundation, which helps people in need. Zajac praises the mechanisms of the foundation and the ways it filters people who really need help.

Another example is the Stop Corruption Foundation, established by Miroslav Trnka of Eset, which is interesting for the topic it deals with.

“It is the most problematic issue which many people do not want to deal with,” Zajac said, adding that though it is controversial, it is very important since it influences other areas. “If we behave non-transparently, the society is not effective and it lacks money for social, health or other topics in the public interest.”

Another example is the Stop Corruption Foundation, established by Miroslav Trnka of Eset, which is interesting for the topic it deals with.

“It is the most problematic issue which many people do not want to deal with,” Zajac said, adding that though it is controversial, it is very important since it influences also other areas. “If we behave non-transparently, the society is not effective and it lacks money for social, health or other topics in the public interest.”

As well, Hrica sees some changes in corporate philanthropy which are still very conservative when it comes to financing experiments or bigger systemic changes as it is abroad. Three years ago, companies were not willing to support the fight against corruption and increasing transparency, but now there are nearly 20 companies that support activities of the Fund for Transparent Slovakia.

After several years of decreasing amounts of money allocated for donorship, we see the sums gradually returning to their pre-crisis levels, according to Hrica.

“On the other hand, this situation has helped to mobilise other forms of philanthropy,” he said, specifying that volunteering activities of companies and pro bono activities are on the rise.

Moreover, not only the branches of international corporations, but also the companies of Slovak origin and the owners of startups are becoming interested in philanthropy, Hrica added.

One reason for such a state is the new stabilised model of tax assignation. Under the current rules, companies can allocate 2 percent of their corporate taxes to non-governmental organisations if they also contribute at least a sum equalling 0.5 percent of their due taxes. Otherwise they can assign only 1 percent.

“This should especially motivate big companies to donate their own gifts to increase their assignation, which already belongs to their activities made in favour of the community,” Hrica said.

There are also increased activities of foundations established by individuals active in the business sphere. The J&T Foundation, for example, is very clear in what they want to do and from which sources they finance the activities, according to Zajac.

Hrica also mentions the activities of Michal Truban of Websupport companies, who launched the Slovensko.digital campaign which fights against corruption and wasting money on the so-called informatisation of society, or owners of the developer HB Reavis who invested their money into the Leaf association. Other interesting projects include the activities of the Profesia company which created the Edujobs website, where job offers for teachers only are published, or the TaylorWessing law firm which helps nearly all important watchdog think tanks to improve their job.

Compared with the other post-communist countries, Slovakia is at the top when it comes to corporate philanthropy. An increasing number of companies consider it a necessary activity which supports the environment and also helps keep and develop the talent and loyalty of their employees, according to Hrica.

Yet it cannot be compared to the western European countries or the US. One of the reasons is that corporate philanthropy in Slovakia is based on a different principle: it is the only country in the world it offers tax assignation also to corporate entities, Hrica explained.

While in the westerm model, the companies are divided into several groups depending on how much public benefit they have (which then impacts the tax reliefs the companies get), in Slovakia there is the system of corporate foundations with the highest public benefit status, Zajac added.

“We enabled the corporations to decide on the money and force them to put it into the areas of public benefit,” Zajac said.

Moreover, Slovakia lags behind when it comes to the support sent abroad, Hrica said. He compared the activities to the Netherlands where nearly all corporate philanthropy goes abroad.

“This is not good,” Hrica added. “Since we already belong to the most developed countries of the world, we should take our share of responsibility.”