Charging cars up to 3.5 tonnes for kilometres driven on toll roads is not proposed. 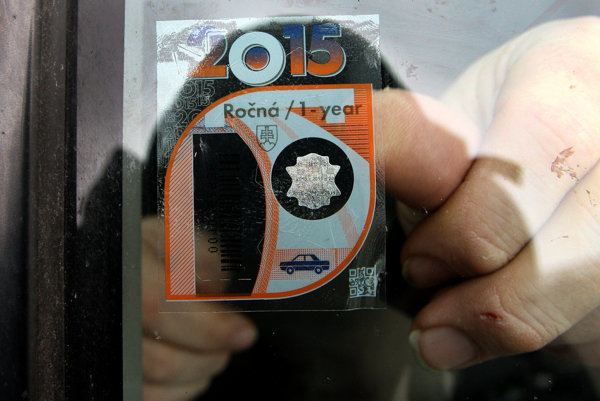 Stickers on windscreens will be a thing of the past. (Source: Sme)
Font size:A-|A+3

WHILE the introduction of an electronic toll system for freight transport in 2010 was accompanied by a number of problems, the National Highway Company (NDS) is implementing an electronic highway sticker system for vehicles under 3.5 tonnes with positive expectations. The new stickers will be valid as of January 1, 2016.

“I look forward very much to having this system because it is worthy of the third millennium in which we live,” stated Transport Minister Ján Počiatek during the formal launch of the pre-sale of electronic stickers on the Slovak-Hungarian border crossing in Čunovo on December 1, as cited by the TASR newswire. “Sticking stickers on windscreens is already quite an outdated, primitive system.” 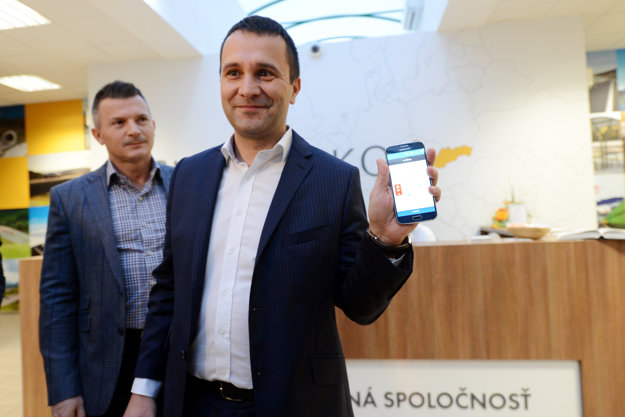 The new system should bring better collection of payments for usage of highways and dual carriageways and fines for those using toll roads without stickers. It should also eliminate the drawbacks associated with the former paper stickers. According to the NDS, drivers no longer need to place a sticker on a visible part of their car’s windscreen only to scratch them off when they become invalid. Stickers valid as of January 1 2016 will only be in electronic form.

“The driver is also not required to submit confirmation of payment for control purposes and install an on-board unit or another device in the vehicle,” Eva Žgravčáková, spokeswoman of NDS, told The Slovak Spectator.

Road carriers perceive the electronic stickers positively. According to Stanislav Skala, a member of the board of the Union of Road Carriers (UNAS), it is the logical evolution of the current internet era and cost reduction which will increase the efficiency of collection of the fees and the quality of transport.

“We hope that the state will have larger income from the electronic stickers than from the traditional ones,” Skala told The Slovak Spectator, “and the collected money will be returned to the infrastructure.”

However, the Transport Operators Association (ČESMAD) does not expect an increase in collection of tolls.

“We do not think that the change will have an impact on effectiveness of collection of fees for usage of highways,” Andrej Fekete, spokesman of ČESMAD, told The Slovak Spectator, adding that people who used to drive on highways without stickers would not now buy the e-stickers.

Fekete warned that such technologically demanding systems may be subject to malfunctions, which could cause complications in the future.

E-stickers valid in 2016 have already been available in more than a hundred stores, vending machines at border crossings, via the website Eznamka.sk or the mobile app Eznamka. When buying an electronic sticker, the driver must specify the car’s licence plate and registration country data that will be entered in a central registry.

Prices of particular sticker types have not changed. The annual sticker costs €50, the monthly sticker €14 and the 10-day sticker €10. The holder of a parking card for a physically disabled person who has been previously registered does not need to pay the fee. The validity of annual stickers will last from their purchase date to January 31 of the following year as in the past.

Checking for stickers on highways will be easier as cars will not need to stop for physical inspection to see if a sticker is on the windscreen. Instead fixed and mobile devices will check whether a car has paid for usage of tolled roads while the so-called institute of objective responsibility will be employed, according to Martin Kóňa, spokesperson of the Transport Ministry. Based on that, not the driver but the owner of the vehicle will pay the fine if an inspection determines that the car is driving on tolled roads without an electronic sticker.

The system will be able to check 90 percent of the cars that pass through the highway network on any given day, according to NDS.

“A vehicle that is on the highway without an e-sticker will not ride without being captured for more than four days,” said Milan Gajdoš, director of NDS, as quoted by TASR, adding that driving without the sticker will not be economically beneficial.

Transport analyst Jozef Drahovský deems the new inspection method as favourable to the safety and flow of traffic because it will be done when vehicles are at normal speeds.

“The checks are carried out only on an occasional basis now,” Drahovský told The Slovak Spectator. “The e-sticker checks will run continuously 24 hours a day and at night which will bring fewer rides without stickers.”

Regarding current sales, during the first half of 2015 more than 1.8 million highway stickers were sold and in the third quarter it was about 1 million, according to the NDS.

Based on the contract, the Transport Ministry does not plan any change in the toll scheme for cars up to 3.5 tonnes. This means that these cars will continue to pay for usage of tolled roads for certain periods of time, such as 10 days, one month or one year. Vehicles above 3.5 tonnes pay for the actual kilometres driven on tolled roads.

The e-toll scheme for trucks over 3.5 tonnes launched in Slovakia in 2010 became much less popular after SkyToll won the controversial procurement to run the toll system. The launch of the system was accompanied by protests by truckers as the new system increased their costs because rather than paying a flat amount for highway usage, truckers and trucking firms had to start paying tolls based on the actual number of kilometres driven on toll roads.

Introduction of the new scheme increased revenue from toll roads, according to Kóňa, adding that carriers try to plan their routes more efficiently.

To curb bypassing of tolled roads, trucks heavier than 12 tonnes were banned from third-category roads and some second-category roads in 2014. E-toll tariffs changed too to benefit “greener” trucks.

The system of onboard units used to measure a vehicles’ road use via satellite, also enables monitoring of the intensity of transport.

“On its basis, the local authorities in cooperation with the police may decide whether to put up signs prohibiting the transit of trucks on particular sections of road,” said Kóňa.

Drahovský pointed out that the non-systematic ban on second and third-category roads has resulted in restricted access to some villages that do not lie on first-class roads.

“It is not possible to enter these villages without a fine, even if it is unloading there,” Drahovský said.

According to Skala, the overpriced e-toll system has a devastating impact on the Slovak transport sector with high fines impacting drivers and companies going bankrupt.

“Introduction of e-stickers for freight transport at that time would have been a much more effective way of obtaining funds for road construction,” Skala said.

Drahovský proposes to change the philosophy of the electronic tolls so that all the roads are tolled per kilometre.

“This would motivate drivers to use primarily highways and revenues would go directly to the administrator of the relevant section,” Drahovský said.