For the past seven years, central and eastern Europe’s foreign policy establishment has been critical of US President Barack Obama’s approach to region. 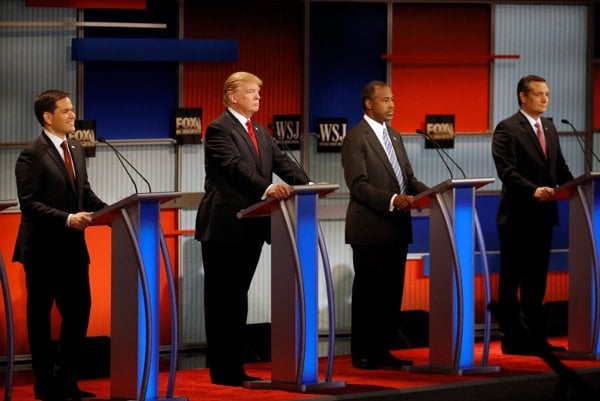 An open letter back in 2009 accused the Obama administration of ignoring the region in its international relations priorities and many are critical of the decision to scrap a missile defense system in Poland that same year.

A lot of those same critics contend that a Republican president would take a stronger interest in the CEE region, but if the debate among nine Republican presidential contenders in Las Vegas on December 15 is any indication, they are sorely mistaken. Europe, never mind central and eastern Europe, was hardly mentioned at all.

Here in the United States much of the talk remains about Donald Trump, the billionaire real estate developer who has proposed to ban all Muslims from entering the country. In a debate that was meant to focus on foreign and security policy the discussion focused on domestic immigration policy.

The most intense clash saw Ted Cruz, a Texas senator, and Marco Rubio, a senator from Florida – both of sons of Cuban immigrants – argue about who would deport more immigrants.

When foreign policy was discussed the candidates emphasized military spending and how many bombs they would drop on ISIS. Cruz wants to “carpet bomb where ISIS is”, though it is unclear what that means for civilians in ISIS controlled major cities like Raqqa in Syria (more than 200,000 people), and Mosul in Iraq (600,000 people).

Chris Christie, the governor of New Jersey, pledged to shoot down Russian planes in Syria if they violated a still nonexistent no-fly zone. But there is reason to doubt Christie’s judgment in international affairs as he also said he plans to strengthen relations with King Hussein of Jordan – who died in 1999.

Carly Fiorina, the former CEO of Hewlett Packard, said she would revive to the missile defense plan and John Kasich, the governor of Ohio, said he would move to bolster relations with the Baltic States. Neither will be president, and other than that Europe received almost no mention whatsoever.

If the debate were any indication, Republicans have little interest in or knowledge about central Europe. Foreign policy experts in the region might take a look at the priorities listed in that aforementioned 2009 letter.

One called for reaffirming NATO’s commitment to collective defense, but few countries meet their pledge to spend 2 percent of GDP on defense. Another called for a common EU defense policy that is nowhere near happening. Another emphasized diversifying energy supplies, but a new Russian pipeline is under negotiation in northern Europe and Slovak opposition to the plan is based on its own desire control the transit of Russian gas to Europe.

There is a lot central Europe can do to make itself more secure, but betting that any of those people on stage in Vegas is a big gamble.