BEMOANING the commercialisation of Christmas is a cliché. But if one thing demonstrates Slovakia’s rightful place at the centre of Europe, it is the single-minded pursuit of Mammon at Yuletide. So let us embrace it! 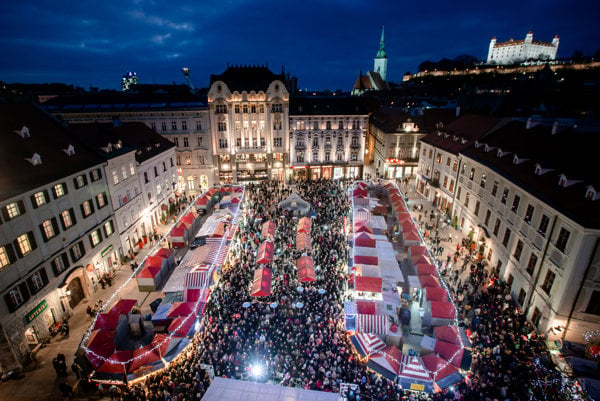 After all, ’twas not always so. In 1995, in the run-up to The Slovak Spectator’s first Christmas in print, finding anything to buy – with the exception of a live carp sold from a paddling pool – could be quite a struggle.

Back then, Hannah Wolfson helpfully reported on places where readers could find a Christmas tree, albeit one likely purloined from a state forest – and slightly the worse for wear: “Don’t expect to find shops selling specially grown, perfectly shaped trees,” she warned.

Her hot tip for a tree – “between 100 and 300 Sk,” ($3-10), but only “towards the end of December” – was Dúbravka, in the Bratislava suburbs, which then boasted no fewer than two Christmas markets.

There’s little sign of them now. But 1995 was before shopping centres like Aupark, or the monstrous Bory Mall, had arrived – and brought with them Christmas starting in late September.

The one place where you could be sure of picking up a tree in 1995 was K-Mart (“can’t match Bloomingdale’s or Harrods,” Hannah commented, with wry understatement). Their biggest artificial tree, a “mock Scotch fir” would set you back an extraordinary 1,790 Sk, or about $30.

“Christmas time should be simple, it should be about calm and introspection ... but the way people run around here in a frenzy is not normal. Everyone wants to spend 10 hours shopping.”

Jozef would not have been impressed with subsequent developments.

By 2009, Lucia Nicholsonová was reporting (in Spex magazine): “Christmas is here again. Shiny, colourful, chintzy, and above all shockingly expensive.”

Describing a miserable day’s shopping, she continued: “Signs that we should start preparing for the annual holiday of peace and love nowadays come not from the jingle of bells, but from overflowing parking lots and hopeless traffic jams around shopping malls.”

As you may have noticed, it’s not got any cheaper, or much less hectic, since.

A cup of scalding punč at the Bratislava Christmas market will now cost you as much as a small, wonky Christmas tree did 20 years ago. But as you stand there, with your toes slowly freezing despite the fat from that lokša dripping onto them, console yourself with the thought that this, my friends, is the price of what they call progress.

Bah humbug – and Veselé Vianoce to all of you!