The end of the year brought rallies by teachers and nurses fighting for higher salaries. 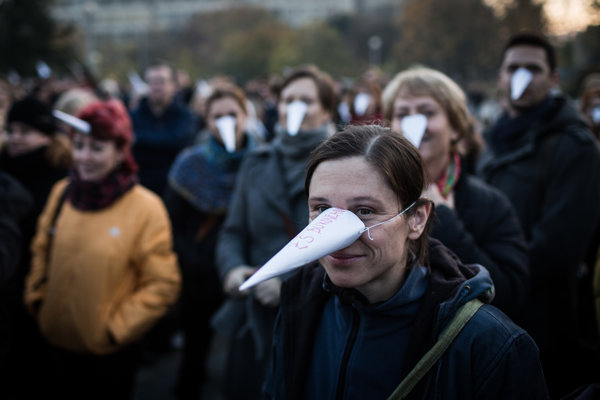 Teachers started their protests in early November, following an agreement on a salary hike of 4 percent for all state employees next year. The Slovak Chamber of Teachers called on the government in mid-October to secure an increase of €140 in tariff salaries for all teachers and professional employees in the school system by early 2016 and another €90 increase in 2017. They have also demanded a €400 million increase in the Education Ministry budget and restoration of the credit system that allowed teachers to increase their wages via various bonuses.

The Initiative of Bratislava Teachers then organised several protest actions to point out the poor condition of the education sector, with some teachers even mentioning the possibility of initiating a strike. Though Education Minister Juraj Draxler admitted that the sector needs more money he said this will be a task for the next government.

The actions by nurses has been more radical. Similarly to doctors back in 2011, they started handing in resignation notices in late November. By mid-December more than 1,000 had given their notices.

The notices came as a response to the law on salary conditions of health-care employees, with nurses saying that the Health Ministry did not include their demands. Though changes will increase the salaries of more than 20 hospital occupations, nurses that work in doctor’s surgeries, spas and social service facilities are excluded. Nurses also are demanding that factors such as the number of years a nurse has worked in the sector be included in the calculation of one’s pay and to raise their basic salary after every three years of experience.

Health Minister Viliam Čislák, however, rejected all criticism and stressed that the salaries will actually increase. The effect of the new law will be seen only next February when nurses receive their January salaries.

The ministry said that about 200 nurses have already withdrawn their notices. 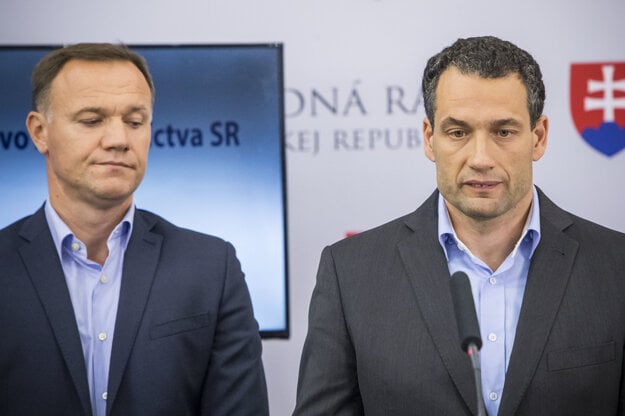 The domestic political scene has been dominated by scandals in health care ahead of the elections. The beginning of 2015 was still marked by a major scandal involving an overpriced CT device purchased by the Piešťany hospital. In September, the police charged eight people, including the hospital director Mária Domčeková, with the crime of violating duties when administering public property. Earlier in 2014, the scandal resulted in the largest changes among top posts of the Fico government when the health minister Zuzana Zvolenská stepped down and Pavol Paška, speaker of parliament as well as his deputy Renata Zmajkovičová resigned.

Since then, Zvolenská’s successor Viliam Čislák has faced two no-confidence votes initiated by the parliamentary opposition. The most recent in late October 2015 came on the heels of scandals surrounding the state-run health insurer Všeobecná Zdravotná Poisťovňa (VšZP) and its former head Marcel Forai.

Forai announced his decision to resign in September after Miroslav Beblavý of the non-parliamentary Sieť party raised suspicions that Forai preferred seven companies where his aunt Anna Součková is a partner. Beblavý backed his accusations with 69 agreements worth €14 million which VšZP had signed with these companies since 2012.

Slovak media have since reported on what they dubbed the “octopus in healthcare”, a Košice group of businesspeople close to the ruling party.

President Andrej Kiska said he had been left disappointed with the course of events at the turn of October and November. First, the parliament ignored the president’s call to draft a constitutional amendment to set retirement ages for judges, then the Constitutional Court dismissed a case he filed over how judicial appointments should be handled.

By the end of 2015, one and a half years into his presidency, Kiska found himself in a conflict with the Constitutional Court over the process of appointing the court’s judges.

The dispute goes back to July 2014 when Kiska rejected five of six candidates for the constitutional judge post proposed by the parliament. The rejected candidates then turned to the Constitutional Court. In three cases, the court issued a ruling in March stating that the president violated the rights of the candidates to access the public offices under non-discriminatory conditions.

Kiska then turned to the court with the question whether he must or only can appoint candidates for the post of a constitutional judge elected by Smer. The court refused to answer.

In December, the 13-member Constitutional Court functioned with only 11 judges and its head Ivetta Macejková admitted the shortage of judges is a problem. Another judge’s term expires in February 2016. On December 2, the Smer-dominated parliament elected two candidates for Kiska to choose from for the vacant post: its MPs Jana Laššáková and Mojmír Mamojka. 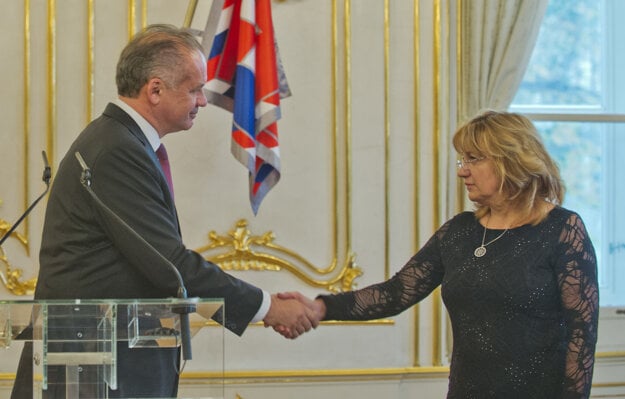 The Supreme Court, now presided over by Daniela Švecová, is dealing with Štefan Harabin and the consequences of his (now dissolved) penal senate’s controversial rulings. There are three disciplinary motions regarding the rulings of the panel, through which Harabin freed police officers convicted of corruption. The panel ruled that the police inspectorate had been established at odds with the law.

In the most recent motion from November, Supreme Court President Daniela Švecová filed a disciplinary motion against Harabin, requesting that he be transferred to a lower-instance court and have his salary halved. That would be his punishment for not convening the penal college of the Supreme Court to unify the conflicting rulings in cases pertaining to the police inspection.

In response Harabin filed a disciplinary motion against Švecová, proposing that she be stripped of her post, accusing her of bullying him for his legal opinion. He claims Švecová abused her post by acting wilfully and unlawfully when she divided the senate that he once led and convened it on her own accord to unify earlier rulings.

Earlier, on September 14, the Penal College of the Supreme Court voted with nine votes 14 to recall Harabin as its chair, at the proposal by Švecová.

In the beginning of the year, several news stories appeared describing Slovaks who had joined the pro-Russian separatists in the conflicts in eastern Ukraine. One of them was Martin Keprta, a past member of the Slovenskí Branci (Slovak Levies) group, which has defined itself as an apolitical and patriotic militia helping people during peace and defending their country during war. It runs military training courses to prepare members for a possible attack against the country. According to its website, its members help during natural disasters, offer hiking tours and help with environmental projects.

Since it was not clear whether Slovaks fighting alongside pro-Russian separatists in Ukraine can be punished, the parliament adopted an amendment to the Criminal Code in mid-November, introducing a new crime: the participation in combat activities of organised armed groups in the territory of another country. Under the new rules, Slovaks fighting alongside the unrecognised groups can face two to eight years in prison. The Justice Ministry also proposed to sanction passive participation in these activities, such as incitement and financial support, the SITA newswire wrote.

The paramilitary organisations have also made it into schools. The Denník N daily reported in summer that pupils at elementary schools in the villages of Ludanice and Preseľany (both near Topoľčany) trained with machine guns using blank cartridges under supervision by the Slovak Levies. They also provided courses on drug abuse prevention and about Slovaks’ Slavic ancestors and their connection to modern Slovaks and Slavic countries. The headmasters addressed by the media said they were invited because the group was not banned, but Education Minister Juraj Draxler expressed concern and asked headmasters to be more careful when inviting such organisations to their premises.

The Slovak School Inspectorate also said that the headmasters of the schools erred when they allowed the Slovak Levies to hold lectures on their premises. They allowed this paramilitary organisation to prepare the lectures without asking for any identification and they did not evaluate available information about the activities and character of this organisation, according to the inspectors. This resulted in incompetent and unprofessional presentation of certain topics, the inspectors added.

The inspectors recommended that the headmasters adopt measures to remove the deficiencies and prepare a response about the incidents, TASR reported.

Moreover, the Sme daily reported in late-October about groups of Slovak Levies patrolling near the refugee camp in Gabčíkovo. 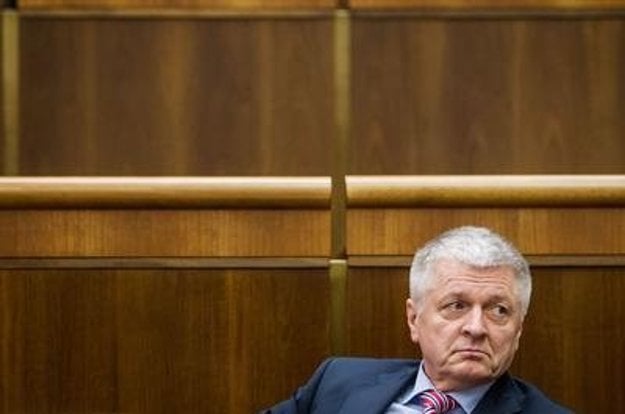 Compared with the previous year, 2015 has been uneventful when it comes to ministerial exchanges. At the Economy Ministry, which has been headed by three people so far, the current minister, Vazil Hudák, replaced Pavol Pavlis who served in the post less than one year.