Blog: Only one of five state managers survived Fico’s rule

PUBLIC companies have remained strongly politicised. More than half of state representatives on their boards and supervisory boards were replaced by the second government of Robert Fico already in the first six months after elections. 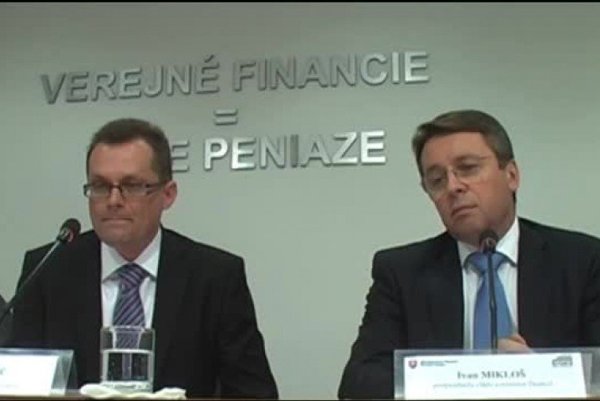 Miloš Ronec ran unsuccessfully for SDKÚ for parliament, for city and regional council. Finally, he proved successful as SDKÚ nominee at the helm of the state firm Tipos which he led from 2010 to 2012. (Source: Sme)
Font size:A-|A+1

Former finance minister Ivan Mikloš (SDKÚ) approved a few days before the March 2012 election a bonus of 80,000 euros for Miloš Ronec (SDKÚ), the general manager of the state-owned joint-stock company Tipos. The state gave to ten state managers in this company a special bonus totalling more than half a million euros, for “excellent economic results”. According to Mikloš, they had deserved it due to the increased profit to a record €32 million. (Although Tipos admitted that the result of its economic activities was impacted also by the fact that it had re-evaluated the sum of reserve which it had been collecting for a potential loss of a lawsuit with the Cypriot company Lemikon).

These staggering amounts may give the impression that the state managed to nominate the best managers to Tipos who can create huge profits, and thus the politicians will try to keep them.

However, the reality is quite the opposite. Only two of ten members of the board and supervisory board survived the inauguration of new Finance Minister Peter Kažimír of the Smer party for more than six months. The survivors were both long-time employees of Tipos who represented employees on the supervisory board. One of the reasons which Kažimír cited in argument was “immorally” high bonuses.

Smer nominee Ladislav Kriška took the position of Ronec who had, after two years, to leave following stories in media about his purchase in a luxury clothing and shoe shop in Prague which he paid for with a company credit card. Bratislava Smer official Ján Barczi became his successor.

The example of Tipos clearly shows, too, that posts in managing and controlling bodies of state companies are perceived by still many politicians mainly as loot for people close to the party. Their managerial skills are secondary.

This is not a small thing, as only 80 important state-, city-, and regional companies whose openness was evaluated by Transparency International Slovensko in spring 2015 in a transparency chart manage a total of €9.5 billion a year. To paint a clear picture – this is a sum which exceeds half of the state budget expenses. The fact that the future quality of highways and railways, how effective will be anti-flood protection of our cities, or which treatments will be remunerated by the state health insurer depends to a great deal on the quality of managers of public companies.

Hard data confirm, however, that managers in these companies change based on the election results, rather than based on the results they achieve. This stems from an analysis in which we mostly looked – on a sample of 100-percent state-owned companies – at what is the relation between shuffles on their boards and supervisory boards and election cycles since 2002.

The data of the Firemný-register.sk website imply that in the first 12 months after parliamentary elections, on average almost two thirds of positions in state companies are replaced (sample of 45 companies). The situation is similar with city companies (sample of 17 firms), where 60 percent of managers are replaced within one year after elections. With regional companies (sample of 9 firms), the number is more than 35 percent. Here, the slightly weaker earthquakes in companies falling under local self-administrations are connected with the fact that a fraction of mayors, regional governors and councillors remain in their places after elections. In comparison, with a sample of 63 important private companies, less than one quarter of managers changes in the same period of time.

From among four governments since 2002, the managements were most intensively replaced by the government of Iveta Radičová. In 45 crucial state firms comprising a total of 375 managers, in the first 12 months after elections, 277 lost their posts, or 74 percent.

The then-politicians of the ruling coalition: SDKÚ, SaS, KDH and Most-Híd argued, for example, with their distrust towards nominees of the previous coalition of Smer, HZDS and SNS. However, the numerous scandals of their successors show, too, that the effort for better quality might not have always been the priority. Enough to mention, for example, are the cases of two “golden parachutes” in the Košice heating company when SDKÚ and SaS managers received a redundancy payment of €90,000 after a few weeks in their positions; the overpriced training about corporate values in a five-star hotel for managers of the National Highway Company, or the direct order of State Forests for supplying wood for the company of a famous agriculture minister Zsolt Simon (Most-Híd).

Also the second government of Prime Minister Robert Fico started to replace “untrustworthy” managers immediately after the 2012 election; during the first year, it replaced more than two thirds of them. However, their managerial crew failed to bring about greater change as well. We can mention here the removal of the head of state MH Development company who rented a car from himself for state money, dismissal of general managers of state hospitals in Poprad, Banská Bystrica and in Trnava due to overpriced contracts with external companies for delivery of meals, or the fall of the head of state health insurer Všeobecná Zdravotná Poisťovňa because of his contracts with his own “auntie Anka”, aged 77.

If we look, for comparison, again at a sample of private companies the politicising will show very clearly. While in state firms one month is enough to replace more than 28 percent of representatives of boards and supervisory boards (September 2010, three months after the victory of the Iveta Radičová government); with a comparable sample of private companies, more than seven percent of managers have never been replaced within one month.

While an average lifespan of a representative on the board of a private company is 3.4 year, in state firms it is a mere 2.6 years. The biggest change in managers can be seen in the state company Hydromeliorácie which has had, in just over 12 years, already 15 CEOs. In firms owned by regional self-governments, the record is held by the Banská Bystrica Regional Roads Administration where members of the board do not spend even one year in their position on average.

One exception from this rule is the state forestry-agriculture company Lesopoľnohospodársky majetok Ulič (in the Snina district), the head of which, Alexej Németh, as well as his deputy, Štefan Salaj, have kept their positions since 1999.

We in Transparency are sure that if political nominations are preferred to the selection of good-quality managers in tenders and by retrograde evaluation of their results, this can have a considerable impact on the effectiveness and management of public firms. Thus, we are appealing to political parties to take into consideration, when preparing political programmes, also changing this “tribal right” which has become routine over the years.

If not, then – regardless of the results – also the current head of Tipos and Bratislava official of Smer Ján Barczi should start looking for a new job. If Smer fails in March to stay in power, Barczi may end up just like his predecessors after the last four election terms. None of them survived the arrival of a new government in his position.

The last of them, Miloš Ronec of SDKÚ, who was so generously rewarded by  minister Ivan Mikloš for “excellent management” in a state company, ended up in a tiny Trenčín-based IT firm TriloBit Systems with fewer than ten employees. In his professional CV on the Linkedin social network, he does not state his work for Tipos at all; there remains a gap in his professional experience between the years 2010 and 2012.

And yet one could say he has nothing to be ashamed of. That is, if we ignore the highly publicised cases like the gift of €70,000 from Tipos to an unknown association of tennis player Dominka Cibulková whose mother was Ronecs’ party colleague, sponsoring of car racers headed by his subordinate, or the investment for a personal driver to serve the general manager.

This article is part of the project Increasing transparency in state-owned companies financed by the Open Society Institute in Budapest If you like the article and would like us to continue watching the work of state-owned companies, please support us also financially. Thank you!