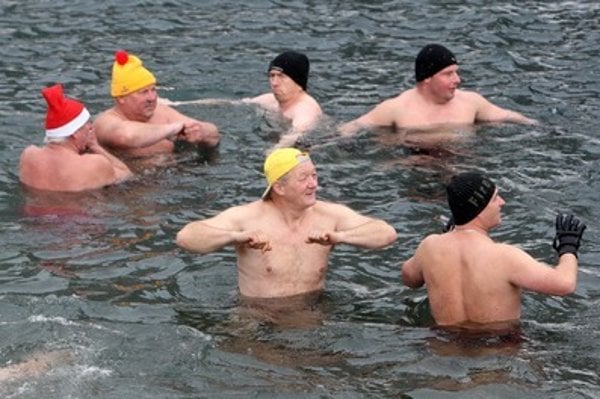 More than a hundred so-called polar bears, i.e. cold water swimmers, from throughout Slovakia along with a fellow colleague from the neighbouring Czech Republic met in the Žabokreky nad Nitrou village (Trenčín Region) for a dip in water of 3 degrees Celsius on December 27. The traditional winter swim was part of New Year’s Eve swimming sessions organised annually by polar bears of Veľké Uherce and Patrizánske.

“There were bears from the whole of Slovakia,” said polar bear František Belis as cited by the TASR newswire. “They are friends with whom we meet ... and join swimming events at various places and towns.”

Belis mentioned that the youngest generation is joining the ranks of swimmers, represented by, for instance, five-year-old Natalka of Bošany.

“We are pleased to see even smaller girls gradually joining us,” he said.

Belis claimed that swimming in ice cold water is healthy.

“In the past three years I have always drowned all bugs in that cold water and never came down with any cold or anything of the sort,” said Belis.

The water, according to swimmer Anna Zelezníková, was excellent.

“It wasn’t warm, but neither was it cold,” said Zelezníková. “We already were in colder.”

Being a winter swimmer is a different experience, said Zelezníková.

“It’s hard to explain,” she said. “I’ve got a different joy from this than I have from summer swimming. It’s a different type of energy for the whole body. It makes me very happy.”