Opera on immortality has new life

RENOWNED German opera director Peter Konwitschny has already cooperated with the Slovak National Theatre several times – including the Boheme which is still on the repertoire. 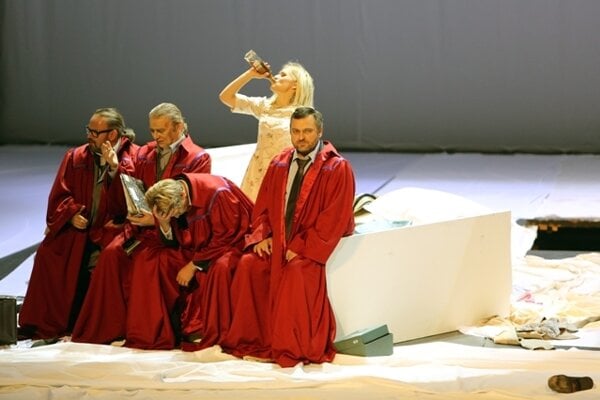 This time round, he decided to direct a piece tailor-made for the theatre – and quite a demanding one, for that matter.

The Makropulos Affair is an opera by Czech Leoš Janáček, with the libretto being also written by him inspired by the eponymous work of writer Karel Čapek. After previous smooth collaborations, this one showed to be quite a tough nut to crack: original conductor, Czech Tomáš Hanus left a week before the premiere, complaining about the cast and cooperation of the orchestra. He was replaced by Ondrej Olos.

Konwitschny himself also showed some dissatisfaction with the course of work, as Slovak media reported, but the work premiered successfully (a week later against original plan) and seems to be now living its own life and filling the audience hall of the SND’s historical building.

“I don’t see it as a scandal,” he informed the Slovak Spectator. “Mr Hanus left because the arrangement for only a single alternation of the orchestra was not kept; and Mr Olos who took over needed some more rehearsals with the orchestra, understandably. I had more serious problems with the stage equipment.”

The director bet on a single cast without any alternations, with the main character of Elina Makropulos (aka Emilia Marty, or Edina McGregor) being sung and played by Linda Ballová. Konwitschny added, concerning this perception that double alternation “was not artistic”, and when he elaborates with a singer a character like Elina, the result has much to do with the personality, but also the body and the “gesture pool” of this specific artist.

Those opera fans who remember the previous Bratislava stageing of this opera tend to compare the fragile, coquettish young blonde girl with the femme fatale of Elena Kittnárová; but the whole perception is different and the blonde ethereal fairy of an artist – in fact a full-fledged man-eater – shows other facets of what it means to be immortal, to watch the relatives and close ones die one after another – and to even meet ones’ own grandson as a flirting young wooer. Even those who might envy the beautiful girl (who drank the potion of immortality and eternal youth at age 16) in the beginning feel sorry for her when she decides to enter the world of mortals and live their life, with all its ups and downs.

“False pathos is the most stupid and harmful for the theatre, as well as for life,” the director commented. He added that Elina should be in fact 37 years old, and – more importantly – the context of a woman that does not want to live in the end of the play is different if she is 70 and says she has had enough of the good as well as of the bad: people think she has no power anymore, her body being exhausted and her faith, love and hope all consumed. However, if this is said by a young woman, the reason must be different – and you are faced with the core of the piece: being 337, there is nothing new anymore, all happiness, all desires and meanness enjoyed, Konwitschny explained. You become the burden for the planet and leave the stage for your successors – as if the tree never shed its leaves. He also praised Linda Ballová as a singer and actor who can handle any number of different roles.

The Makropulos Affair tells the story of the daughter of emperor Rudolf II’s alchemist who tried on her the “potion of eternal life”, thus sentencing her to roam around Europe for 337 years, watching wars, historical events and also personal stories passing by. Finally, she decides to help her descendant in a legal dispute, but also to drink the potion so that her never-ending life can go on; before her admirer and helper, a young girl, burns the dangerous mixture.

All the other characters, however wittily and funnily – and sometimes dramatically – outlined, revolve around the focal personality of the beautiful, talented and socially skilled woman who is, however, unhappy deeply in her soul and finds it hard to keep an ally and trustworthy friend.

The stage and costumes in the impressive historical building are subdued and defy any precise time- or place frame – they are, just like the story itself, universal in their essence. 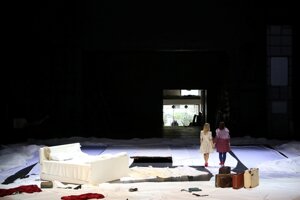 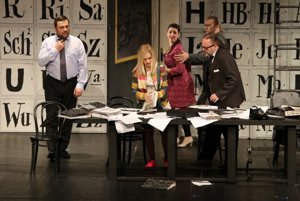 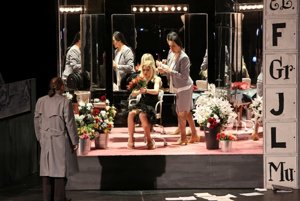 The Makropulos Affair in SND (4 photos)

Even more impressive is the culmination, in which the men around Elina flee across the auditorium to the side entrances, only to return later – from both sides – with a whole choir to support them. Equally impressive is the departure of Elina, through a hidden entrance in the background.

The less-played of Janáček’s works (Jej pastorkyňa/Her Stepdaughter was played in SND recently) seems to find its viewers, although being played in the Czech language, with German subtitles. The bulletin is also in English and it helps to understand the plot.

“I was already 66 when I staged my first Janáček, From the House of the Dead,” Konwitschny commented on the author of the opera. “The longer I got engaged with the music, the more enthused I was. I got to know the music which cannot be compared to any other. The Makropulso Affair…is an attempt, an experiment; it was created as the time when the Hybris, the pride of the human to be god, to be able to do anything and to control everything – to become immortal – acquired monstrous dimensions. The piece communicates to us that all this cannot make us happy, and that it is only the definitiveness that can make our lives worthwhile.”