It’s the New Year and everything is possible. In Slovakia, the first quarter of the year will almost entirely focus on the March parliamentary elections, and the second half will see the country in the European spotlight as Brussels diplomats, bureaucrats and journalists bring their traveling circus to Bratislava as part of the EU Council presidency. In the meantime, here are some predictions about the year to come in domestic, European and international affairs: 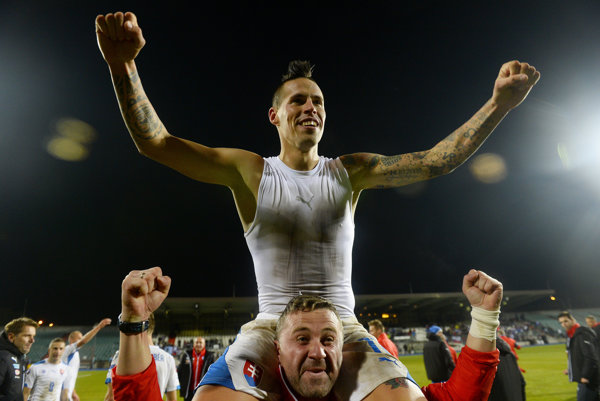 Slovakia will reach the knockout round the European football championships this summer. (Source: TASR)
Font size:A-|A+

Smer will win the March elections with an outright majority, but Prime Minister Robert Fico will not serve out the full term. Fico already indicated a desire to step down as prime minister when he ran for president in 2014. After a few more years in office, and assuming Smer has a majority in parliament that guarantees they stay in power, he might decide to go out on top — though likely not until after Slovakia completes its term holding the EU Council presidency.

In Slovakia, more Smer affiliated public officials than refugees will commit and be charged with crimes in 2016. The first of these predictions is almost guaranteed because there are lots of Smer officials in office at the national, regional and local levels. In comparison, a trivial number of refugees are likely to arrive in the country. However, charging and convicting public officials is not something the Slovak legal system has thus far appeared willing or able to do — but things are looking up as leadership in the judicial branch changes.

Slovakia’s term as the head of the EU Council will be a success. With the election out of the way in the early part of the year, a new government will be on its best behaviour as Slovakia takes its turn as rotating president. Even Fico’s rhetoric is likely to be calm and measured as the country seeks to make its mark in Brussels and reassure old EU members that Central and Eastern European states can get things done.

The EU will pass a common migration policy, Slovakia will support it and it may even happen as Slovakia holds the EU presidency. Among the biggest root causes of the migrant crisis in 2015 was the extreme variation in migration policies between EU member states. A plan to create a cohesive external border patrol service has widespread support, but greater cohesion on who does and does not qualify as a refugee is essential if the EU is maintain its single most popular feature — border free travel.

ISIS will lose control of almost all the territory it controls in Syria and Iraq, but will remain a threat by inspiring radicalized citizens in the West to resort to violence. Winning on the battlefield is far easier than defeating an ideology. Europe, Russia, the United States and regional players like Turkey and the Kurds look committed to removing ISIS’s safe have zone in the Middle East, but it only takes one or two isolated radicals to cause damage and spread fear.

Everybody will forget about Ukraine. Sad but true, as energy prices are at an all time low and the harshest fighting in Eastern Ukraine is now calmed, a tentative stalemate will take hold (if it hasn’t already). Few people even allude to the possibility of Crimea being returned to Ukrainian rule, and Putin looks content with codifying his informal influence in the east, for now. With Moscow and the West coming together to confront ISIS and EU member states like Italy already hesitant to extend sanctions further much of Europe looks content to look the other way. Unless energy security concerns flare up, few politicians look willing to bet their own job on confronting Russia.

Belgium will win the European football championships this summer and Slovakia will reach the knockout round. The French will have home field advantage and Germany is the favorite, but Belgium seems to have their version of a golden generation with top players who are young and in their prime with some of the world’s top clubs. Slovakia has a tough draw and will have to beat out either England or Russia in the group stage to advance (Wales is the other team in the group). They will.