This year focuses on preparation, but future improvements still depend on better finances. 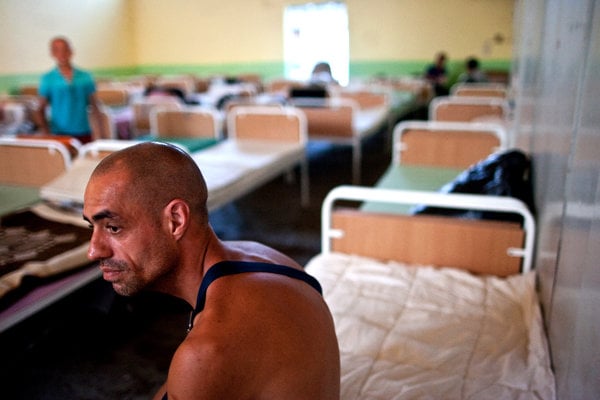 WINTER always means more pressure on facilities for the homeless and though things have improved since 2005, when as many as 19 people died in the streets of Bratislava from hypothermia, a systematic approach to the problem is still missing. But that could soon change.

Currently it is mostly non-government organisations and corporate donors that help the homeless, but the former warn that drawing funds entirely from private resources is unsustainable in the long term. Experts contend that the situation in Bratislava is worse than in Prague or Budapest.

“In the long-term we do not see sufficient drive on the part of the government or municipal bodies in solving the problem,” said Sergej Kára from the Vagus civic association during a press conference held on December 8. “Corporate donors are losing patience.”

According to Vagus data, a total of €1,657,059 targeted homelessness in Bratislava in 2014, a full 62 percent of which came from NGOs and private donors. In comparison the national government contributed 18 percent, Bratislava Region 11 percent, the Bratislava city council 6.5 percent and 1.6 percent came from Bratislava’s district offices.

To boost public funding and activities, the Bratislava City Council has set up a working group composed of local districts, NGOs and experts coordinated by Vagus and the Department of Social Affairs with an aim to prepare a Strategy for Dealing with the Problem of Homeless People in Bratislava for the years 2016 to 2021. The group is scheduled to submit material to the city council in the spring.

As a first step, the working group has prepared an action plan for 2016 that is based on the approved city budget’s allocation of €238,000, which is nearly twice the funding of last year.

“Working with homeless people, civic associations and NGOs which are trying to help them and to integrate them into society again is very important and necessary,” said Bratislava Mayor Ivo Nesrovnal. “We have tried to set aside the maximum possible amount in the budget to support projects in this field.”

However, the total allocation needed for all the steps that NGOs would like to undertake is some €50,000 higher, money that will need to come from somewhere else.

“We are pleased that the budget has been taken, whereas we previously worried that it could be much lower,” Kára said.

The NGO Depaul Slovensko which operates the largest low-threshold facility for homeless in Bratislava plans to apply for funds from the new budget. However, Jozef Kákoš, deputy director of Depaul, said that the amount for 2016 will only maintain ongoing activities.

“The increase will fill a hole that NGOs had to previously finance from other sources,” Kákoš told The Slovak Spectator. “To develop more, there will need to be finances.”

The government also has addressed the problem financially, via the Ministry of Labour, Social Affairs and Family. Homeless-focused NGOs have received a subsidy in the sum of €77,930 in 2015, according to ministry spokesman Michal Stuška.

The main objective of the action plan is to stabilise the existing services and to begin preparing an environment suitable for the formation of new services, according to Kára.

“As a priority, we need to get data on the number of homeless people,” Kára said. “We have also agreed on cooperation with the municipality of Prague and the NGOs which took part in the census of homeless people there.”

Since Slovakia gained independence, there has been no official census of homeless people, although they were partially summarised by the Statistics Office during the 2011 general census. According to it, there are 23,500 homeless people in Slovakia.

“If we do not know what quantities we are dealing with we can hardly determine the impact of the problem and find a solution,” Kákoš said.

Kára pointed to its expert survey in which almost 62 percent of homeless people in Bratislava originate from other regions of Slovakia. It is caused by very low development of required social services outside Bratislava, he said.

“Prague has a lower number of homeless people when the city’s population is taken into consideration,” Kára said, “that is likely due to the better availability of services in other Czech cities.”

He added that thanks to legislation Hungary also has better developed services. If there is a city or a village above 50,000 inhabitants, it must by law provide particular social services, Kára said.

Services accessible in Bratislava include four dormitories and four shelters, three daily drop-in centres, two centres for personal hygiene and a centre of integration. These are not sufficient for covering the demand, Kára said, pointing to 491 total beds for more than 4,500 people.

“It is one of the lowest percentages within central Europe,” Kára said, adding that problematic is also the centralisation of social services in the Ružinov and Vrakuňa neighbourhoods.

Before winter, Depaul’s biggest dormitory increased capacity from 150 to 200 beds and built indoor showers and toilets. They have about 170 clients every night, Kákoš said.

In addition, the homeless have been harmed by the Act on Railroads issued by the Transport Ministry that allows them to be removed from railway stations.

Kákoš said that the state does not understand that people need daily or integration centres since they can spend only nights in the dormitories and have to leave them during the day.

Kákoš also pointed to an insufficient health care scheme for the homeless when a person can get free medical treatment only when their life is in danger. This means that health insurance companies do not cover treatment of mild health problems, meaning that they are more likely to develop into something more serious.

Kára agreed that preventive mechanisms that would keep people in normal life are missing.

“Any social system that would avoid the falling on the street does not exist, except for material need benefits,” Kára said.

NGOs would also welcome financial consultancy services as the homeless are often financially illiterate. In this respect, Kákoš mentioned that in the United Kingdom there are advisors to help the homeless manage income and expenditures. In Slovakia, there are currently 3 million distraint proceedings for 5 million inhabitants, he said.

“To teach people how to handle their money is important from the point of prevention,” Kákoš said.

To protect people from drifting into homelessness the Labour Ministry’s Institute for Labour and Family Research, in cooperation with the Statistics Office and NGOs, plans to examine the tools for preventing and addressing the apparent and hidden homelessness during the period between 2015 and 2016.

“We propose that the first phase of the research should clearly define the term homeless, for example through the European Union typology ETHOS,” Stuška said. “At the same time we recommend analysing the possibilities of legal definition of the person without shelter and its implementation in the context of the social policy.”

Additionally, the ministry wants to create a system of multi-level housing involving different types of transitional houses, including rental apartments and social housing, by 2018.

“The system will create preconditions for the gradual increase of the standard of living and its accessibility for disadvantaged people and at the same time will increase their own personal responsibility,” Stuška said.