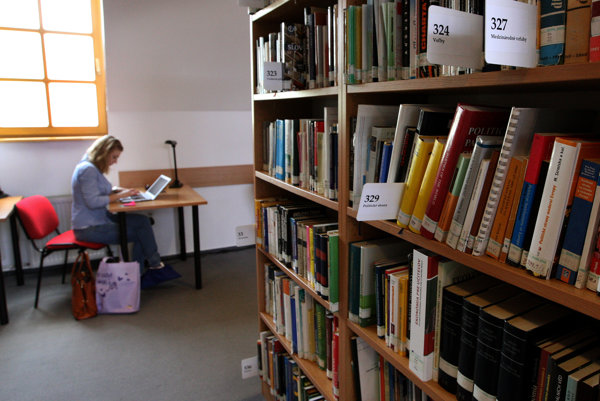 These travelled several thousand kilometres to establish the first Francophone library in Slovakia at the Juraj Fándly Gymnasium in the town of Šaľa. It was named after a Slovak poet, prose-writer, scriptwriter, dramatic advisor and visual artist, Albert Marenčin.

The library and the mediatheque with more than 3,000 books were ceremonially opened at the end of May 2015 and mostly holds fiction.

“Young people today read too little and have problems understanding the texts they read,” headmaster of the school, Vladimír Takáč, told the Pravda daily. In the future, textbooks and non-fiction could be added.

The books that came from private collections of donors or from French libraries were sent to Slovakia thanks to Bibliotheques Médiatheques Francophones, the French association of cultural partnership with Francophile countries .

The headmaster found space for the books in a special multi-media classroom where foreign languages are taught. He did not want to establish it in some remote corner of the school. “The library operates during breaks and it is the students who administer it,” Takáč said.

It is meant mostly for the school’s students but cooperation with elementary schools as well as the department of linguistics in Nitra. The French language has been taught at this Šaľa secondary school for more than 25 years.

This school year, one bilingual class has been opened, accepting students with zero knowledge of French language. It has been planned for more than two years in cooperation with the Slovaquitaine association that operates in the French region of Aquitaine, thanks to which a partnership with a French lyceum in Bayonne has been established.

“We were not satisfied with the idea of a mere school exchange that often shrinks merely to trips abroad,” said Gabriela Žiaková, founder and chairwoman of the association.

She opined that the Francophone library is a way in which to converge the two different cultural environments. “Our secret wish is to see generations grow with an enhanced world view, who will be able to translate our books into foreign languages. Maybe we could even manage to open a library that will offer our translated literature.”