More than million cars were produced in Slovakia in 2015

LAST year, more than a million cars were produced in Slovakia, according to preliminary data. Thus, the automotive industry exceeded the symbolic line, which it came close to in 2014 with 971,160 cars made. 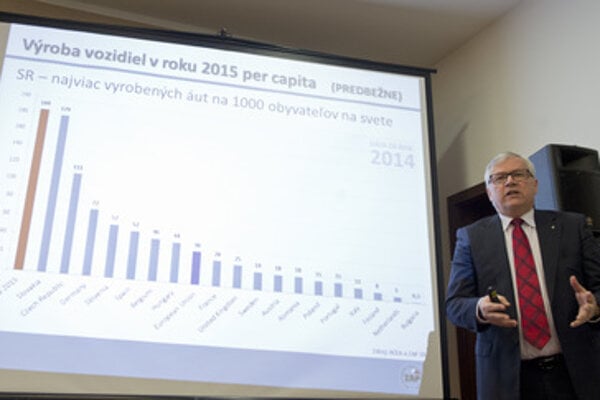 The Slovak automotive industry thus also confirmed its continually strong position in the domestic economy, representatives of the Slovak Association of Automotive Industry (ZAP SR) said on January 11, as quoted by the TASR newswire.

The share of automotive production in Slovak industry is 44 percent, while another positive is – for several years – that Slovakia is globally the country with biggest number of cars produced per 1,000 inhabitants: in 2014, this was 179 cars, while last year the number increased to 184.

Car production also constitutes 35 percent of the country’s exports. It employed more than 80,000 people, and including induced jobs, it made job offers for more than 200,000 employees.

Of the three existing carmakers, Trnava based PSA Peugeot Citroen made 303,025 automobiles last year, which is 18.7 percent more than in 2014. In Žilina based Kia Motors Slovakia, 338,020 cars were made, which is 4 percent more compared to the previous year. Volkswagen Slovakia will publish complete relevant numbers for 2015 only in March, but in the first half of 2015, it produced more than 202,000 cars, the SITA newswire wrote.