AMID the rush of holiday-themed shows and benefit concerts the noted French violinist of Russian origin, Alexandra Soumm, brought her music to the Slovak capital — a place that still holds a place in her heart. 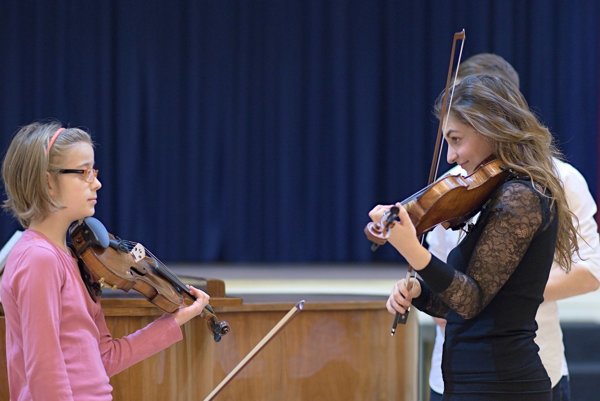 Soumm gave a regular concert in the Reduta hall of Slovak Philharmonic on December 15, as well as a benefit concert for children’s oncology ward of the University Hospital in Bratislava the next day. Before the second event, she also visited the children patients in person a played for them, going from room to room. At the beginning of her stay, she also have a master class for talented Slovak youths and some later joined her at the hospital concert.

“The very first time when I went out of my hometown without parents was to Bratislava,” Soumm, aged 26, told The Slovak Spectator. “I was 9 years old and I travelled with my music professor, Boris Kushnir, for two weeks; and the first stop was Bratislava. I really remember being in the hall at Reduta, and thinking “Wow, I hope I can play here one day”.

Soumm began playing at age 5, and performing soon after. Slovak violinist Pavol Bogacz Jr of the Sinfonietta Bratislava association which organised her stay (supported also by the Culture Ministry and the VÚB Foundation) said he remembered her playing Paginini at Reduta when she was 12 years old.

“I have many mothers and fathers who have helped me grow, and many places where I can feel at home,” Soumm said of Bratislava.

On the first night, she played with young French pianist Ismael Margain, while the next day she performed in the Big Evangelical Church with renowned Slovak violinist Dalibor Karvay and the children of Sinfonietta Junior orchestra. The selection of music also differed. On December 15, she performed George Gerswhin and some more modern, jazzy pieces, while the other programme was classical and Christmas-themed.

At present, Soumm is working on three Johannes Brahms’ concerts with Margain.

“We both love Béla Bartók, and I also love Prokofiev.... and we wanted to show something known by audiences but not that classical,” she said. “But we also choose with instinct.”

At the Reduta show there were five encores, and in the last piece, Soumm did not play but sang instead. 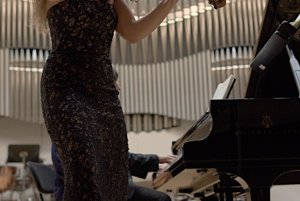 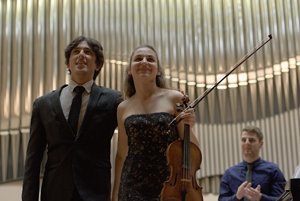 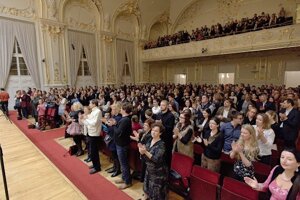 “I gave my first master class when I was almost 20,” Soumm said about another side of her stay in Slovakia. “Since then, I gave many of them in different countries. I do not have a regular class, but I am very happy to teach and share... and I think that because I am not so far from children it is good for the children to have someone like a bigger sister.”

Soumm has her own charity foundation, Esperanz’Arts, which brings music to people with limited access to it.

“As a child, I was very often taking the side of children in my class who were excluded,” she said. “I cannot take injustice. After I started my career, other concerns came; but when I was about 19 I noticed that there were almost the same people in the audience all the time. Who am I playing for? Which emotional connection do I have with my audience?”

Disabled, sick or homeless people “who maybe need the music even more” were missing, she said, so her and a group of friends began staging special concerts. Gradually, they found they needed a structure, and so the foundation came into existence. Soumm noted that she spent one of her best and most memorable New Year’s Eves playing a homeless shelter.

“The reactions are different,” she explained. “With everything that is happening in the world right now, we need to connect on the human level and say: OK, you are different, for sure, but we are all human and we share the same need of love and we all want the same things, more or less, with just different ways to get there.”