No logic or fairness is seen when ordering EU-ads: mostly benefiting from it are the JOJ and TA3 TV channels and Fun radio. 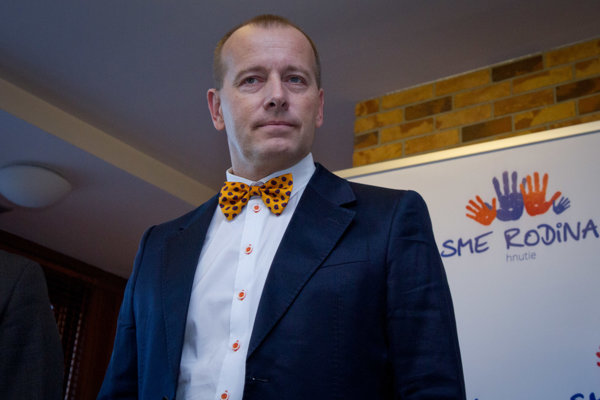 "I have been doing business for 25 years, and I do it in a decent way," Slovak businessman Boris Kollár said in November 2015, when founding the Sme rodina / We Are Family political movement. "If I failed to persuade people about my good work, they would not come to me, they would not come skiing, would not place ads to my radio... I can afford to say things truthfully, the way they are… They do not have any leverage on me, I did not steal with them."

Massive ordering of EU advertising to media in the second half of 2015 does not seem to be fair enterprise, though. The Fun Radio, owned by Kollár, last year received more than one million euros from state advertising, in 20 hefty orders; this is more than all channels of state radio and the most-listened-to Radio Expres combined. For even less listened to and even less profitable Fun Radio, this can mean up to one-fifth of its annual sales. Thus, it cannot be said that state has no leverage for Kollár.

Last year alone, state authorities spent 20 million euros for EU-ads on TVs and radios; stemming from TIS’ calculation of officially published state contracts of broadcasters. The distributing of money culminated in the second half of the year – authorities ordered EU ads worth €15 million.

When looking closer at the distribution, one gets an even stronger suspicion of behind-the-scenes deals. JOJ TV and radios close to J & T financial group took more than 40 percent of the package, while another one-fifth went to the TA3 news TV, bootlicking the government. Thus, JOJ TV alone got more than twice as much compared to the more watched and more influential TV Markíza. Among radio stations, Fun radio dominates; although it is only the third most listened-to, after Expres and Radio Slovensko. There is hardly any connection between orders and the market share or prices offered.

We can see, looking at two specific orders, how easy this distribution under current rules could have been made.

When ordering an advertisement, an exemption from the law is used; and so no open tender is made (and media thus do not have to prove who owns them in reality). Instead, a so-called market analysis is carried out – meaning you ask someone you choose arbitrarily to make it. A randomly selected huge order for an EU ad to support employment – worth €360?000 from last November shows how  subjectively market researches/analyses are made. Out of three media addressed three received the orders: €216,000 TV JOJ, almost €100,000 TA3 (owned by Ivan Kmotrík) and almost €50,000 public Slovak radio. The Labour Centre approached the TA3 at first, at end of October. Only after having received the offer from TA3, the Centre addressed also JOJ TV and then the RTVS, announcing they have three workdays to send in their offers. The ad was to launch en masse two weeks later, and end by Christmas time. According to the minutes from an evaluation of the offers, no real evaluation took place. The office signed contracts directly with three media approached, and prices and amounts were exactly the same as stated by media. That means this process is nothing more than direct ordering without any relation to the expediency of the money spent. Labour Centre claims that it had selected also based on the capacity of TV broadcasters to accept ads but it failed to provide any documents proving that some media had refused state ads.

Similarly non-standard was the ordering of ads for local media. In October and November 2015, the Environment Ministry signed contracts worth €1.2 million with seven local television stations which will broadcast, until the end of January, an average of 33 hours of journalistic shows produced by TA3 about how excellent projects financed from EU-funds to protect environment have been built.

The ministry approached only seven TV channels –one for each region – meaning there was no competition, again. For example, the Bratislava Region was covered by Západoslovenská televízia (western-Slovak TV) of the Marvel media company which was long on the verge of bankruptcy. For last year, it reported sales only worth €2,500. Televízia Bratislava, much more viable and more watched, has not been approached at all, its CEO Mária Urlandová confirmed.

Ján Vanin of the Environment Ministry’s office claims that they selected “the strongest broadcaster for each region“ according to criteria including obligatory broadcasting of news and publicistic journalism, as well as technical form of broadcasting (cable, microwave, digital and online broadcasting). Neither price, nor the outreach among audiences were included in criteria, again. Five of seven local stations received from this single three-month order incomes vastly exceeding their typical annual sales. One can hardly imagine any bigger medial dependence on the state than this. On the national level, EU orders are creating a mess: state money covered about one half of yearly income for the TA3. On the local level, this means the deal of a decade, though, seemingly deciding on which of the local media survive ultimately.

As several people have noticed, mass placement of orders is connected with the overall weak drawing of EU funds on one hand, and the so-called publicistic journalism is used for this purpose. Apart from poor effectiveness, the issue of buying the favour of media via such orders appears again, which is, combined with the upcoming general election, a deadly combination. For example among publicistic journalism – to be shot and broadcasted by local televisions again and again – mayors for the ruling Smer party prevail.

In the selection committees for EU ads, members are usually spokespeople and other officials from press departments (which is true for both above-mentioned orders). Yes, those people who are normally under the fire of media questions now decide who will receive millions of euros without clear criteria… A miracle if they allocated them to media which are gunning for them most. And what can be the impact of this phenomenon on the ability of journalists to critically watch government? There are several solutions. Ideally, Brussels would order its ads itself, as it is clear that state authorities will either abuse orders or do a sloppy job. And if the state really has to do it, then let the European Commission have direct control over criteria and allocation. Also the dividing of orders into smaller ones and ban on ordering without selecting from several bidders would almost surely be more effective as well.

In this case, we cannot do much about it anymore. But next time you notice an EU ad in your media, consider what price news reporters must have paid for it – and accordingly, evaluate it as ”independent”.

If you are as worried as we are about the state buying ads to influence media coverage of politics, support the work of Transparency International financially. We would like to continue tracking who influences media behind-the-scenes. Thank you!