“For the first time in history the number of cars produced in Slovakia exceeded 1 million,” Juraj Sinay, president of the Slovak Association of Automotive Industry (ZAP SR) said at a press conference on January 11, adding that Slovakia remained to be the country with the biggest number of cars produced per 1,000 inhabitants: 184, an increase from last year’s 179 cars.

Sinay refused to specify the exact number of cars produced as only two of three carmakers in Slovakia have already revealed their results for 2015.

Kia Motors Slovakia in Teplička nad Váhom produced 338,020 cars and the Trnava-based PSA Peugeot Citroën made 303,025 automobiles last year. This means that VW Slovakia in Bratislava had to manufacture more than 358,955 cars. The latest revealed data put that it manufactured about 202,780 cars during the first half of 2015.

“We will reveal the results in March,” Volkswagen Slovakia spokesman Vladimír Machalík told The Slovak Spectator, while he also refused to specify the impacts of the diesel emissions scandal. “In any case, the year of 2015 was very successful year for us.”

Jozef Bačé of Kia Motors Slovakia described 2015 as very dynamic with investments exceeding €110 million. These went into launch of improved Kia Cee’d models and the new generation of the Sportage model. Car production rose by more than 4 percent when the production of engines increased by more than 18 percent.

“Car production [in Kia Motors Slovakia] has been constantly growing the last six years,” said Bačé. “Cars produced in our plant cover 56 percent of the sale of all Kia models sold in Europe.”

PSA spokesman Peter Švec said the restyled Peugeot 208 propelled production at the Trnava plant to last year’s record numbers when this model made up 85 percent of the total production. The rest accounted for Citroën C3 Picasso. In total, the plant increased the car production by 18.7 percent as compared to 2014.

“Carmakers in Slovakia benefited last year especially from the growing European demand for new cars that more than fully compensated for the decline on non-European markets,” said Ľubomír Koršňák, analyst with UniCredit Bank Czech Republic and Slovakia, as cited by the Hospodárske Noviny economic daily. 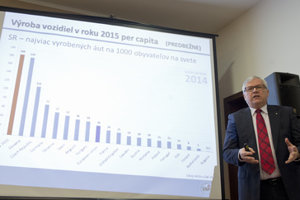 Read also: More than million cars were produced in Slovakia in 2015 Read more

ZAP expects that carmakers would manufacture more than 1 million cars also this year while Sinay recalled that the British carmaker Jaguar Land Rover (JLR) that will build a brand new plant near Nitra will start producing cars in late 2017 or 2018. The production capacity of the JLR plant near Nitra is planned to start with 150,000 cars and it might increase to 300,000 cars.

Švec specified that PSA plans to produce in 2016 less cars than one year ago, about 280,000, though it will begin making a new model.

“For now we will not reveal its name, but it is a model that will be a flagship of Citroën,” said Švec, adding that this will strengthen the focus of the Trnava plant on production of small passenger cars. “This is our priority; we want to be one of the best in the world in this category.”

In the meantime the carmaker ponders a launch of the fourth shift in Trnava and thus hiring additional 800 workers. This should increase the production capacity to 360,000 vehicles between 2017-2018.

The carmaker also continues in drawing sub-contractors to the region, and Mecaplast will build a €50 million production plant next to the carmaker in Trnava.

Švec specified that the share of sub-contractors from Slovakia and central and eastern Slovakia should increase to about 85 percent thanks to the new model to be produced in Trnava while in case of Peugeot 208 it is somewhere between 40 and 50 percent. The PSA’s plan is to increase the share of local sub-contractors from Slovakia and its vicinity to more than 94-95 percent within three to four years.

In terms of sub-contractors, ZAP sees the biggest problems their uneven distribution when most of them are located in western and central Slovakia while building of the fourth carmaker near Nitra would not change the situation. Thus ZAP has repeatedly called for completion of the cross-country highway.

Another problem burdening carmakers is lack of qualified labour while ZAP hopes that elements of dual education to be implemented based on legislation adopted last year would help to bring more qualified workers to the labour market.

“The year of 2015 was the best year in registration of passenger cars in the history,” said Prepiak. “We did not expect such an increase and were pleasantly surprised.”

Other important categories grew too. Registrations of small utility vehicles grew 29.52 percent to 7,292 units while registrations of motor vehicles over 12 tonnes that include trucks for construction and transport grew 25.97 percent to 4,075 vehicles. Categories of buses and vehicles below 12 tonnes reported decreases but ZAP does not regard these categories as significant in respected to the number of units sold. In total registrations of new cars reached 90,061 vehicles, up 9.87 percent.

Prepiak specified that small and lower middle class of passenger cars dominate the passenger cars sector making up 58 percent while the sector of small SUVs increased too, up 28.19 percent to 18,203.

“Slovakia is a mountainous country and thus it has potential especially for the sale of such cars,” said Prepiak.

In terms of kinds of fuels used by passenger cars, petrol-fuelled cars of 41,583 units dominated. Prepiak pointed to a low increase in the sale of electric cars, by three to 52 vehicles. Of this number, private individuals purchased only five electric cars. The rest accounted for businesses.

Prepiak also highlighted the drop in production of CO2 by newly registered vehicles, down by five grams per kilometre.