SLOVAK President Andrej Kiska and his Hungarian counterpart János Áder paid homage to 41 Slovak soldiers and one civilian ministry official who were killed in a military aircraft crash in the Hungarian village of Hejce on January 19, 2006. 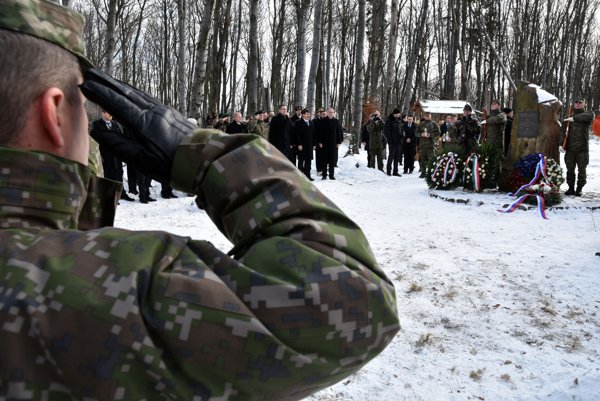 The soldiers were on their way back from a successful mission in Kosovo where they had helped protect peace and security, said Kiska.

“We’ve gathered here to say that we haven’t forgotten, and never will,” Kiska said, as quoted by the TASR newswire. “We’ll pay our greatest respects if we continue with the mission, strive for a good Slovakia and build a good reputation in Slovakia and abroad.”

The two presidents, along with defence ministers Martin Glváč and István Simicskó, laid wreaths at the site of the accident, the Borsó hill, and at a memorial at Hejce, where a ceremony was held. NATO Assistant Secretary General for Operations Patrick Turner, representatives of the Slovak and Hungarian armed forces and other institutions, as well as relatives of victims and locals were also present.

January 19, 2006, is the blackest day in the modern history of the Slovak armed forces, said Glváč.

“It’s incumbent on us to gather here every year and tell their relatives and friends ‘thank you’,” Glváč added, as quoted by TASR. “I think we owe that to them.”

Martin Farkaš, the sole survivor of the crash, also attended the ceremony.

“I find it very unfair, because it happened ten years ago, I’m alive, have a family, a beautiful daughter while all others were killed and didn’t get the chance to live on ... and I don’t know who I should be cross with,” said Farkas, a member of Slovakia’s armed forces to this day, as quoted by TASR.

The AN-24 military aircraft was carrying 28 soldiers returning from their mission in Kosovo as part of a regular troop rotation, along with seven members of support staff and eight crew members. The crash took place only some five kilometres from the Slovak border.