THE REPRESENTATIVES of nurses and midwives personally delivered to the Government Office a letter for Prime Minister Robert Fico, in which they call upon him to address the mass resignations of nurses. 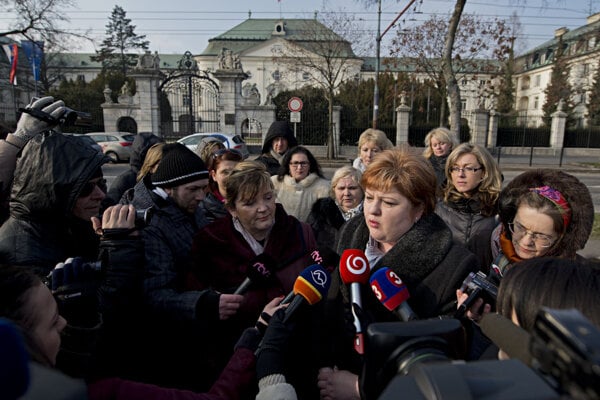 Head of nurses’ trade unions Monika Kavecká (second from right) and head of the Slovak Chamber of Nurses and Midwives Iveta Lazorová (third from right) in front of the Government Office (Source: TASR)
Font size:A-|A+

They were checked by two police patrols, which supervised them until the nurses vacated the premises, the TASR newswire reported.

The nurses warn that the real situation bears little resemblance to the sunny picture repeatedly painted by Health Minister Viliam Čislák. They referred to his January 17 performance in the political talk show O 5 Minút 12 (Five to Twelve) broadcast by the public-service RTVS, where he defended the steps adopted by head of Prešov hospital Radoslav Čuha, who, for example, called nurses on sick leave back to work or sent inspectors from social insurer Sociálna Poisťovňa to check on them, the SITA newswire reported.

Head of the nurses’ trade unions Monika Kavecká refused Čislák’s claim that nurses misused the situation and asked for sick leave, as reported by SITA. 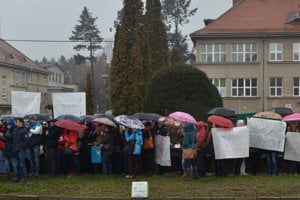 “Once again, we call upon you not to wait for February 1, 2016, when hundreds of nurses will leave Slovak hospitals, but use the weight of your office to intervene now and initiate a meeting with representatives of nurses and midwives ... Despite our interest in talks, since December 1, 2015, the minister has failed to meet us and has showen no willingness to arrive at an agreement,” reads the letter, as quoted by TASR.

Fico replied that nurses are not being ignored and that the Health Ministry is taking an active approach to negotiations.

“Further talks are pending,” he told a press conference on January 19, as quoted by TASR.

He respects the nurses’ right to a different opinion or “some form of protest”, although he would not have “left the patients” if he had been in their shoes. Fico pointed out that an additional €55 million has been earmarked for health workers’ pay hikes; although he understands that everyone would like to see more on their payslips, as reported by TASR.