PRICES of petrol and diesel at Slovak filling stations are falling in response to record low prices of crude oil on global markets. 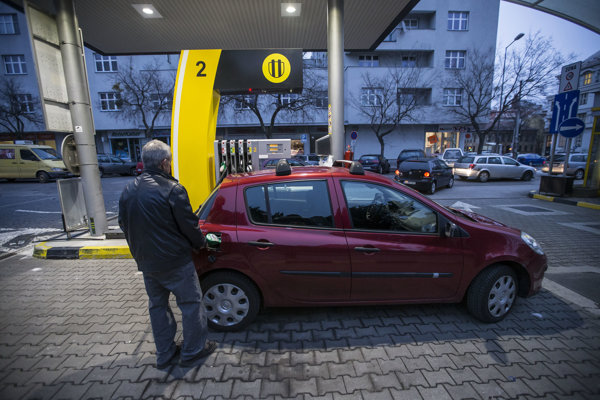 Slovaks are set to benefit from the cheaper fuel, and it could free up more spending in other economic sectors.

“Both consumers and producers could benefit from lower transport costs stemming from lower prices of oil,” Katarína Muchová, analyst at Slovenská Sporiteľňa, told The Slovak Spectator. “Disposable income of consumers could be higher as a result of lower costs in transport and the ensuing lower regulated energy prices.”

Muchová explains that Slovakia is a net importer of oil; therefore cheaper oil presents a positive for the country’s economic growth, but has a negative impact on inflation.

Drop in oil prices and associated drop in the prices of energy and fuel, along with food prices, were the major driver of the record low consumer price inflation in Slovakia, added Vladimír Vaňo, head of CEE research at Sberbank Europe.

“Up to this point, this benign consumer price development had a predominantly positive effect of increasing the real purchasing power of Slovak consumers, hence contributing to the recovery of final household consumption,” said Vaňo, adding that so far the potential threat of the deflationary spiral being instilled in the heads of consumers and producers has been out-weighted by the positive contribution of the higher real purchasing power to the domestic demand.

Ľubomír Koršňák, analyst with UniCredit Bank Czech Republic and Slovakia, has compared the reduction in oil prices to an impulse in the form of tax cuts for the non-commodity sector of the economy, but without an impact on public finances, the Sme daily wrote. This means that European economies should benefit from this.

Cheap oil has also other impacts as it decreases prices of other energy sources, like gas. But the biggest influence is on prices of motor fuels, which have reached a six-year minimum.

Dominika Ondrová, analyst with Poštová Banka specified that oil cheaper by roughly one half creates space for savings and people as well as companies may use money saved on purchases of motor fuel or energy for purchasing other goods or for other investments.

“Thus the consumption increases, which positively reflects in a growth of the whole economy,” Ondrová told The Slovak Spectator. “The decline in oil prices directly or indirectly touches upon each company and via this also consumers. Costs of production processes are lower and transport is becoming cheaper too.”

But this decline does not need to result in lower prices as some other costs rose last year. Moreover, not all vendors are willing to reflect the lower prices of oil or motor fuels in their prices of goods or services.

“It is only their individual decision whether they will exchange the higher profit secured by the unchanged price for an opportunity to address new clients via a lower price,” said Ondrová, recalling that also due to the cheap motor fuel prices Slovakia has seen negative inflation rates and a similar trend looks set to continue this year.

The average price of 95-octane petrol was some 11 percent lower during the first week of 2016, compared with the same period of 2015, Ondrová recalled. Diesel decreased even more – by as much as 18.5 percent – with diesel drivers refuelling at less than €1 per liter.

But the oil price makes up only part of the final price of motor fuels in Slovakia as taxes make up the rest.

Tomáš Novotný, analyst of the website Natankuj.sk, dedicated to monitoring prices for motor fuels, indicates that the decline of prices in Slovakia corresponds at 95 percent with the development of the prices on global markets.

“Here one should realise that margins of sellers of motor fuels are very low,” Novotný told The Slovak Spectator, adding that the sale of motor fuels is practically a supplementary source of revenues of petrol stations while these earn much more on supplementary services and the sale of other foods. “The only chance to increase them without irritating drivers is to do this during the time when prices are decreasing.”

Transport companies register pressure from the side of clients to reduce prices in response to lower fuel prices.

“Lower price of diesel enabled transport companies in a large extent to get into the black because prices for transport do not every time correspond with necessary costs,” Pavol Reich, head of the hauliers association Česmad, told The Slovak Spectator, adding that some companies have in their contracts a provision, a so-called fuel clause that changes along with the decreasing or increasing price of diesel after exceeding a certain percentage of the decrease or the increase of motor fuels.

Peter Bochnovič, owner of Boper transport company, estimates that cheaper diesel saves him about 5 percent of the total costs, but claims that transporters do not want to decrease their prices arguing that other costs increase.

“Many neighbouring countries have introduced the toll that increased our costs by about 12 percent,” Bochnovič told the Sme daily. “Nobody wanted to compensate us for this or only in a limited scope.”

Bus companies like Student Agency or Slovak Lines are already reflecting lower fuel prices in their fares or are considering to do so with part of the reduction ascribed to increased competition.

Why is oil so cheap?

Cheap oil currently on the market is the result of supply exceeding demand, Vaňo said. The sell-off in the crude oil market, which started already in June of 2014 and currently amounts to almost 76 percent was triggered and fueled predominantly by supply side factors: glut of oil deliveries which exceeded the aggregate demand.

“This over-supply has been a result of the vast expansion in shale oil drilling in North America, as well as due to the long-term non-compliance of the OPEC cartel members with the agreed production quotas, which have been consistently exceeded,” Vaňo told The Slovak Spectator. “Moreover, facing the competition of the shale oil producers, the OPEC cartel members failed to agree on curtailing their production.”

Although such a move might have taken off some of the negative pressure on crude oil prices, at the same time it would endanger the market share of the OPEC oil producers on the global market – a scenario that especially the Middle East producers were not content with, partly also due to their relatively low production costs, added Vaňo.

“Early this year, emerging doubts about the strength of the global economic recovery, especially weakening growth in China has contributed to further negative pressure on oil prices,” said Vaňo. “The return of Iran to the global markets, albeit it was anticipated by the markets, was the most recent catalyst that pushed the Brent crude oil price below the 28 USD per barrel mark, the lowest level since the beginning of 2004.”

“Even though fuel prices depend on prices of oil, there are a number of other factors that play a role in their price formation,” said Muchová. “Furthermore, fuel prices may react with some delay to changes in oil prices. Given that OPEC does not seem to be in any rush to limit supply and with Iran’s return to the market, oil prices are likely to remain at low levels in the near future. The Chinese slowdown also plays a role on the demand side, mainly due to worries about its further pace.”

But, according to Novotný, it is very difficult to estimate by how much Slovak drivers are likely to save.

“Based on so-far information it seems that petrol and diesel might become cheaper by one or two cents,” Novotný said.