SEVERAL hundred nurses from the Prešov hospital, their relatives and also Košice medical workers marched on January 20 around the centre of Prešov. 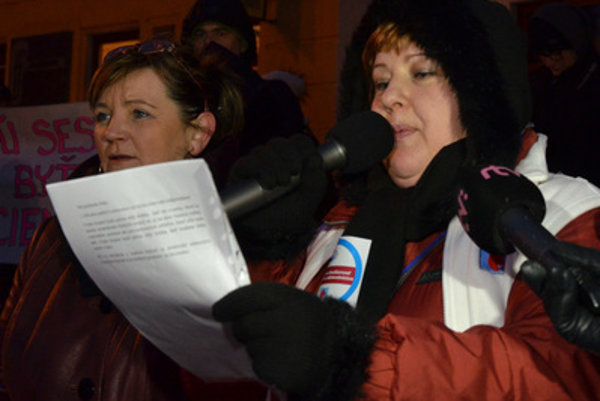 Their goal was to point to the dire situation of the Teaching Hospital and Polyclinic of Ján Adam Reiman in Prešov, with the slogan “Let Us Save the Hospital in Prešov”. Organised by the Labour Union of Nurses and Midwives and the Slovak Chamber of Nurses and Midwives, the march involved candles, lanterns, whistles and placards.

The candles symbolised an act of reverence and express “sadness and desperation as we are losing nurses”, chair of the Labour Union of Nurses and Midwives Monika Kavecká told the SITA newswire.

It was in Prešov that the highest number of nurses filed their resignation notices, demanding salary hikes and better working conditions. Some of them then withdrew their notices and faced the obligation to pay €3,300 as a fine for doing so. Prime Minister Robert Fico reacted by saying that nobody can really demand them to pay this sum, and Kavecká retorted that this is a standard tool of unionists all across Europe that was also used against doctors during their 2011 strike, as well as Žilina nurses last year.

The government tries to distract attention form the crucial issue, according to Kavecká, and that is the looming lack of nurses from the beginning of February when their notices become effective. She added that unionists are ready to negotiate but there is nobody to negotiate with.

The hospital and its management distance themselves from the march, Prešov hospital spokeswoman Renáta Cenková told SITA, adding that it is the protesting nurses who have complicated the situation in the hospital. “In this situation, we think that them organising an event on a square does not make much sense; it would be much more meaningful if they returned to their patients,” she added. The employees who did not file notices signed a “petition for Keeping the Hospital in its Original Scale” and delivered it to hospital management, signed by 832 staffers. Still 318 nurses remain in notice period, 77 withdrew their notices by the afternoon of January 20, and 88 new nurses have been hired. In total, 179 nurses are not working, as they are on sick leave or officially treating a (dependant) family member, of which about 95 percent are those who resigned.