Dissatisfied teachers vow not to bow

Minister Draxler claims that the current government cannot commit the new government that will emerge from the election in March to undertake concrete measures. 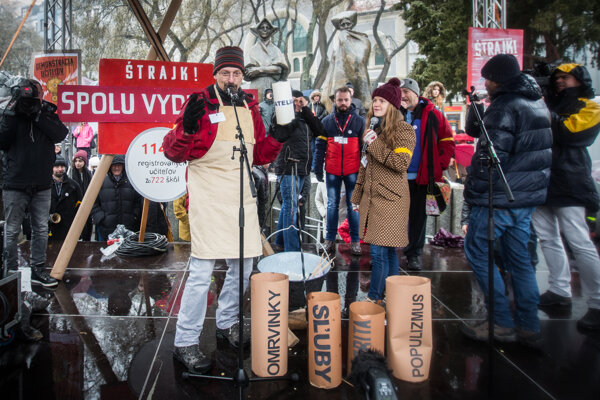 An estimated number of more than 2,000 teachers from all over Slovakia supported also by nurses and medical trade unions came to Bratislava on January 25 to express their disagreement with what they see as the long-term ignoring of their demands.

Teachers are now in an open war, according to Vladimír Crmoman from the Slovak Teachers Initiative (ISU).

“We have our weapons. Our biggest weapon is that we stick together,” said Crmoman at the beginning of his speech on Slovak National Uprising (SNP) Square as cited by the TASR newswire.

Crmoman said that politicians won’t break teachers, as they are teachers from their hearts. He called on the participating protesters to mobilise those who are still sitting on the fence.

“We’ll hold out together,” chanted the crowd several times. 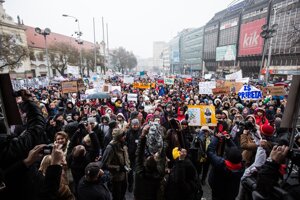 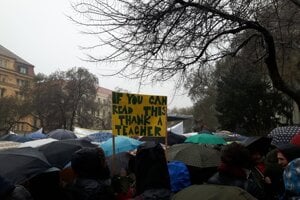 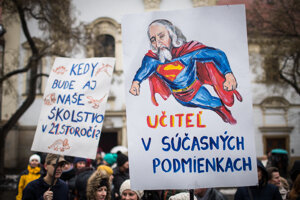 Teachers held signs with slogans such as ‘A meeting of empty pockets’, ‘Don’t put on a spectacle for us’ and ‘Dignity for the teaching profession’. They rang bells and whistled.

“They [the government] should think through as to what they will do next. We’re ready to negotiate,” said Branislav Kočan of ISU as cited by TASR. He added that teachers are ready to hold firm “until the end”.

ISU’s demands are the same as those that the Slovak Teachers Chamber stipulated back in October. It wants increases in the salaries of all teachers and other professional employees in regional education by €140 per month as of 2016 and by an additional €90 as of 2017. It also demands an increase in the budget amount reserved for education.

The crowd, also including teachers from as far away as Košice, Žilina, Banská Bystrica as well as Nitra and Trnava, then went on to the gates of parliament. The rally concluded at around 13:15.

“I didn’t expect this many colleagues to show up,” said Crmoman. “We filled the entire square ... roads. I believe the whole society must’ve taken notice of something going on here and of teachers making it clear that they want change at last, not promises. And we want the change now.”

Education, Science, Research and Sport Minister Juraj Draxler said after the rally that he acknowledges everybody’s right to go on strike, but pointed to the timing of the protest.

“The government cannot commit the new government that will emerge from the election in March, a few weeks to go before the election, to undertake concrete measures,” said Draxler, and gave thanks to teachers who didn’t join the initiative.

The teachers’ strike resulted in the shutting of 179 schools on January 25, which amounts to 2.66 percent of all schools and school facilities in Slovakia, said Draxler. Earlier in the day, ISU announced that 301 schools remained closed due to the strike.

Of 6,724 schools and school facilities in Slovakia, the largest number of those shut was in Bratislava Region – 43, according to the Education Ministry. The lowest ratio of the facilities with no classes on Monday was in Prešov region – a mere 0.32 percent, or four schools in total.

The minister also recollected that the salaries of teachers have been on the rise, that lay-offs of teachers for summer holiday has been outlawed, and that an authority to protect teachers has been set up. Paperwork has been reduced, too, and the ministry is also working on key documents to enhance continuing education for teachers. Teachers will also be able to take part in the drawing up of the programme of the next government, he said.

Responses of the opposition

Opposition parties Most-Híd, the Christian Democrats (KDH), OĽaNO, SDKÚ and extra-parliamentary party SKOK have endorsed the strike. Most-Híd chairman Béla Bugár said that teachers have the right to go on strike with no heed to whether or not an election is coming up.

“We’ve got to give our education sector a vision that will emerge from a broad social agreement across the entire political spectrum,” said Bugár as cited by TASR. “The only indicator for how successful the government and ministers are must be to what extent this vision is being implemented. Such a vision should provide a permanent direction for positive changes in the education sector with the purpose of increasing the quality of the entire system and its parts, including the remuneration of teachers.”

KDH MEP Miroslav Mikolášik said that teachers are not clamouring for something extra; rather, they only want to lead decent lives and stop being insulted by the state, which should protect them instead.

“Prime Minister Robert Fico has disqualified himself and damaged Slovakia’s credit,” said Mikolášik. “While some time ago he did show some willingness to help teachers, for whom he now says no money is left, he's made it clear most recently that he has no such plans and has no respect for them.”

OĽaNO-NOVA also supported the teachers’ strike, writing on its profile on a social network that “education is the best gift we can give to our children”.

According to SDKÚ, the strike involves the entire context of education in Slovakia.

“This is why the teachers’ protest isn’t only about their remuneration, but about how the youngest generation will be brought up in the future,” said party chairman Pavol Frešo. “The thousands of teachers on strike pointed to their desperate position today [Monday], but the Slovakia-wide wave of anger and frustration is a consequence of the situation in which the entire education system has found itself.”

SKOK chairman Juraj Miškov urged teachers not to succumb to pressure from the Government and some of their colleagues.

“Don’t give in to the pressure and bossing at schools,” said Miškov. “You’re not doing it for yourselves, but for the future of Slovakia, the children of us all. Education must be a priority. As a parent I'm rooting for you.”

Another rally is scheduled to take place in Levice (Nitra Region) this Wednesday and in Košice on Thursday. The disgruntled teachers also seek to meet parents and the public in general so as to explain their further steps to them.