WHILE prices of electricity as a commodity are falling, Slovak consumers have not seen a corresponding reduction in their bill. 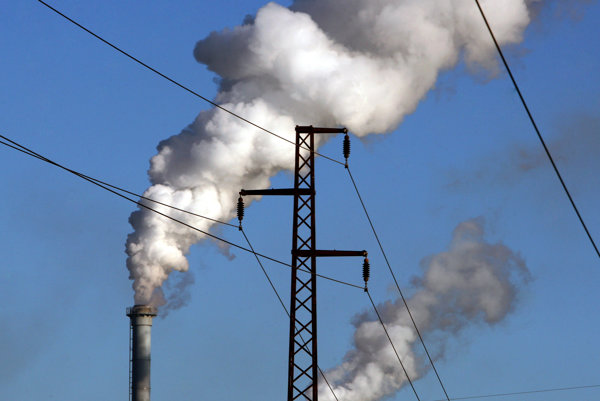 Tariffs and taxes set by the state make up much of the difference and while this is not unique to Slovakia, analysts are calling for a repeal of these fees to make the economy more competitive.

“Electricity prices, especially of commercial consumers in Slovakia, belong among those highest in central and eastern Europe,” said Martin Vlachynský, analyst of the Institute for Economic and Social Studies (INESS) think tank. “This is for several reasons, but one of them is that various public policies are conveyed onto end-prices of electricity for consumers.”

“The state has really put financing of its priorities in the electro-energy sector on the shoulders of end consumers,” Jozef Badida, analyst from the Energie pre vás website, told The Slovak Spectator, specifying that these priorities include support for extraction of local coal, renewable energy sources, nuclear energy, highly effective production of electricity and heat from Slovak biomass, Russian gas and imported coal. “We all are paying for these state priorities in the end prices of electricity.”

Lenka Ferenčáková, chief-editor of the website Energia.sk added that prices for the commodity oscillate, for example at the central-European power exchange PXE, below €30/MWh for this year. The final consumer price then includes transmission and distribution costs, but there is still a large portion that is open to political decisions and obligations at the national or European level.

To quantify the component of electricity prices onto which governmental policies have a direct impact INESS has created its own term – electric tax. It has calculated that this tax makes up 16.3 percent of the price an average family pays annually for its electricity consumption. This money flows into state pockets while INESS would like to see these payments excluded from the electricity price. At present the money is used to subsidise the coal industry, for example.

Though companies complain about high electricity prices, INESS admits that comparing prices is not an easy task.

In case of households there are three main groups of consumers: households using electricity just for lighting and electric appliances, those who use it for heating of water and those who also use it for heating. These prices are still regulated, by the Office for Regulation of Network Industries (ÚRSO) while it regulates also prices for small and medium-sized enterprises.

The electricity market for large companies has been liberalised in Slovakia, but as Vlachynský said: “You have a different negotiation position when you have an aluminium works or a bakery.”

Within the European Union electricity prices are monitored by Eurostat, but according to INESS this statistic should be taken with a pinch of salt as each country has its own system of tariffs and fees that may distort the results.

ÚRSO has already pointed out that the methodology used does not take into consideration, for example, various ways of including or not including support of renewable energy sources into the end prices.

Miriam Žiaková, spokeswoman of the Economy Ministry, added that unification of the methodology of collection, processing and interpretation of data and information will be one of the dominant questions for which the planned Energy Union represents a hope for a solution. She added that while in Slovakia costs for support of production of electricity from renewable energy sources or local coal are shared by all consumers including industrial ones, in some other countries such consumers enjoy relief which reflects in the end price for ‘privileged consumers’ and in the structure of the price.

Based on Eurostat, Slovakia in the category of corporate consumers with annual consumption between 500 and 2,000 MWh had electricity prices slightly below the EU28 average during the second half of 2014.

“But when we narrow the view on the 11 countries of eastern Europe, end prices for companies in Slovakia, depending on consumption, rank between the first to third place,” said Vlachynský. “These prices put Slovakia at a disadvantage because these are countries with which we compete for investors.”

Statistics compiled by Europe’s Energy Portal, using a different methodology than Eurostat, show that end prices of industrial consumers with consumption 2,000 MWh per year put Slovak end prices above the EU28 average, according to INESS.

Some of these are paid within the so-called tariff for operation of the system while Vlachynský pointed out that this one embraces support for renewable energy resources and thus reduction of CO2 produced when generating electricity as well as support for a brown coal mine, whose only client is the power plant in Nováky – one of the big generators of CO2 in Slovakia. This tariff has increased from about €5 per MWh in 2005 to currently about €22 MWh.

INESS opines that this tax makes up 16.3 percent of the price an average family using electricity only for lighting and usage of electric appliances, but not for heating of water or heating, or €26.45 per MWh – about €60.8 per year.

“For the time being consequences of erratic political decisions dating back decades have been emerging more and more intensively in the Slovak economy,” the study reads, adding that mistakes have been bringing consequences only after time while their impacts increase costs for production and supply of electricity.

Thus INESS has prepared five recommendations for the economic policy in the energy and electric sector. These include (1) halting use of the energy sector as a fast and cheap source of money for financing of government policies; (2) abstaining from direct or indirect subsidising of new energy sources; (3) elimination of the electric tax and finance, for example support of workers of brown coal mining directly from the state budget, (4) ending the price regulation for households and SMEs and (5) collaborate with partners to create a long-term energy strategy.

“ÚRSO does consider the Electric Tax study by INESS to be a relevant contribution to the discussion about regulation of energy prices in Slovakia,” ÚRSO spokesman Miroslav Lupták told The Slovak Spectator, adding that INESS has not asked ÚRSO for background papers.

The office further points out that taxes are beyond its powers and that parts of the tariff for operation of the system are set by law and that the office must respect this legal provision.

“Prices of electricity in a large extent depend also on consumers; how they behave, for example the change of supplier which force their suppliers to reduce prices,” said Lupták. “Suppliers cannot make an excuse in terms of prices set by the office because these are maximum prices and if the price of electricity as a commodity is currently lower than the price included by the office in the set price, nothing prevents suppliers from reducing their prices.”

As of the beginning of 2016, ÚRSO reduced the maximum electricity prices for households by 1 percent and for SMEs by 1.1 percent.

In respect to the recommendations by INESS, according to ÚRSO, they have a political character and must be solved within legislation.

The Economy Ministry added that it does not interfere into performance of powers of the independent office - ÚRSO - that regulates prices of electricity, gas, heat and water.

In terms of other fees Žiaková said that subsidised production of electricity from renewable energy sources and local coal are a standard scheme within creation of the energy mix, i.e. the range of utilised energy sources, while not only Slovakia but also other EU member countries proceed in line with EU directives.

“The Economy Ministry has assessed also alternatives of coverage of the costs of the tariff for operation of the system from other resources including the state budget in order that proposed solutions are in line with the EU legislation pertaining to state assistance,” Žiaková told The Slovak Spectator. “But the Economy Ministry… must assess all potential proposals also from the viewpoint of (negative) impacts on other electricity consumers or the state budget where we currently do not see sufficient space for a solution.”

Ferenčáková believes that large consumers, either companies or public institutions, can benefit from unregulated supplies and clinch contracts on the basis of their own procurement.

“Thus the fight for these clients is the strongest and the most lucrative among suppliers,” said Ferenčáková.

She recalled that there already exists an official strategy for the energy sector while the Regulatory Policy is just being updated.

“At least these two documents should be put in accord and should reflect the opinions of as wide as possible group of market participants,” said Ferenčáková.

In case of deregulation of electricity prices for SMEs, Ferenčáková thinks that it would pay off to test this for more than one year as it had happened in 2012.